Here's where we tread into the pages with missing cards. Last week had our first missing card and this week we have two. I'm working on a solution to solve this problem and I'm very optimistic about placing something in the Bill Foster and Willie Wells slots before I put a bow on this weekly series. There's still eleven more pages to go . . . that's plenty of time! 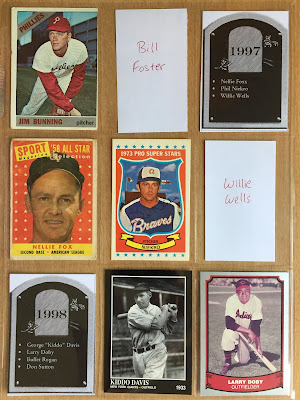 Here's this week's breakdown of of players and cards. 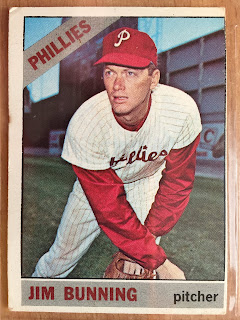 Jim Bunning, voted in by the Veteran's Committee, had a seventeen year career in the Big Leagues and was a ten-time All-Star. He pitched the majority of his career with the Tigers (9 years) and Phillies (6 years), but he also spent time with the Dodgers and Pirates. Four times Bunning led the league in strikeouts and he topped the AL in wins in 1957. For his career Jim Bunning was 224-184 with an ERA of 3.27.

No Card -- Bill Foster
Bill Foster played in the Negro Leagues from 1923 to 1937. He was a switch-hitter and a left-handed pitcher who was one of the top arms of the league. Foster is known for winning twenty-six consecutive games during the 1926 season. To win the pennant that year his team needed to win the last two games against the Kansas City Monarchs. Foster started and won both games of a doubleheader to put his Giants in the championship. He was known for not only being a hard thrower but knowing how to pitch and hit his spots. 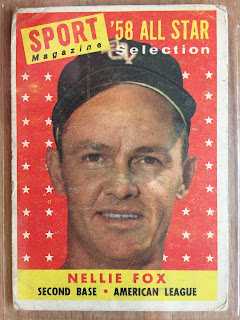 Nellie Fox debuted with the A's in 1947 and then played fourteen years with the White Sox before retiring with the Astros in 1965. During his time on the south side of Chicago, Fox was elected to fifteen All-Star contests, won an MVP in 1959 an captured three Gold Glove awards. Fox did all the little things to help contribute to a winning ball club, but he was known for his bat control and plate discipline. He topped 700 plate appearances six times in his career, yet Fox never struck out more than 18 times in a season. Whoa! Nellie Fox finished his career with 35 homers, 2,663 hits, a 0.288 batting average and only 216 strikeouts in 10,351 plate appearances. 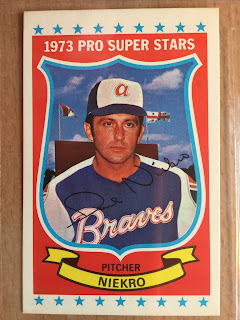 Phil Niekro pitched for twenty-four years, twenty-one of which were with the Braves. He learned the knuckleball from his father who was taught by a co-worker once the elder Niekro's arm gave out. Niekro took the pitch to new heights during his career and earned the name "Knucksie" along the way. Niekro won five Gold Gloves, was elected to five All-Star games and won one ERA title. Take a look at his age 40 season: he led the league in wins, losses, games started, complete games, innings pitched, hits allowed, home runs allowed, hit batters and batters faced. All at forty years of age! Niekro finished his career at age 48, but not before he fooled enough batters to earn 318 wins to go along with a career ERA of 3.35. 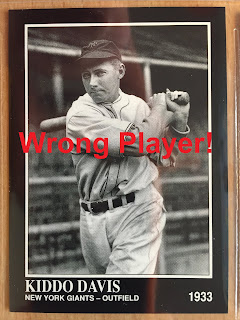 Argh!  This is a card of the wrong George Davis. I need a card for this George Davis, who did not go by Kiddo and played from 1890 to 1908. Davis was a switch-hitter who hit over 0.300 in eight consecutive seasons and helped the 1906 White Sox to a World Series. He also stole 619 bases, which ranks him 17th all-time. George Stacey Davis, an infielder, was a career 0.295 hitter who twice hit ten or more home runs in a season during the Dead Ball Era. 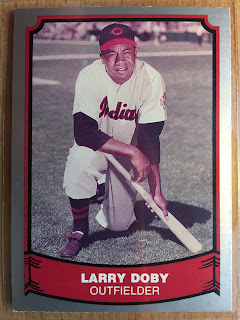 Larry Doby is probably best known as the American League's answer to Jackie Robinson. But, Doby was truly a great player in his own right. Doby was a seven-time All-Star who helped the Indians to their last World Series championship in 1948. Doby twice led the league in homers and once topped the AL circuit with a 0.442 on-base percentage. In all, Doby finished with a batting average of 0.283 and 253 homers during his thirteen year career.

Wow, I went into this post thinking I needed only two cards (Foster and Wells) and I leave it discovering I've had a card of the wrong player in the binder for a few months. Ouch. That one stings.

Luckily, the pure awesomeness of the '58 All-Star Fox and '73 Kellogg's Niekro helps to save the page. LOL