Getting Sniped and a Blaster of Platinum

Last night I lost out on an Ebay auction of a 2017 Topps parallel of Dan Vogelbach card I needed for my Vogelmonster player collection. Actually, I try to time it up each auction so that I can win at the very end, and I saw I had the winning bid for a split second, but somehow I lost. I'm blaming the bots. I refuse to use those Apps that bid for you at the end and I frown upon those who do. Talk about taking the fun out of things.

Someday robots will rule this world and I'll never be able to add another Vogelbach card to my collection again. But, I digress.

I had a good day at Dozer Park today keeping stats and afterwards had a promising meeting with the new head baseball coach, with whom I'll be working with this coming school year.

Simply stated, if I couldn't have my Vogelbach card I needed something to replace it and I was in a "spoil yourself" kind of mood. 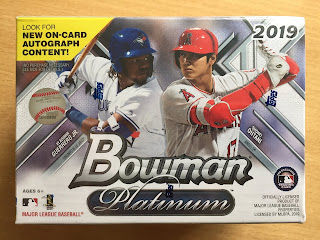 Everyone has been pulling sick mojo hits out of these blasters.

That's not why I bought the blaster. I was going to get one loose pack, but they had all been searched and strewn out along the card aisle. How does this happen when the cards are located at the front of the store perfectly adjacent to the self-checkout lanes? Argh. I refuse to buy cards that have been potentially damaged by another rude consumer. 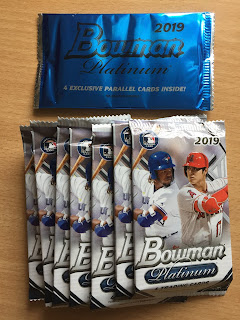 So, seven packs and a bonus exclusive parallel pack it is. Ooooooh!

I'll show the highlights of each pack and then list the other cards that didn't make the cut. 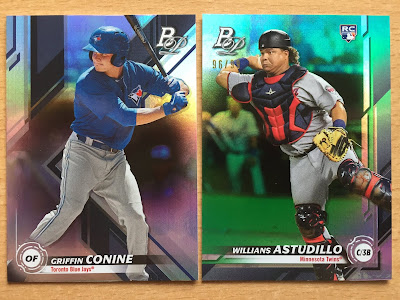 I worked the Peoria Chiefs versus Lansing Lugnuts game on Friday (7/12/19) and Griffin Conine was in the batting order. So, I actually know who this dude is! That's pretty cool.

I hate revealing the best card of the blaster so early, but the Astudillo wins it hands down for me. First, I love this guy! He has a cult following and I'm definitely part of said cult. Also, it's a green parallel numbered to /99. Most excellent! 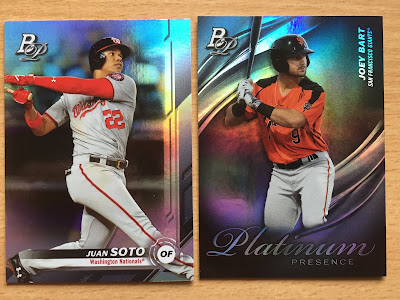 A second year card of Juan Soto is pretty nice. Here you can also see the Platinum Presence insert card of Joey Bart. I guess Bart is a pretty decent prospect to pull. 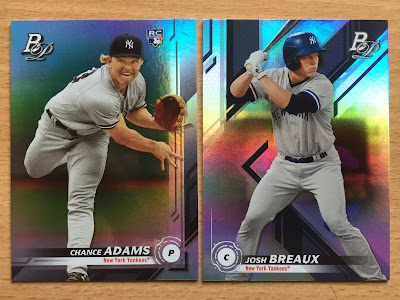 A couple of Yankee prospects? I like Chance Adams and the fact that he knows how to pitch. Josh Breaux isn't Luis Torrens, but a Yankees catcher prospect gets me bonus points, right? 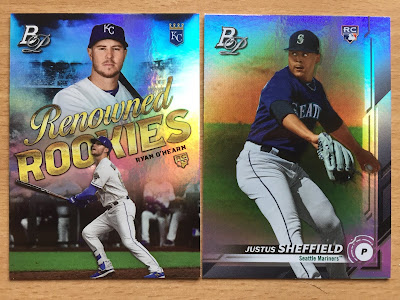 Renowned Rookies insert of Ryan O'Hearn. Meh. I do like the two photo design though.
Ooooh! Justus Sheffield!  I'm learning more and more about the Mariners prospects and this guy has potential. 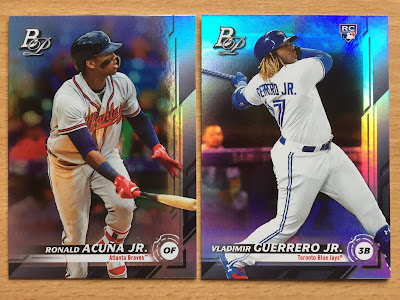 I think most collectors would be happy with this pack. A second year card of Acuna and a Vlad rookie. Not bad. If nothing else, I'm glad to have my first Vlad rookie. 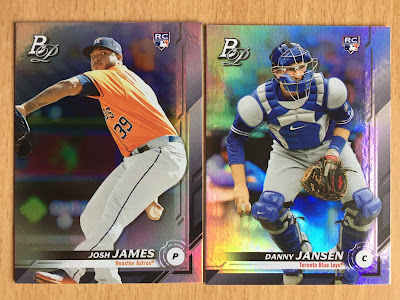 I had both Josh James and Danny Jansen on my initial fantasy baseball roster. I jettisoned each of them at some point. Hopefully, they pan out and make a name for themselves. 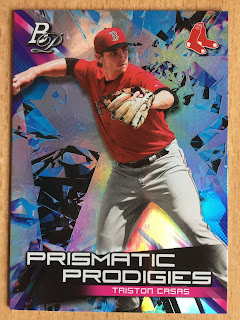 Prismatic Prodigies. Now, there's an insert set with a theme. Wowsers. Triston Casas has an 0.840 OPS in the Sally League. There's some potential there.

The one lonely card that didn't make the cut: Ronny Maurico (Mets) 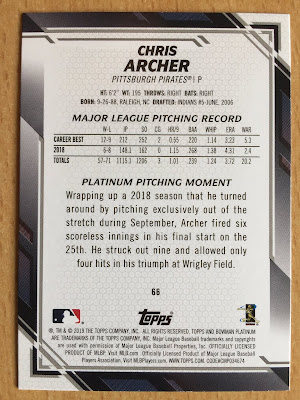 This pack was my least favorite, so you get the back of a Chris Archer card.  Hmph. 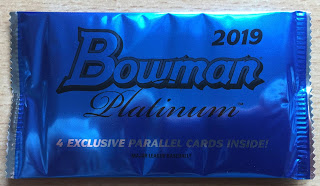 And now to the "4 Exclusive Parallel Cards." 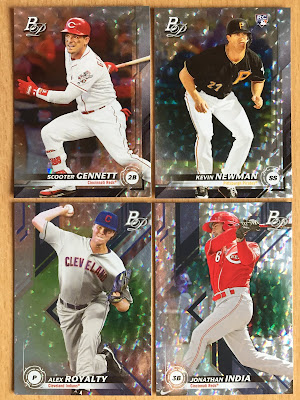 The broken ice pattern of the parallel makes me a little giddy. I'm a sucker for three things in this crazy cardboard world of ours: 1. Shiny . . . 2. Well-loved Vintage . . . and 3. Vogelbach cards.   Gennett, Royalty, Newman and India aren't the best names, but the cards sure are shiny!

Well, I'm not sure this blaster eased the pain of being sniped on my Vogelmonster Ebay auction, but it was a fun rip. If you see something that would look better in your collection than mine let me know. The Astudillo, Bart, Vlad, Sheffield, Soto, Acuna and Yankee prospects are sticking in my collection or are ear-marked for other bloggers, but everything else is available.