We had a lengthy run of wonderful pages sporting gorgeous vintage recently. I don't know that I would label this page as "wonderful" though. Take a peek and see what you try to change about this page. I'll have my thoughts at the end of the post. 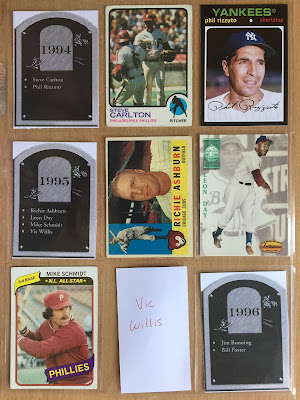 Here's the breakdown of the players: 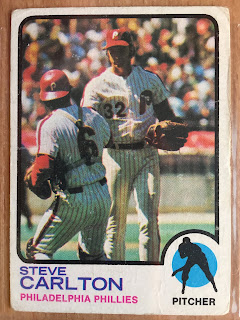 Lefty. What a cool nickname. Steve Carlton pitched from 1965 to 1988 and his best seasons were with the Cardinals at the beginning of his career and then the Phillies for the next fifteen seasons. Carlton won four Cy Young awards, one Gold Glove, and the pitching Triple Crown in 1972. He was was elected to ten All-Star games in all. Carton is fourth all-time in strikeouts and he finished with 329 wins and a 3.22 ERA. 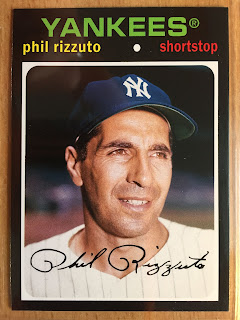 Phil Rizzuto had two seasons under his belt as the full-time shortstop for the Yankees before taking a hiatus and spending three years with the Navy during WWII. He won an MVP in 1950 and was elected to six All-Star teams during his thirteen year career. Rizzuto, a career 0.273 hitter, helped the Yankees to seven World Series Championships, including five in a row from 1949-1953. 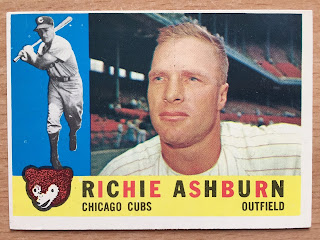 I would love to get a Phillie card of Richie Ashburn so I can plug this Cub card into my Cubs FrankenSet. Ashburn played fifteen seasons, with twelve of those being with Philadelphia, two with Chicago and one with the Mets. Ashburn didn't have much power, just 29 career homers, but he led the league in walks multiple times and never struck out more than fifty times in a season. The six time All-Star won two batting titles on his way to collecting 2,574 hits and a 0.308 batting average. 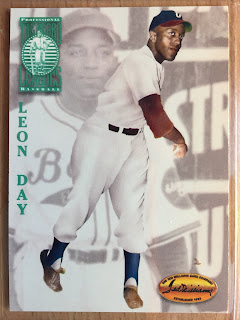 Leon Day was one of the top two pitchers in Negro League history with Satchel Paige being the other. It was said that his fastball consistently sat in the 90s and that he probably won more than 300 games during his career. What sticks with me the most after reading Day's biography was that he was informed of his election to Cooperstown at 92 years of age and he died just five days later. My favorite quote of his is, "When they told me they was gonna pay me to play baseball, I said they must be crazy. I said I'd play for nothing." He obviously loved the game. 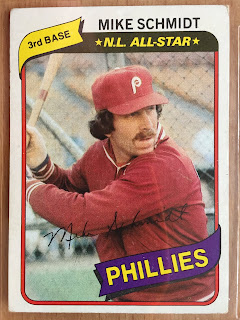 Mike Schmidt, for my money, is the best third baseman of all-time. Schmidt won six Silver Slugger awards, was a three time MVP, captured ten Gold Gloves, won the World Series MVP in 1980 and was elected to twelve All-Star games. He led the NL in homers eight different times and he wasn't afraid to take a walk, as evident by his 0.380 career OBP. Schmidt retired in 1989 with a 0.267 career batting average and 548 home runs.

No Card -- Vic Willis
Vic Willis pitched thirteen seasons, from 1898-1910, with the Boston Beaneaters, Pirates and Cardinals. Like many of the better pitchers of the era he would log over 300 innings, post relatively low walk and strikeout ratios, and top twenty wins. Willis' best season was in 1902 when he went 27-20 with a 2.20 ERA and led the league in games started, complete games, saves, innings pitched (410) and strikeouts (244). On a side note, he did not allow one single home run during the 1906 campaign in which he recorded a 1.73 ERA over 322 innings. Impressive! Willis finished finished his career with 249 wins and an ERA of 2.63

There's a couple of quality cards on the Page 27, but in my mind there's definitely some upgrading to be done. The first priority would be to track down a Vic Willis card. Willis has a couple of T206 cards, which maybe I can find a reprint of, but not I'm spending big bucks on a Hall of Famer I didn't know anything about until this post. Secondly, who remembers Richie Ashburn as a Cub? Lastly, I should be able to find an affordable vintage Rizzuto at some point. Right?

My favorite card is of Mike Schmidt in the batting cage followed closely by Steve Carlton shaking his battery mate's hand after a win. Maybe that's not what's going on there, no? Regardless, there's some definite talent on this page.