Let's be honest here. Not all trade packages are created equal.

I received one the other day that has to belong in my Top 10 all-time. Now, that's saying something because I've been swapping cards with 136 different "friends of the blog" for over eight years now. Yes, I keep track. I am a numbers guy after all.

Jeremy, from the ultra-creative Cards That Never Were blog, reached out to say he had some cards I might find useful.

For starters, he sent me the last eight cards I needed for me 1988 Topps set build. This is my second '88 set. I finished the first one when I was eleven and this most recent one was from a conglomeration of collections I had inherited. 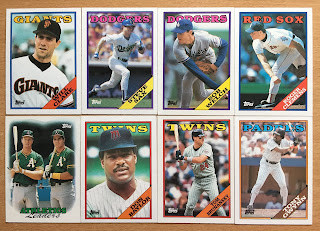 Here we have an odd pairing, but it's the pair that finish off my first 1990 Topps set. Awesome! 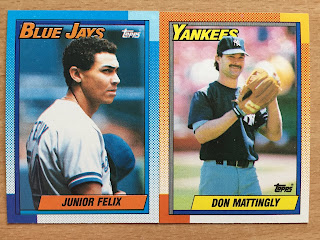 Also in the package were cards for my Brook Kieschnick player collection. 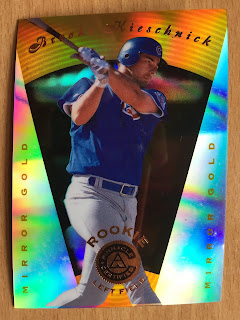 The card above is very chromey, and like most early chrome cards it is very curly. No worries, for it will find a permanent resting spot in a binder page and it will eventually flatten out. 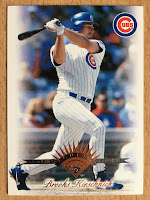 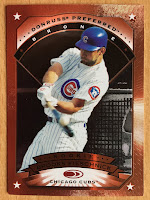 All three of the Kieschnick cards, Pinnacle, Leaf & Donruss, are from 1997. I miss the days of multiple card brands!  I'm now up to 95 different cards of the Cubs' former #1 draft pick.

Customs!  Jeremy specializes in making cards to recognize those players who have been snubbed. 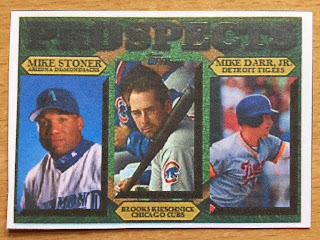 I guess Brooks has been left out of a few Topps sets during his playing days! LOL 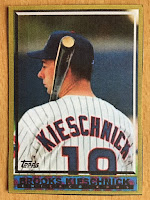 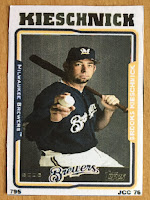 The 2005 Topps card of Kieschnick with the bat on his shoulder and the 4-seam fastball grip is an awesome photo selection for the two-way athlete!

I love my prospects. Oscar De La Cruz seems to be over his injury concerns and is pitching well in the minors again. 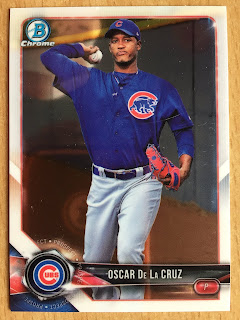 I suppose it isn't totally out of the question that we see him in Wrigley sometime later this year.

Alright, onto the best part of the package!

Yep, the best part wasn't even meant for me, it's for Roberto! You can read about the Roberto Batista story here and here.

I summarized the details Jeremy gave in his emails and my internet sleuthing into one note for Roberto: 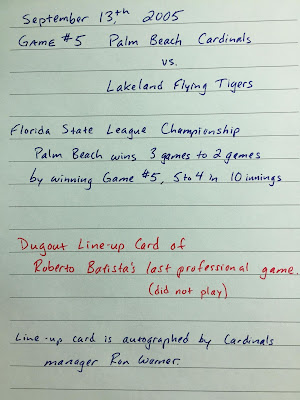 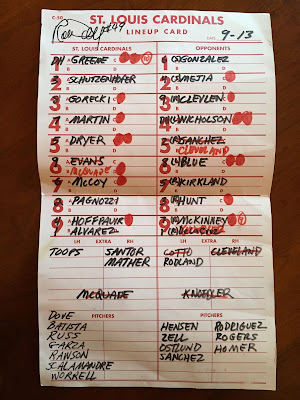 How cool is that? The only thing better would have been if Robert had pitched in the game. Shame on Ron Warner for not pitting Roberto in the championship clincher.  Also, check out that bullpen for Palm Beach. SEVEN lefties and not one right-hander? How odd.

I gave the line-up card to Roberto yesterday and he was as grateful as ever. Truth be told, I think he's a little puzzled why people he doesn't know are giving him things from his playing days. Bloggers are just giving bunch!