My wife and I capped off 2018 with a much deserved vacation to Belize last week.

Day 1 was a travel day. We flew out of Peoria and had a short layover in Dallas before landing in Belize City. We used our newly acquired Global Entry/TSA Pre-Check cards, which I highly recommend because it speeds of the process of going through TSA and creates less hassle. 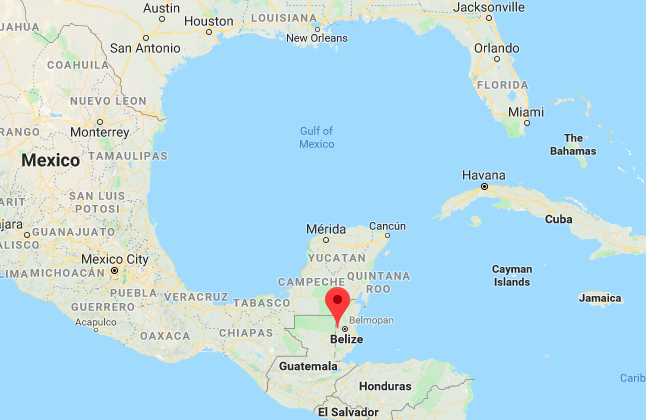 I've never flown somewhere and had a driver waiting for us before. That was a new experience that I could get used to. Wayne our driver, a chatty fellow who introduced us to Belize, was hired by the lodge for transportation. After 73 miles, which took 2 hours on a sub-par highway system, we found ourselves just outside the city of San Ignacio. 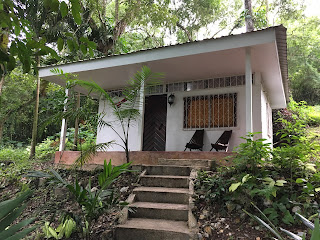 Our accommodations were quaint, but they suited our needs just fine. Roosters were our wake up call, parrots and toucans were talkative during breakfasts, and howler monkeys were howling during the late afternoons. The vegetation was amazing. Plants that my wife keeps as house plants in Peoria were growing all over in their natural habitat.

On Day 2 we went to the Barton Creek Cave with our tour guide, Dimas.
Dimas sat in the back and did all the rowing through the mile of the cave that was passable. I sat in the middle and held a battery powered light and Laura sat in the front. We had to "limbo" under stalactites in places, were dripped on by "holy water" and were startled by bats. Dimas gave us the history of the cave and pointed out Mayan artifacts whenever possible. It was a terrific adventure.

Afterwards Dimas took us to a waterfall and we had lunch. The water was about 75 degrees and a little chilly, but that didn't stop us from diving in! 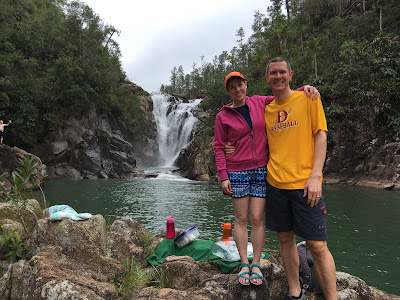 How about a quick picture of a couple of our meals during our stay? 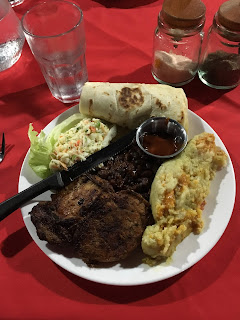 This one has a burrito, slaw, beans in the middle, roasted and spiced chicken, and some sort of potatoes on the right. Much to my delight, we mostly native foods the entire trip. So delicious all the time!

Day 3 found us crossing the border to Guatemala to visit the ruins at Tikal.  We forged even deeper into the jungle this time and even saw some "panther crossing" signs along the road. 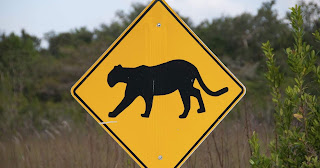 I guess they're only active at night, but we did see some spider monkeys and plenty of Guatemalan raccoons.
Our tour guide, who was later referred to as the Big Chief of tour guides in the area, was a walking encyclopedia of Mayan history. One of the first structures he pointed out was the remains of a sauna. Laura loves a good sauna, so I thought it only appropriate for her to stand in for this picture. 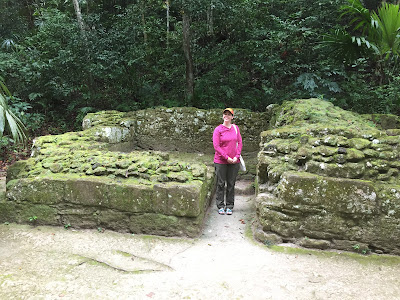 Temples. There were five in all that had been unearthed or at least partially recovered. If memory serves, our guide said the Mayans lived in this area from 300 BC to 800 AD. 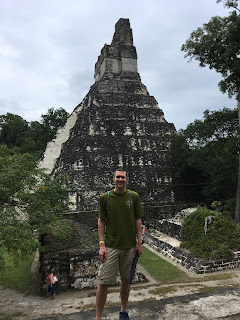 Here's the view from atop one of the temples. Breathtaking. 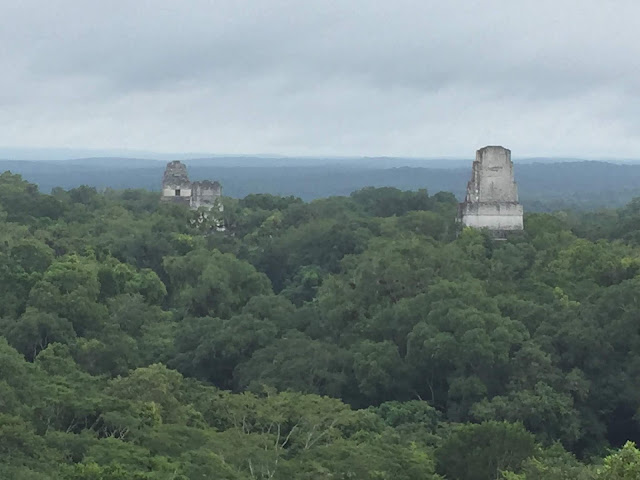 Day 4 was our last day inland and we took another guided tour on the Upper Mikal River. To our pleasant surprise Wayne was our driver again. He introduced us to Dennis, a young man who grew up in the area and would pilot our pontoon boat. 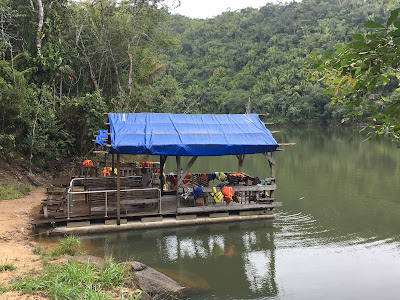 We spotted a number of iguanas, plenty of fish, howler monkeys hanging out in the tree tops, a solitary eagle and two crocodiles on our trip up and down the river.

We stopped at two waterfalls and a couple of the other individuals even climbed up one a ways and jumped in. I wasn't interested in getting wet again, but did have some fun navigating the rocks in the river to the falls. 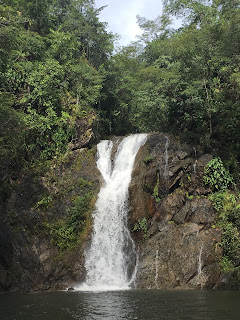 I think this was my favorite part of the trip, because everything was so natural and untouched by man. We ran into another smaller pontoon and even picked up an American hitchhiker at one point, but otherwise had the entire river to ourselves. No litter or pollution of any kind. 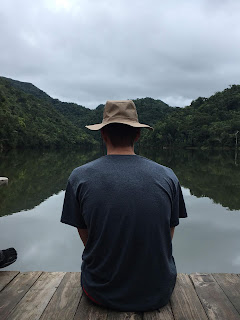 I sat at the front of the boat a good portion of the time with my feet playing in the water.  So peaceful.

Day 5 was a travel day as we headed back to Belize City to catch a ride on a puddle jumper to San Pedro Island. 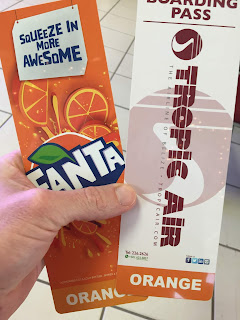 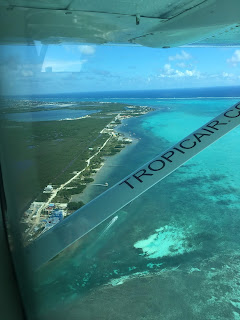 Reusable plastic boarding passes, no security to pass through and a twelve minute flight made this easily my most pleasurable flying experience of all-time.

San Pedro Island is weird. I guess there weren't paved roads and cars on the island until the last twenty years. Now it's over run with gas-powered golf carts as the main means of transportation and it is super touristy. 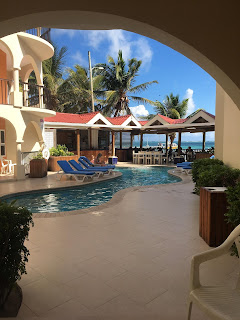 Our hotel was top notch. Above is a snapshot from our door... pool, bar/restaurant and the Caribbean Ocean just beyond that.

We explored the island by foot a bit and I had my taste of "The Beer of Belize." 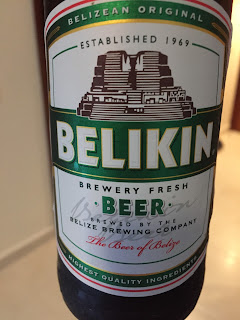 Meh. Belikin Stout was more to my liking, but neither were really up my alley.

Day 6 included manatee watching snorkeling, lunch on a small island and a quick trip to another island by the name of Caye Caulker.

Snorkeling was pretty neat, but I really enjoyed seeing the manatees up close. Unfortunately we weren't able to get a good picture of them. 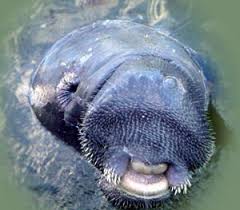 Above is the closest thing on the internet I could find to the photo opportunity we had of what my wife and I like to call a "floaty potato."

Here's the small island we had lunch at, which is known as Goff's Caye. 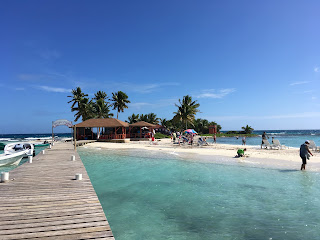 We did our snorkeling with a couple of the guides (DaRell & Carlos) while the third (Eron) grilled out for us. Oh, by the way, that is the entire island. I still like thinking about eating lunch, with my wife, on a remote island, the size of a softball field, in the Caribbean. Really cool.

On Day 7 we took another tour. This one promised more snorkeling out by the second largest barrier reef in the world, a stop through what is known to the locals as Shark & Ray Alley, and a longer stay on Caye Caulker. 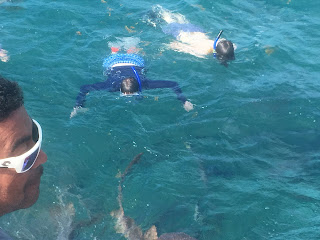 We saw most of the cast from Finding Nemo at the reef, although we didn't have the tech for pictures. Later, Laura went in to swim with the sharks and I took some pictures.

During our second and longer visit to Caye Caulker we enjoyed what was probably my favorite meal. 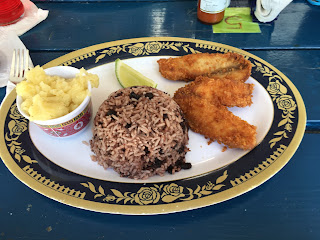 Potatoes, rice & beans, and fried fish with a slice of lime. Deliciously fresh!

Day 8 saw our departure. Taking off from the San Pedro Islan airport was an unbelievable experience. It's a smaller airport and only services other islands or passage back to Belize City. We were able to check in and then I was allowed to leave the airport, walk down a block and pick up a breakfast burrito for Laura. Crazy. That would never fly in the US.

Overall, it was a wonderful trip.

I was nervous going into this vacation, but only because I've been reading the news more and there are things out there that make you think twice about going to Central America. I also tend to worry about silly things like the language barrier and what not.

Belize is beautiful and welcoming. English is the official language of the country and most individuals are bilingual (Spanish) and some speak three languages (Creole). While inland our drivers, tour guides, and the staff at the lodge (Elmer & Josie in particular) were just tremendous. You weren't treated like "just another tourist passing through" but they really seemed concerned about making sure we had a great experience.

San Pedro Island wasn't necessarily for me. We had never really done the sun/beach thing as a couple and it was a fun experience, but it's not something I think either of us need to repeat soon. I didn't care for the touristy nature of the island, but the snorkeling, manatees and food made it worth the trip. Plus, the company was unparalleled.

If you're ever considering getting away and looking for a warm spot to land don't hesitate when considering Belize. I would highly recommend it!
Posted by P-town Tom at 1/02/2019 09:05:00 AM