Sorry about the delay getting to the 2015 box of Panini USA Baseball. I cracked open the 2013 and the 2014 boxes last month and thought I did pretty well as far as the return on my investment. Today I'll show the final box set in this mini-series, which thanks to a Black Friday sale set me back all of $14.95.

The box is nearly identical to the other two years I purchased. A nice brick of cards was waiting for me in the center with plenty of extra space to the left and the right. 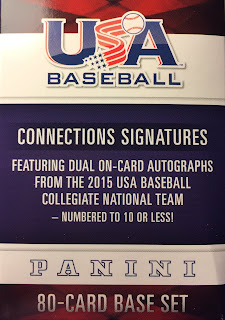 It's an 80-card base set with chances for low numbered autographs of players you may or may not have heard of. For $15 I'll take that gamble!

Here's your first look at the base cards for 2015. For the first time Panini uses the card design to help differentiate between the 15U, 18U and Collegiate players. 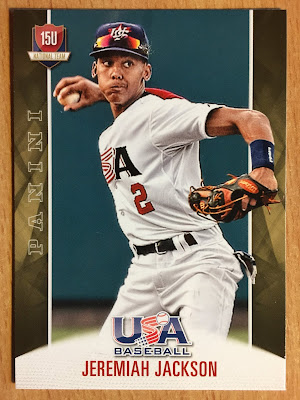 Jeremiah Jackson was a second round draft pick by the Angels this past summer. He debuted in Rookie Ball and had varying degrees of success.

The 18U players receive a red border. 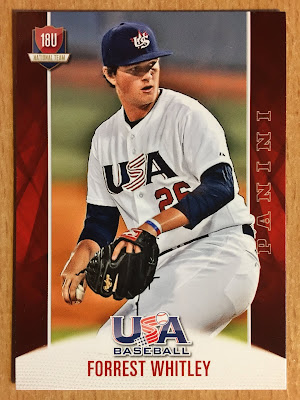 Forrest Whitley, for my money, is one the top starting pitching prospects in all of baseball. He throws some serious heat, but he also has never topped 100 innings pitched in a season yet. My gut says he'll see time with the Astros at some point in 2019 and it'll be interesting to see how he's used.

The Collegiate players get the blue border treatment. 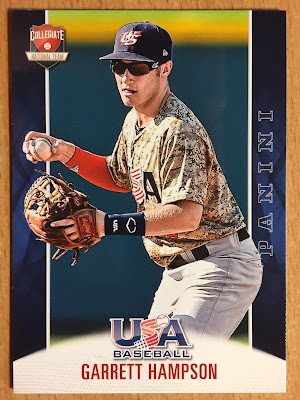 Garrett Hampson got a cup of coffee for the Rockies in 2018 and did fairly well. He's a middle infielder who has a chance to play everyday with the departure of DJ LeMahieu.

Game Action is an insert set and highlights some of the bigger names to play for USA Baseball. 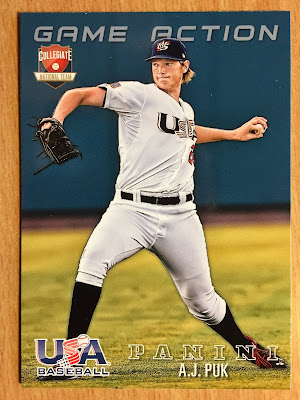 It's a simple design, but one that I can get behind. I chose to show A.J. Puk, who owns a minor league average of 12.8 K/9, but missed all of 2018 with Tommy John surgery. I don't know if Puk will be ready to go for spring training this year, but the A's rotation isn't exactly a hotbed of talent.

This box set also included the three team cards and a card of the USA Baseball's training complex in North Carolina. 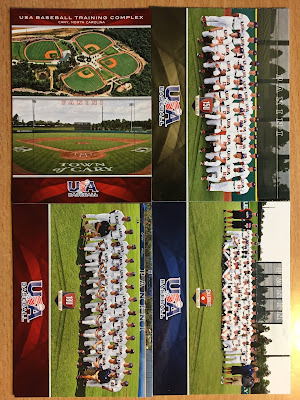 Besides the Game Action Inserts the box set offers you three of the Crown Royale die-cuts.

The Morgan McCullough card was numbered 19/25, which is a nice deal. 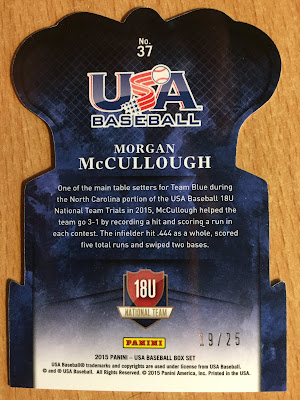 On to the hits! 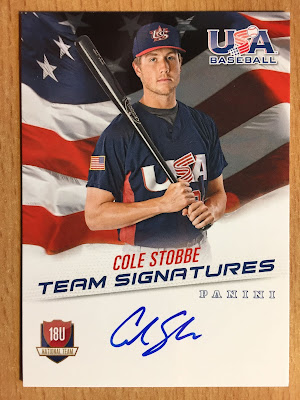 Cole Stobbe was drafted by the Phillies in the 3rd round of the 2016 draft. In his third year in minors he has never played about Single-A. His career OPS is 0.684. Moving on. 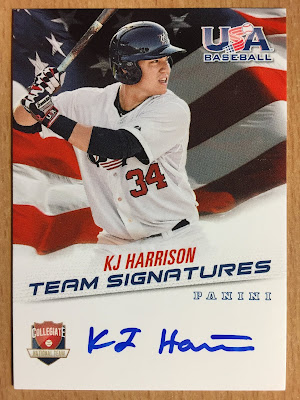 KJ Harrison, a 3rd round draft pick of the Brewers in 2017, put up some very solid numbers during his Rookie League debut. Last year he played in the Midwest League (Low-A) and struggled a bit at the plate, but he's an interesting 1B/C prospect with plus-power. 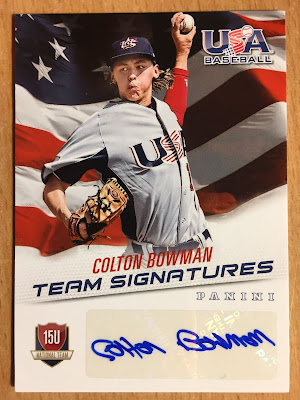 Colton Bowman sounds like a name made for prospect hunting. Currently he's a high school senior in Texas with a commitment to Oklahoma State University. 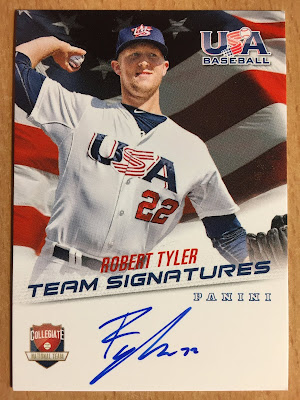 Robert Tyler was a 1st round pick of the Rockies in 2016. Currently he has hasn't pitched about Single-A yet, but he's another hard throwing arm who has gaudy strikeout numbers.

Let's take a break from the autos and switch gears to the relics. 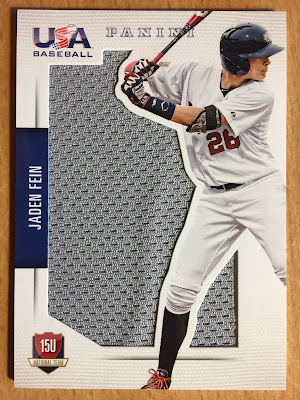 Jaden Fein is a freshman this year at San Diego St. University. 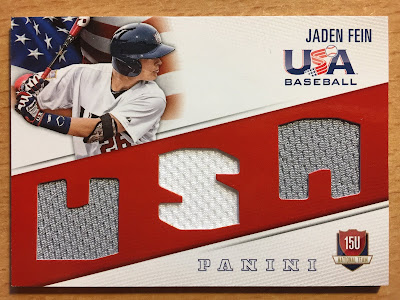 Well, how 'bout that. It's a Jaden Fein hot box!

Here's something a little bit more on the high-end side of things with a relic and an autograph on acetate. 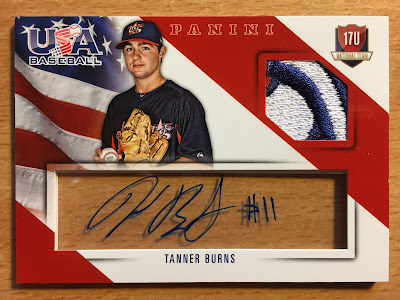 Tanner Burns was an All-American Freshman last year as a pitcher for Auburn University. 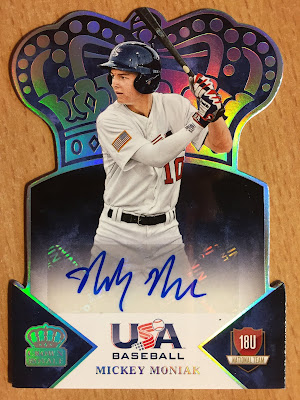 Mickey Moniak was the overall #1 pick by the Phillies in the 2016 draft. Not a bad pull! This one is numbered to 99.

And, hey! The box claims there will be 8 hits included, but I happened to pull a 9th! Glorious! 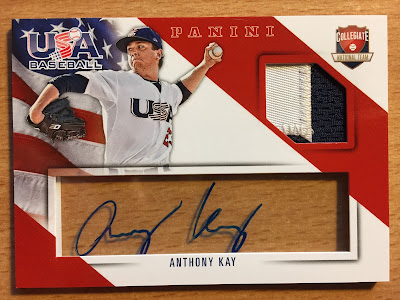 I really do like these acetate auto-relic combos. Anthony Kay was a first round selection by the Mets in the 2016 draft. He started twenty-three games last year in his first taste of professional baseball.

And with that extra hit brings the close of my Black Friday purchases of Panini's USA Baseball. It was a fun break and I enjoyed looking up the players to see where they are in baseball. I'll bee keeping tabs on them down the road.