In particular, I feel blessed to have had the opportunity to grow closer to my paternal grandfather the last decade or so. He moved in with my parents and then into a senior living facility a couple of years ago.

I found we shared many common values and also a love for Cubs baseball and hamburgers.

Sometimes he would argue with me about whose turn it was to pay for our burgers and fries when I would take him out. I don't think he liked the idea of his grandson picking up the check, but eventually he came to realize that I have the same stubborn Swedish blood running through my veins.

Occasionally he would talk to me about his high school days and the guys he would pal around with, his short time in the military, or stories of when my father was younger. Mostly though, I think he preferred to focus on the present and future and leave the memories in the past. I took them when he offered them up and didn't press for more.

When I would drop by he loved to say, "Dunlap is in the paper again." When you're employed at the top ranked academic high school in the area you tend to make the news. He enjoyed hearing about the sports teams I worked with, especially varsity baseball and football. There were even a few times he broke the latest news to me, before I heard about it through the proper channels at school. He always perked up when he discovered I hadn't made it into the loop quite yet. Grandpa enjoyed finding out what was new at school, what my wife and I were up to, and about our future travel plans. 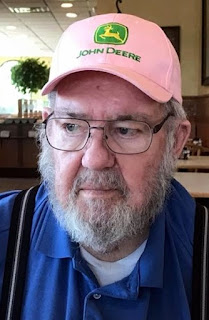 What I enjoyed most were the impromptu visits I would make to his apartment the last couple years. Sometimes I would visit after a baseball game I had finished coaching, still in uniform, to sit down and eat dinner with him. I usually change out of my uniform as soon as possible, but I think it gave my grandfather something to talk about with other residents. Other times, during a summer day I would pick up a piece of sugar free pie for a surprise visit. He loved his sugar free pie. Occasionally it would go straight into the refrigerator for later, but I didn't mind. I'm fairly sure he appreciated the visit from his grandson more than the pie anyways.

I wasn't able to get to know my other grandparents as closely. I realize now I truly missed out. My grandfather used to tell me, "The days are long, but the years sure do go by fast." He's right. They do go by pretty fast.

Slow things down and spend time with your family.

Email ThisBlogThis!Share to TwitterShare to FacebookShare to Pinterest
Labels: family