Julie, the wonderfully generous and talented author from A Cracked Bat, sent me a package which really took me back a few decades.

Here's a photo of six former Peoria Chiefs. Joe Girardi started his professional career in Peoria way back in 1986. Earl Cunningham was the #1 draft pick in 1989, spent parts of four seasons in Peoria, and his claim to fame was once being the franchise leader in career strikeouts. Ugh. 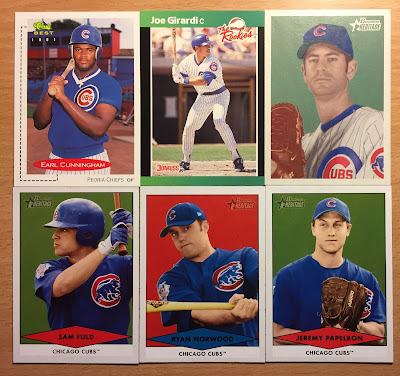 The other four guys all played for the Chiefs this century, although Mark Prior's visit was a rehab stint. Some may recognize Jeremy Papelbon as Jonathan's younger brother. Sam Fuld is the only one of the bottom three who carved out any semblance of a career in MLB.

Lot's of talent and personalities within the next group of six. 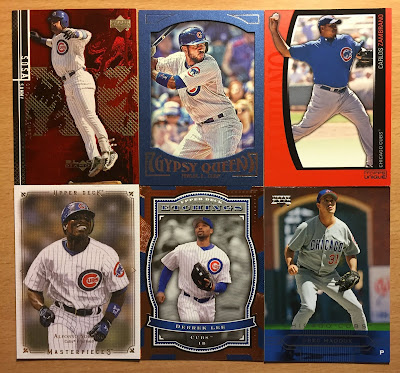 Soriano grew on me toward the end of his tenure with the Cubs, but my favorites are Derrek Lee and Dexter Fowler. The latter takes the cake because he helped bring a championship to Chicago.

Guys who had HIGH ceilings but just couldn't meet expectations: 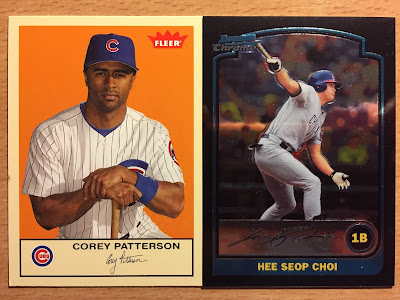 Corey Patterson was supposed to be the goods and in the midst of his breakout season tore an ACL in his way to first base. He never reached those heights again.  Hee Seop Choi was flipped for Derrek Lee and then shortly thereafter fell off MLB's radar. Man, Cubs prospects were kind of depressing until Theo came to town. 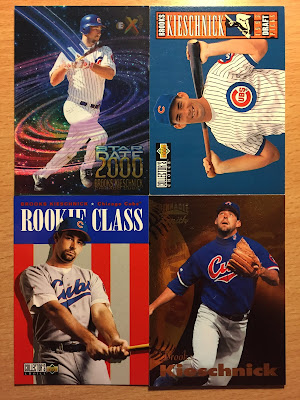 The "Star Date 2000" card from 1997 makes me laugh. I don't know if it's because it reminds me of Star Trek or what. Regardless, it's the 84th different Kieschnick card in my collection. Very nice.

The Bowman Heritage card of Kerry Wood is the 542nd addition to my Kid K player collection. 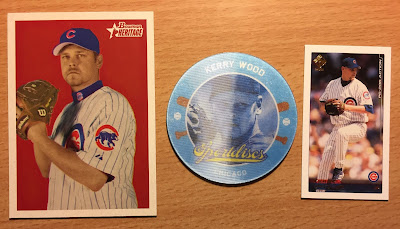 Julie sure does know how to construct a trade package!

Both of these Billy Williams cards are new additions as well. 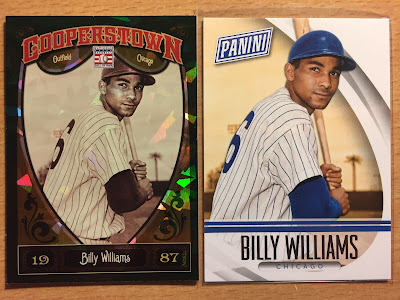 Re-using a photo?  Ugh...  I do like the palm tree in the background though!

Someday I will complete one of those Triumvirate puzzles. That'll be a good day.  Actually, maybe this is the one I'm missing? 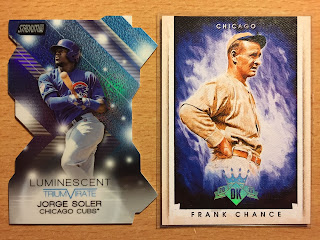 The Frank Chance Diamond King card must be a parallel, as it is numbered out of /99.

Julie tossed in plenty of current Cubs, too. 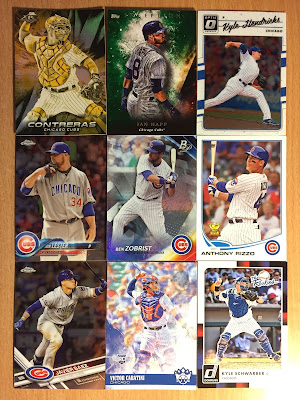 The Gold Mint Contreras and the Bowman Platinum are my favorites from this lot!

I was a pitcher in college, but I still enjoy a good longball as much as the next guy 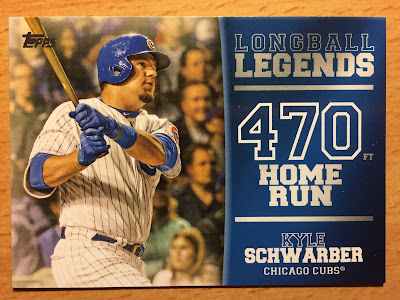 I was, however, quite bummed that the homer featured on this card is NOT the one that landed on top of the Wrigley Field jumbotron in right field during the 2015 playoffs against the Cardinals.
That home run put Schwarber on the map and would be the one my mind goes when using the word "legend." 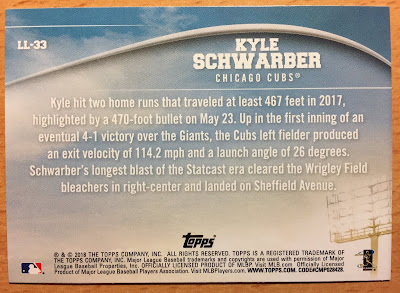 Changing gears and going back to 1988 . . . that's when I discovered baseball cards and started collecting. The next summer the Cubs had a formidable lineup of Grace, Sandberg, Dawson, Dunston and two promising rookies in Jerome Walton and Dwight Smith. 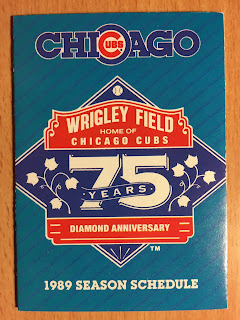 It was the first time I saw my favorite team clinch a division and I can still see Mitch Williams getting that last Expo on a check-swing strike three. Good times! Oddly enough, I don't have a pocket schedule from the '89 season, but I do now!  Thanks, Julie! 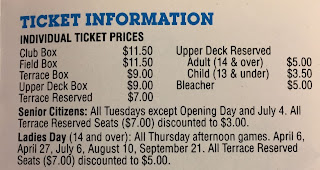 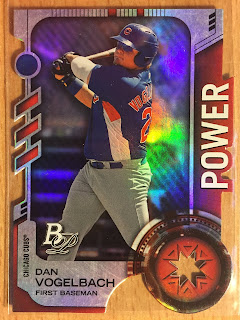 I have one of these die-cuts already, but I absolutely love everything about this card!  It's shiny, let's everyone know how POWERful Vogelbach is, shows him in a Cubs jersey, and it's already in a penny sleeve. Yep, you read that last bit correctly. It's darn near impossible to get one of these in a sleeve without catching one of the many jagged edges.