If you haven't had a chance to read yesterday's post please give it a quick peak. The Zippy Zappy pack defeated a pack of A&G by the score of 6 to 1.
Today, we conclude the Pack Wars with another Zippy Zappy Pack (left) versus a pack of 2017 Panini Diamond Kings. 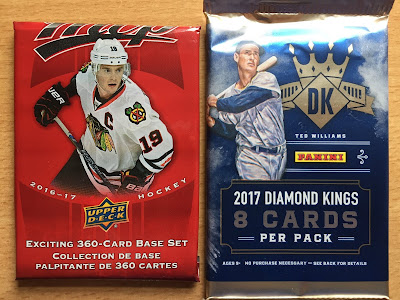 This one will go a full eight rounds. Buckle in! 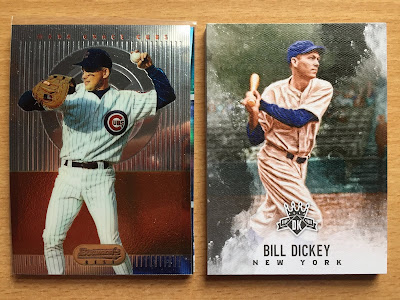 Shiny! The Mark Grace card is from the 1995 Bowman's Best set, and this is the first card in my collection from this set. Very nice.
Bill Dickey is a Hall of Famer, a Yankee, and catcher who batted 0.313 during his career. But, if you ask most people, Dickey wouldn't make their Top 10 list of most notable Yankees. After all, his nickname was The Man Nobody Knows.
Gracie gets the ZZ Pack on the board with his chrome like card. 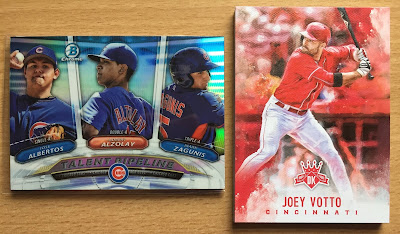 Joey Votto is a charismatic Canadian, but I'm a Cub fan and a prospect follower at heart. I'll take the trio of Albertos, Alzolay and Zagunis for the win! 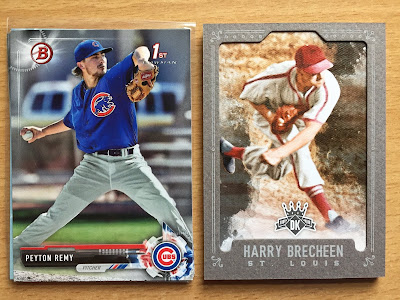 Peyton Remy was drafted in the 17th round of 2017 draft and pitched fairly well in the Arizona Rookie League this summer. He's also 22 and a little old for the rookie league.
Harry Brecheen is a Cardinal I've never heard of, but supposedly he helped pitch St. Louis to a couple of championships. The card is also one of the framed parallels. Yeah.  Another parallel.
I'll take a Cub prospect over an old Cardinal I've never heard of any day and twice on Sunday. 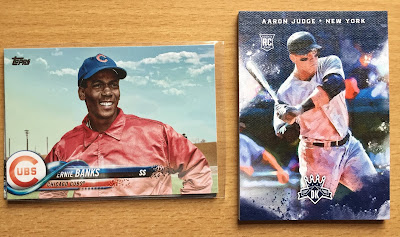 This match up. My word.
The ZZ Pack pops out a 2018 Topps Series 2 photo variation of Ernie Banks. What a stellar looking card!
The Diamond King pack throws an Aaron Judge (All Rise!) rookie card at us. Wow!
I'm pretty torn here. I love the Banks card, but it's not every day I run across a Judge card. In fact, this will be only the second one in my collection.
I think I'll side with the Ernie, because I'm a homer.  Besides, the Judge will probably wind up in someone else's collection before too long anyways.
Updated Score:
ZZ Pack = 4
'17 DK = 0 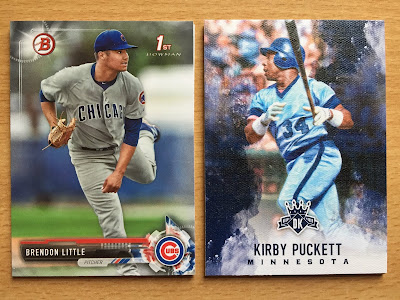 Brendon Little was a first round pick in the 2017 draft for the Cubs. He had an ERA of 5.15 at Low-A South Bend this year. FYI, the Midwest League is more of a pitcher's league.
Kirby Puckett played Bradley University here in P-town and I've always been a fan.
Diamond Kings get on the board with a sneaky win! 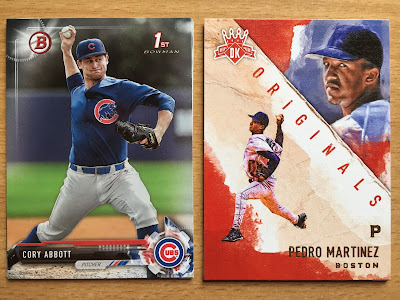 Cory Abbott, a second round pick in 2017, split time between Low-A and High-A this past summer and posted a 3.13 combined ERA. There's some promise there.
Pedro Martinez is one of my favorite pitchers of all time. He carried my fantasy pitching staffs for a number of years.
Vote for Pedro! 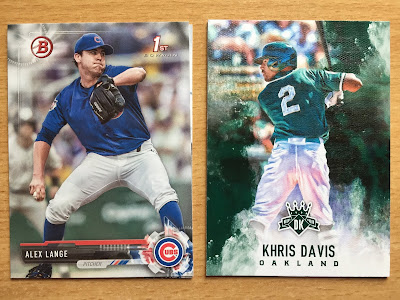 Alex Lange, another first round pick in 2017, pitched his way to a 3.74 ERA at High-A this year.
Khris Davis batted 0.247 for the fourth year in a row AND paced the AL with 48 homers.
I don't really have any allegiance to Khris Davis, but I do respect his consistency. With that being said I'll take the promising Cubs arm for the win here. 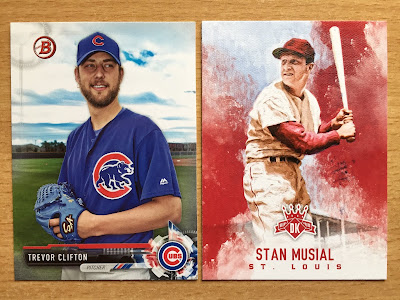 Trevor Clifton, a 12th round pick in 2013, has advanced all the way up the ladder to Triple-A. He's probably back of the rotation filler at the MLB level and may get a look sometime this upcoming summer if there's doubleheader or unsuspected injury.
Stan "The Man" Musial. Did you know Musial hit 0.330 when he was 41 years old? I'm almost 41 and I can't imagine how he must have done that. My athleticism has been diminishing the last half-dozen years or so. Much respect, Mr. Musial.
"The Man" for the win here.

We had a much closer bout this time around, but the result was the same in the end.
Zippy Zappy moves his overall pack record to 20-0-2. That's right.  Twenty wins, zero losses and two ties. The man knows this Cub fan.