Ever Get a Bonus Auto from a Seller?

Have you heard the rumors about Seattle blowing it all up? Supposedly they don't think the team has enough to compete with the Astros and the resurgent Athletics in the AL West for the next couple of years. So, they were going to set their sites on reloading for a few years down the road. This is a team that 89 wins last year! Crazy.  Last I heard Seattle's general manager was trying to beat back those rumors. 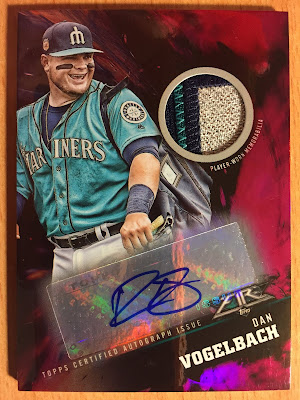 The M's already traded for Mallex Smith in a five player deal and now James Paxton trade rumors are fueling the hot stove. Could this mean Nelson Cruz won't re-sign and Vogelbach would be given a shot at DH-ing?  That would be 🔥! 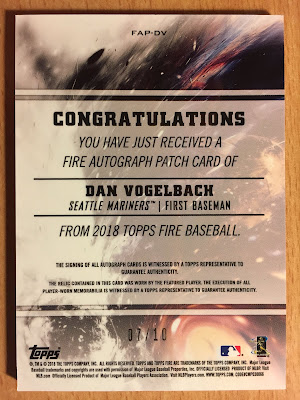 Speaking of fire...  How about my new pick-up?  A 2018 Topps Fire Auto-Patch! Vogelbach wasn't included in the base set, but he snagged a spot on the auto checklist. I'm not sure how that works, but it's a sharp looking card and one I'm pleased to add to my Vogelmonster player collection.

The above card arrived in a padded yellow envelope from the eBay seller, but not in a top loader. It was placed within a penny sleeve and tucked inside a team bag with a bonus card. 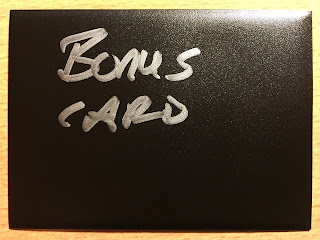 Honestly, I would have preferred the top loader over the bonus card, especially if the card arrived dinged . . . which thankfully it didn't. 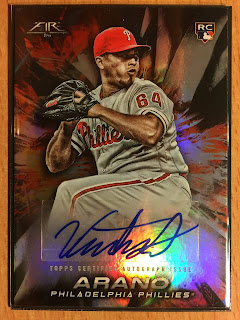 I've received bonus cards before, but typically they have served as extra "padding" for the purchased card. There are 67 players in all which comprise the regular autograph portion of the Topps Fire checklist. Scanning it over I discovered there were three players who I was not familiar with: Miguel Gomez, Tomas Nido and Victor Arano. Arano is young and controllable bullpen arm for the Phillies and he had a nice 2018. I guess there are worse bonus cards to be had!

If there's a Phillies fan out there interested in the Arano auto, please drop me a line!