Daniel, author of It's like having my own Card Shop, blogged this morning about what he would focus on if he was forced to cut back on his collection. I liked the idea of the exercise and thought I would give it a go and pick only five items from my collecting world to continue pursuing ... you know, if I was forced to cut back.

1. Dan "The Vogelmonster" Vogelbach player collection.
Yeah, you knew this one was coming. The man, the myth, the monster has an 1.012 in Triple-A right now. Release the beast! 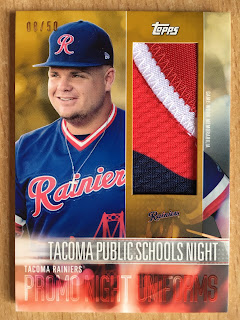 Fun Vogelbach Tidbit of the Month: Vogelbach was suggested as a possibility when the writers of Cut4 proposed the idea of a baseball player stealing the Declaration of Independence.  (h/t to my sister for the heads up!)

2. Cubs Collection
I used to be a set builder, but I believe I would have to classify myself as a team collector these days. I don't actively seek out Cubs cards, but when some Cubs-mojo catches my eye I don't hesitate pulling the trigger. 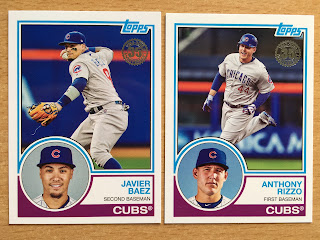 Above are a couple of the 1983 Topps inserts from this year's product. Gosh, they look sharp! 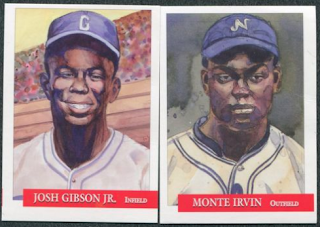 I'm really struggling to find cardboard of most of the Negro League players who have been voted in. I have cards of Gibson and Irvin, because they have been given some love through major releases in the past ten years, but cards of guys like Turkey Stearnes and Bullet Rogan are challenging. FWIW, the cards pictured above are part of an eighteen card Negro League set given away at a minor league park in 1992. If I could find the checklist I'd probably pounce on this one! Maybe I'll contact the seller.

4. Ryne Sandberg player collection
I started my Ryno collection when I was in middle school. I haven't focused on it as much as I would have liked since I came back to the hobby, but that is slowly starting to change. My goal is to crack the 1,000 card mark before too long. 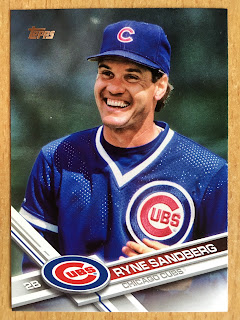 I picked up this SP variation the other day and couldn't be happier. Great candid photo of Ryne!

5. 2016 Cubs World Series Binder
I don't have a checklist for the binder, but if a piece of cardboard mentions the Cubs winning the World Series in 2016, then it goes in the binder. 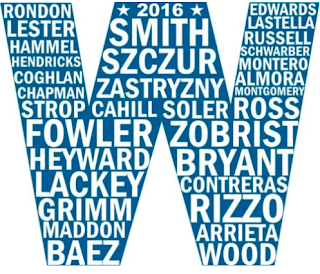 Things have obviously slowed now that we're in 2018, but there were three cards in Topps' Series 1 Kris Bryant insert set that specifically referenced the World Series. So, cards are still being produced!

So, there's my five. Major collections that would be put on the back burner would be the sets I'm working on and all the player collections I have including Kerry Wood, Brooks Kieschnick, Kosuke Fukudome and Karl Olson. Not adding random cards of local products like Ben Zobrist and Jim Thome would also be tough to stop cold turkey.

My blogging pace may be matching the rate at which I purchase cardboard as of late, but I've been fortunate to maintain the resources, time and money, to keep up with my collecting habits at my own slow pace. As a wise blogger once told me: "It's your hobby. Do it your way."

Thank you. I will do it my way ... and I'll keep collecting everything above.