November was the last time I bought any current product. When I wanted to bust some wax during my hiatus I just waited for a blogger to post their latest rip. That usually scratched the itch. Bloggers are so good about sharing their latest purchases . . . and it has saved me a pretty penny! LOL

Ohtani-mania drove the prices up at the LCS and I could never make it to the big box store before someone cleaned them out of the latest and greatest product. So, the pack ripping drought continued well into summer. In short, nothing has really caught my eye on the 2018 card scene.

I like building sets and told myself that I'd build 2019 Topps Bunt from packs and trades, but then I learned Topps decided replace it with something called Big League.

Let me be very up front here: I'm not a prospector or hit seeker. I don't care for price gouging and I'm not in it to flip a card for a pretty penny. I'm a Cub collector and I also love building a well done set.

You can go rounds with the Twitterverse about what constitutes a "well done" set. For me, it's pretty simple: decent checklist, not too many gimmicks, fair price point, good photography and something fun to chase.

While keeping those things in mind I'm going to show of a portion of a hobby box I purchased at my local card shop. 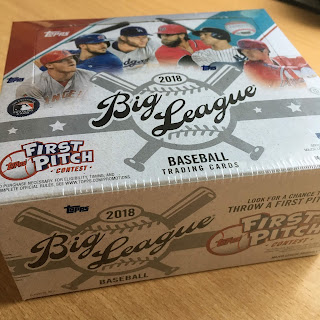 I picked this one up for $45 (not including tax), which seems to be the going price on Ebay right now. There are ten cards per pack and twenty-four packs in a hobby box, which breaks down to about $2 a pack.

I think we can all agree we miss the days of fifteen cards for half a dollar, but in today's economy ten cards for two bucks can only be beat by Opening Day. Personally, I'm not a big advocate for Topps' flagship product, which comes at a similar price, because I'm too much of a completest. If I were to set build set Series 1, then I would have to build Series 2 and Update. That gets to be a little expensive for my blood. Big League has a four hundred card checklist, which is quite manageable.

Before I get to the pack busting you have to check this out.

There are four different wrapper designs in the box and if you line them they have that Stadium Club Triumvirate feel. (Quadumvirate?) I also like how Bellinger and Altuve didn't make the box cover, but they found their way to the packs. Interesting that Bellinger and Judge, the two players everyone was chasing in 2017, share a pack wrapper. Two Las Vegas boys are on one and two guys who play for Los Angeles based teams are on another pack. I can't find an obvious link between Altuve and Trout, you know, except for that they're both phenomenal at baseball. 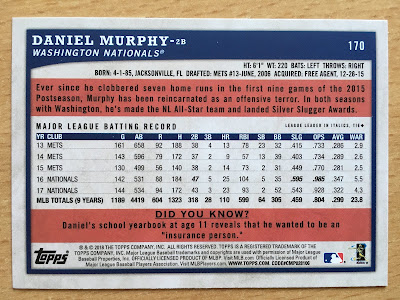 I typically open my packs along the seam on the reverse side and the back of Daniel Murphy's card was staring at me. "Insurance person."  Ha! 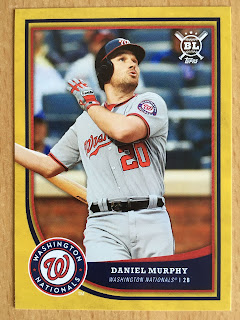 I flipped over the card and found a gold parallel. From what I can tell the last card in each pack is a parallel (mine were all gold). I'm glad this set has frames and it made me smile to see the players are not bounded by the frames, like Murphy's arm above. 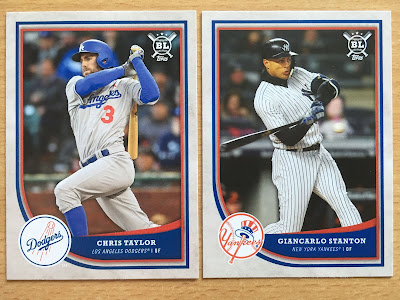 There is no foil on the card, just in case you were wondering about the logo in the upper-right hand corner. 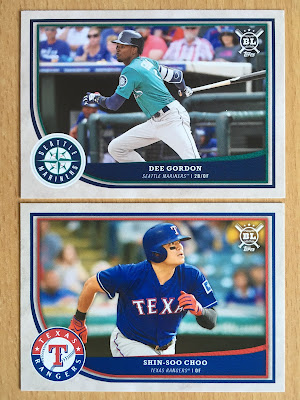 Horizontal cards make an appearance, which I'm okay with.  Both photos fill the space admirably. 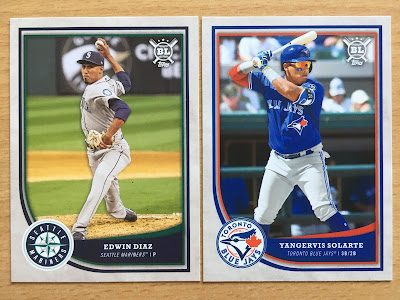 Maybe you haven't noticed, but the design colors are based upon the team colors. That's a big plus in my book. 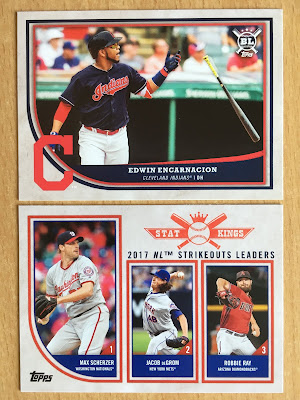 There are thirty cards in the set labeled as "Stat Kings Trio" and they're your typical league leader cards. 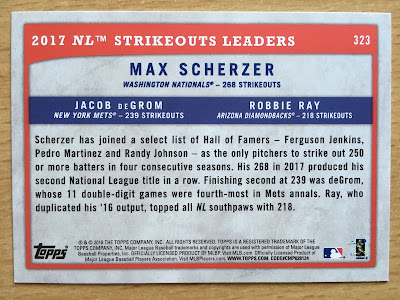 I was hoping for a list of the top ten players in the category on the back, but the write-ups are pretty solid. 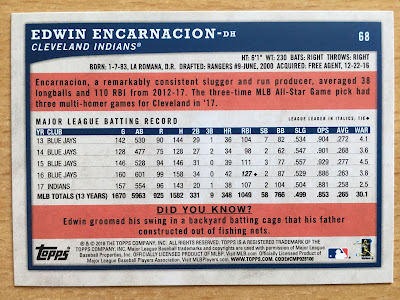 While we're talking about the backs here's one of my favorites from the first pack. I understand this set is Topps' idea of a kids' set, but I love the "Did you know" concept. The facts are all over the place and I think they bring you a little bit closer to the game. Love 'em! 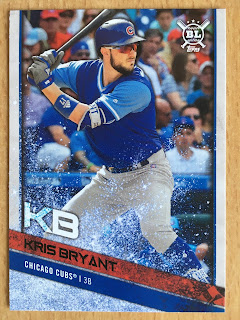 Ahhh, a variation. These are the Players Weekend Variations which could be an insert set all by themselves, because there are twenty-five of them in total, but they use the base set's numbering system. 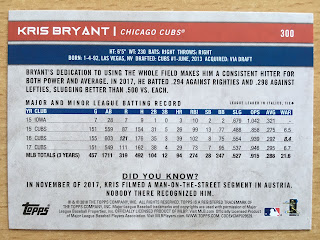 The fronts are obviously quite different, and although the backs have a different design to them I think they have the same information on them.

That was pack one. Nice Krist Bryant hit there for myself. 😀

I'm not going to go full show-and-tell on you with the last three packs. How about I just show you the highlights? 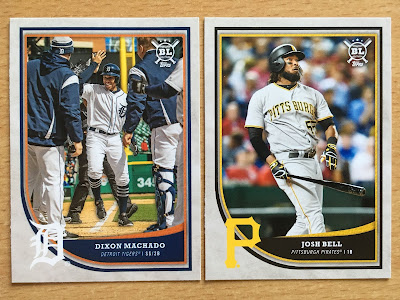 The photography is not Stadium Club and we don't have the high gloss feel that accompanies such a product, but Big League does sport some nice photo selection. Was Josh Bell's blast fair or foul?

If I weren't a Cub fan my NL team would be the Brewers. 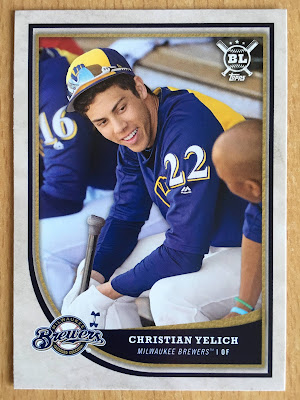 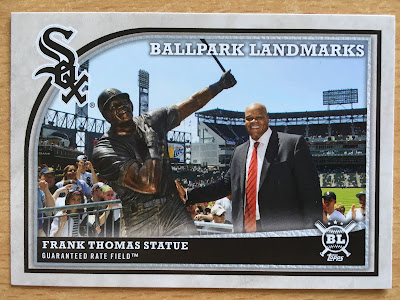 There are fifteen Ballpark Landmarks cards on the checklist. 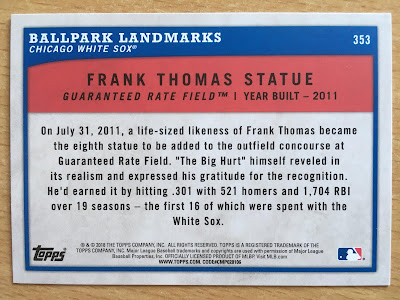 As a guy trying to make it to all thirty MLB parks I really like this subset.

FYI, there are twenty cards of "All-Time Greats," but I didn't pull any in my first four packs.

Bringer of Rain!  If I get a dupe of this one it's going straight in a PWE postmarked for Hazel Green, Alabama. Unfortunately for Wes, I need it for my set build! 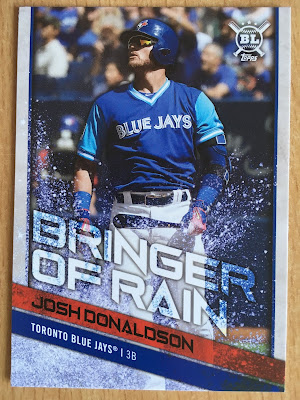 Again, the backs are pretty solid. They don't have full career stats, but there's plenty else to be happy about. 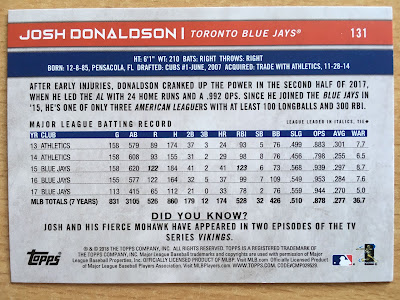 Here's some more "Did you know?" backs for you. 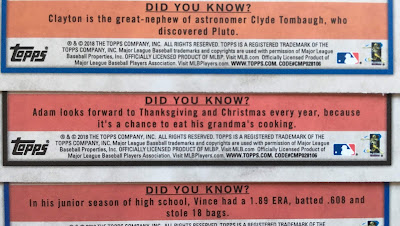 Above we have Clayton Kershaw, Adam Duvall and Vince Velasquez. 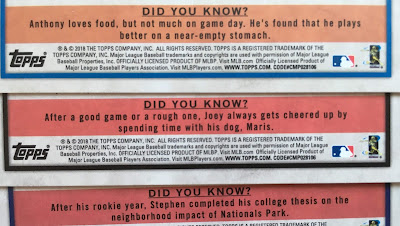 Man, I love me some oddball baseball trivia!

Looks like the beginning of double play at home and a gold Strasburg. 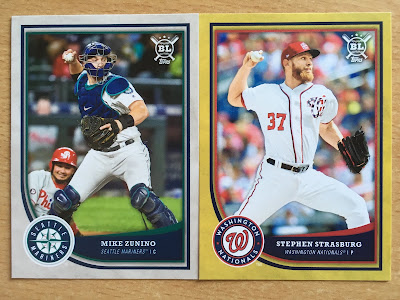 Here's another example of some stellar photo selection. 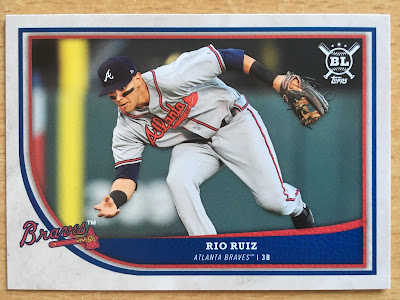 Just a couple more inches and Rio Ruiz might get that Braves logo! 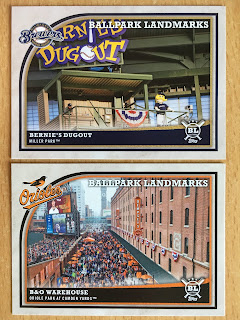 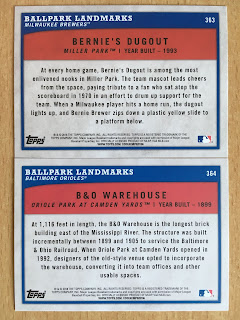 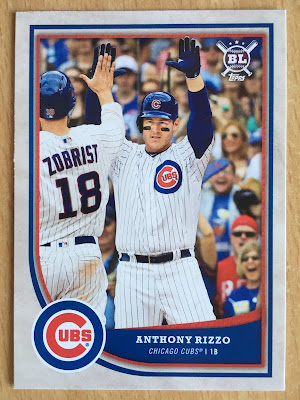 Rizzo and Zobrist seem to like Topps' Big League effort and I would tend to side with them!

Earlier, I outlined five points that make for a well done set in my eyes. Let's see how Big League rates:

1. decent checklist - 400 cards total, with 335 being regular player cards and the remaining 65 dedicated to Ball Landmarks, Stat King Trios, and All-Time Greats . . . No crazy SPs in the base set and not so large of a checklist that it's overwhelming. Grade: A

2. not too many gimmicks - their are Players Weekend variations for 25 players and there are 8 SSP "error" cards which come at one to a case. There are also gold, blue, and black & white parallels. Not bad overall, but I could do without the parallels... maybe just limit it to one instead of three? At least it's not Bowman crazy.  Grade: B

3. fair price point - $2 a pack isn't a bad deal for a product that does have some occasional autos in it. Grade: A

4. good photography - I'm pretty content with the photography. There's a fair amount of photos that aren't your standard pitching/batting photos. Grade: A-

5. something fun to chase - I haven't pulled any yet, but there are inserts in the set. Ministers of Mash is a 10 card set, which fall at two per hobby box. There are 30 Star Caricatures Reproductions cards and I should pull three from my box. I'm really excited about these... must be the kid in me.  Grade: A

There wasn't a 6th bullet point, but I know many of you love the hits.
6. There's no mention of relic cards on the checklist, but there are 57 different autos in all, and they include retired guys like Jeter and Strawberry, current stars like Trout and Altuve, rookies like Albies and Hoskins, and mascots like The Phanatic and Teddy Roosevelt. For the record, this is not Stadium Club where you'll buy four hobby boxes and pull nothing but no-name rookies. Guys like Sean Doolittle, Justin Bour and Kenley Jansen also get autos. Variety! Woo-Hoo!  The down side is the autographs seem to fall about one to every four or five boxes.

It is what it is. And honestly, I think it's a set builder's dream. I'm only four packs into my hobby box, but I'd grade 2018 Topps Big League as an A.

I hope you enjoyed the review. I'll get a want-list up before too long if you're looking to trade.