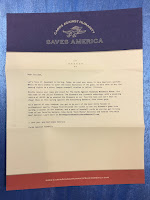 I mentioned earlier about how my wife and I had travel troubles getting to Death Valley for our winter vacation. We were severely delayed leaving Peoria and missed our connecting flight in Dallas by a good four hours. Our friends, Jeff and Nichole, came to rescue by feeding us and putting us up for the night. Before dinner that evening Jeff brought out a gift bag for me for my X-Mas/Bday present. Jeff, a displaced Chicago Cubs season ticket holder always saves some of his Cubs swag for me. I'd be lying if I said my pulse wasn't racing a little bit.

The big ticket item in the bag was a promotional giveaway bobblehead from Wrigley Field. I haven't acquired many bobbles the last few years, but I have a sizable collection in my man room and this one certainly brings something unique to the table. 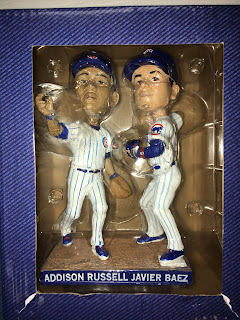 This "Turn Two" bobble is my first one featuring two players, Addison Russell and Javier Baez. It's already been taken out of the box, thoroughly played with, and tucked into one of the display cases in my homemade entertainment system. What a cool surprise!

Alright, and now to the really cool stuff!  I'm not quite sure if I have all the details right, as I was enjoying some adult beverages that evening, but I think Jeff signed Nichole up for the Cards Against Humanity fan club, which I can't find anywhere on their website.

Nichole has been receiving letters from the Card Against Humanity people, like the one below. 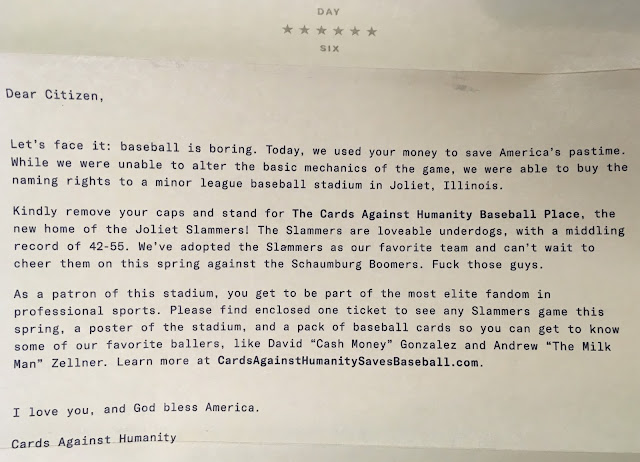 Jeff and Nichole live in the great state of Texas, so I'm the beneficiary of the free ticket the letter mentions and the baseball cards.

Man, these guys are relentless!  "Joliet Slammers vs. Some Crappy Opposing Team"
Look. It's independent league baseball, so none of the teams are world beaters, but you better believe I'm making it to Joliet this summer!

Let's take a gander at that pack of cards, shall we? 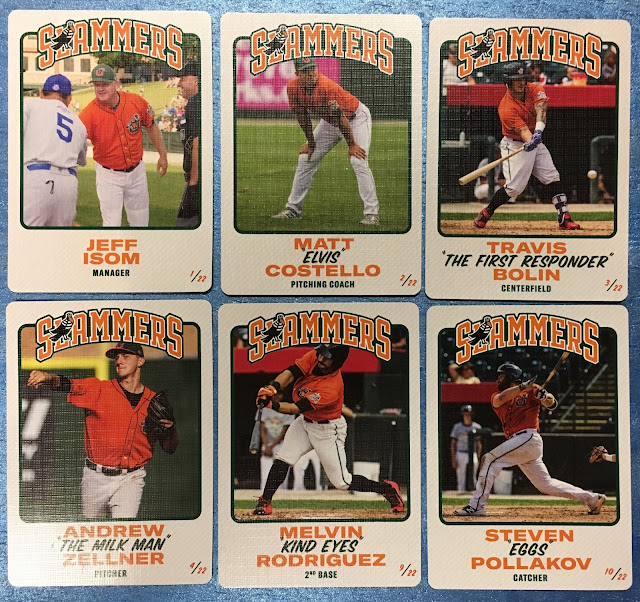 Twelve cards in the pack and twenty-two cards in the team set. I wonder if I can pick the missing ones out of dime boxes at shows in the Chicago suburbs? 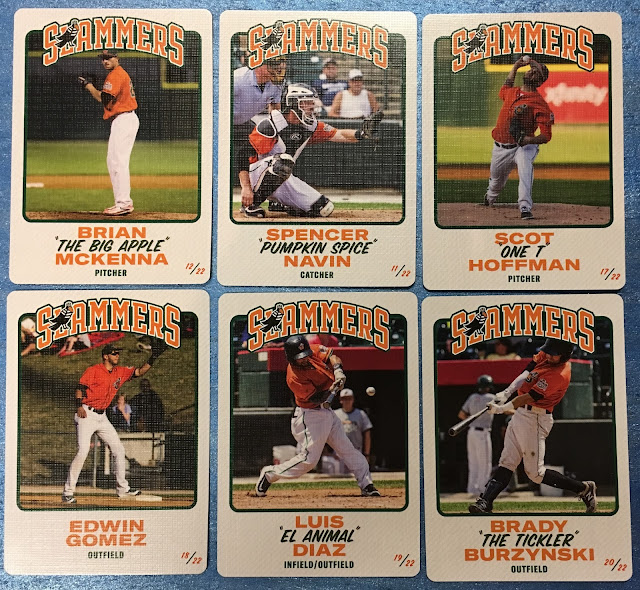 I can understand how the manager got away without having a nickname, but what's the deal with Edwin Gomez?

Let's take a look at the backs: 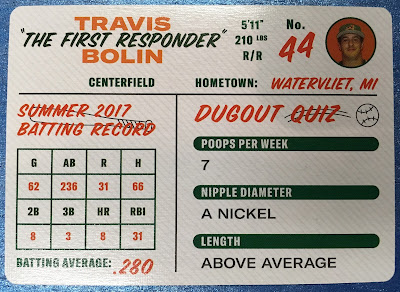 Some of the Dugout Quiz questions are pretty tame, but I chose 'The First Responder' because his questions and answers are little racier. Which, after all, is what Cards Against Humanity is known for.

Included with the letter, ticket voucher and baseball cards was a blue print of the Joliet Slammers' renamed residence, The Cards Against Humanity Baseball Place. 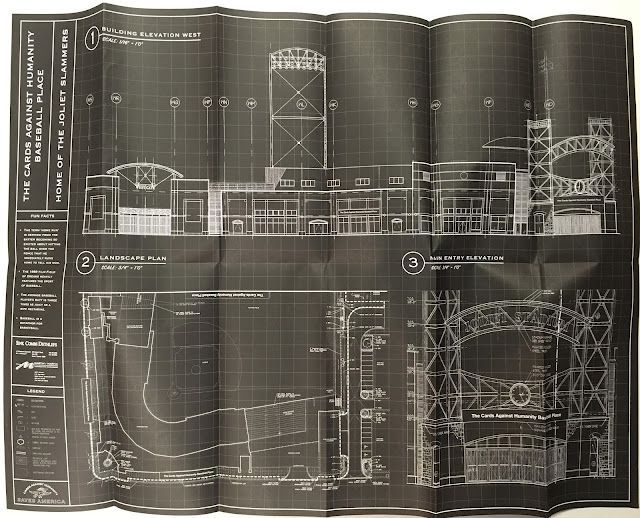 I'm seriously considering framing this up and hanging it on the wall in my classroom. I've read it over a couple of times and there's nothing too suggestive that would get me a meeting with the higher ups.

I had to take a picture of the Fun Facts in the left margin so you could get a laugh like I did. 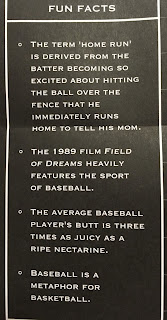 The first three I believe, although I'm not so sure about baseball being a metaphor for basketball. I suppose it depends on which one is your sport.

So, there you go! Cards Against Humanity baseball cards. I'll try and complete the full team set if I ever get the chance. Heck, if the price is right I'll just buy whatever I can and then throw the extras in PWEs. That would be fun for all included.

I hope you enjoyed the post, and if nothing else you found it interesting to learn that Travis 'The First Repsonder' Bolin appears to be quite regular.