Yesterday we saw the second installment of the Zippy Zappying vs. Cartes de Baseball Pack Wars.

Here are your contestants for the conclusion of our three game series: 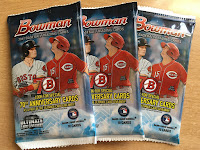 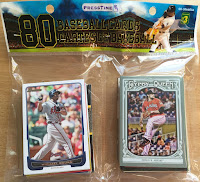 On the left, we have the Zippy Zappy re-packs from Torren' Up Cards, and on the right we the Canadian Cartes de Baseball that I was given as part of the blogger Secret Santa gift exchange from Mike.

Today we'll see the third and final pack of the ZZ re-packs. Zippy Zappy is going for the clean sweep.
This should be good! 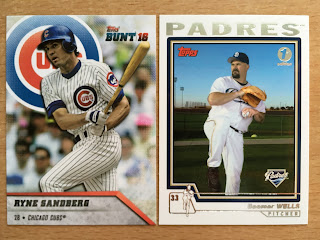 Ryno! Oh, but that's a 1st Edition of Boomer Wells.
Whatever.
Ryno is a PC guy and that gives Zippy Zappy and early lead. 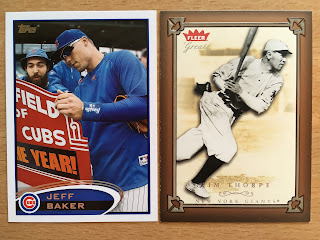 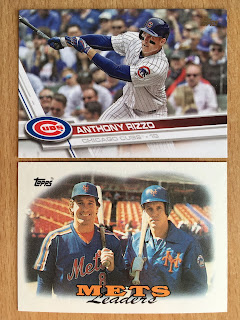 That's a Rizzo card I don't have versus the Mets Leaders from 1988 Topps?  I think that's' Kevin McReynolds and Kevin Elster on the front? Does that sound right?
Doesn't matter. Rizzo for the win. 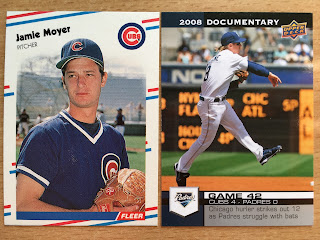 AHHHHHH! Interesting match-up here!  It's an early Jamie Moyer card, perhaps his Fleer rookie card?  The 2008 Upper Deck Documentary cards are all over the place. This one is a Padres card, or is it? Let's check the back. 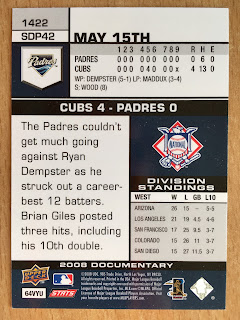 Well, I'll be. This one is all about Ryan Dempster and the Cubs. BONUS: Kerry Wood earned the save!  Woot!  What a find in Les Cartes de Baseball!

Folks, we have ourselves a bit of a contest here! 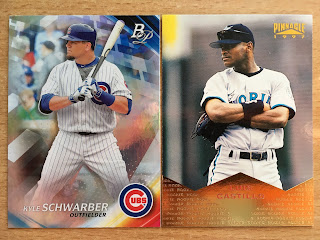 Schwarber... on that design. So shiny... so beautiful!
I've played fantasy baseball for a long time and there was a spell in there where Luis Castillo carried me in steals. This, for what it's worth, is his Pinnacle rookie card. Pretty cool find in a retail re-pack. I'm holding on to this Castillo card for the long haul.
But, the Schwarber will not be denied the point. The card is fantastic! 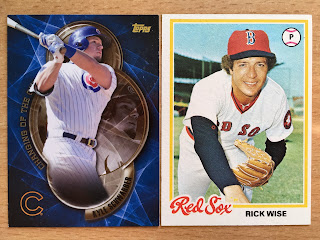 Another Schwarber versus the oldest card found so far in this series. I completed the 1978 set a couple of years ago, so I guess this Rick Wise card is a dupe. Point to Schwarber!

Zippy Zappy takes a commanding lead behind the strength of back-to-back Schwarbers. 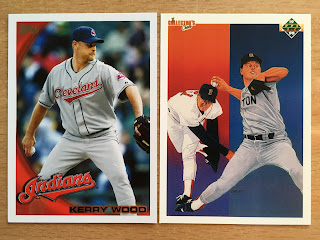 Man, there are some tough match-ups in today's post!  Kid-K is one of my guys, but I have numerous copies of this card of him with the Indians. I loved those checklist cards from Upper Deck. Wonderful artwork of a tough as nails pitcher.  Point to Les Cartes de Baseball. 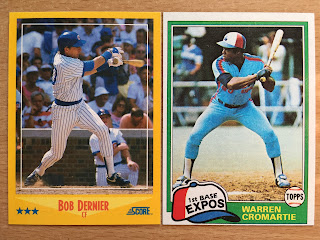 Yikes! Another tough one!
I have a mini collection of Bob Dernier, and this one is new to the binder. But, early 80's road jerseys are awesome. So are Les Expos. Look at that batting stance... so wide. Just by the stance I would say that Warren Cromartie never hit for much power, because his core is almost centered between his feet. Doesn't leave much for weight shift whatsoever. Let's take a look at Cormartie's career. In a 162 game season he averaged 9 homers... that's actually more than I gave him credit for and twice as many as Bob Dernier.
I think I just talked myself into giving the point to Warren Cromartie.

Who saw this coming? Les Cartes de Baseball evens up the score! 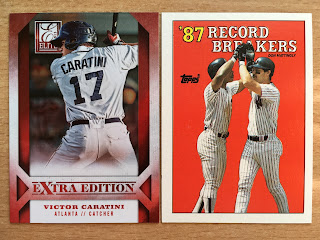 Things just keep getting more and more difficult. I love the Record Breakers and wish Topps would bring them back. Victor Caratini as a Brave, but I don't think he has a card as a Cub... yet. This one is going with me to the Cub Convention for an auto if the opportunity arises.
The point goes to ZZ for helping the Cub Convention cause! 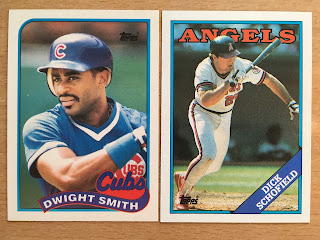 I remember the 1989 Topps Traded sets flying off the shelves in my area because of the Dwight Smith and Jerome Walton rookies in the set. I love the brightness of the red back on this card, too. Dick Schofield, you never had a chance. 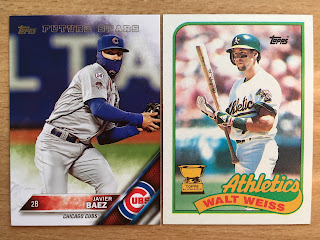 Another tough match-up to judge. A Future Star 2B/SS Cub versus a Rookie Cup SS for the A's. Weiss had a nice career, but Javy is a special talent and may yet out perform Weiss. Plus, I like the ninja look Baez is sportin'.
Javy earns the point.

That'll do it!  No more cards in the Zippy Zappy packs. Which is too bad, because look was leftover in Les Cartes de Baseball re-pack: 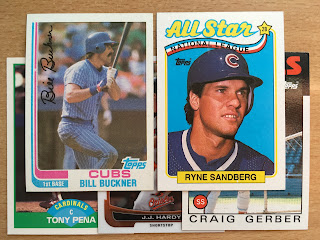 The Tony Pena card would have definitely been a loss, but Bill Buckner and a Ryno are solid cards for a re-pack.

No surprise here, ladies and gentlemen. Zippy Zappy and his repacks remain undefeated.
A big thank you goes out to Kenny and Mike for providing the cards for this Pack War series. It was a lot of fun!