To Death Valley and Back 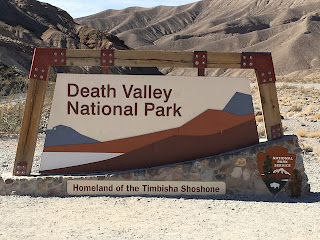 Let's just get the subject of the weather out of the way first. It has been miserably cold here in P-town for the better part of two weeks. Thankfully, Laura and I had a six day escape planned to get us out of the Midwest before frostbite set in.

Our trip didn't start off great. We had a four and a half hour delay departing from Peoria because some mechanism in the airplane's engines had frozen overnight in the sub zero temperatures. Go figure. We missed our tight connection in Dallas/Fort Worth by a mere four hours and were bailed out by our good friends Jeff & Nichole who live in the area. They treated us to jalapeno deviled eggs, pumpkin risotto, carrot soup, beer, wine, and mint chocolate chip cookies. They also introduced me to The Crown. 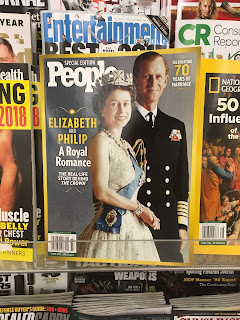 If only all missed connections could turn out so positive. Jeff & Nichole really saved the day and turned what could have been a miserable experience into a very enjoyable evening.

The next day's travel found us landing in Las Vegas. We made for the Hoover Dam and took their tour of the power plant. What a feat of engineering!
I learned much on the tour including that 96 workers died during the construction, and their pay was only four bucks a day. This was during the Great Depression, so I guess you take the work and pay when you can get it. Each day was broken into three shifts and they worked around the clock for four-plus years. The workers were housed in nearby Boulder City, because the government didn't like the idea of them living in Las Vegas. Ha! 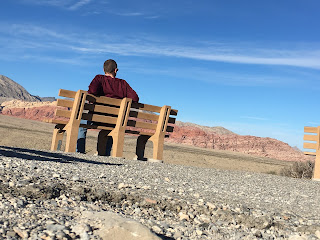 After the dam tour we circumnavigated Vegas, stopped at Red Rock Canyon and spent New Year's Eve in Pahrump, Nevada.

There's not much to do in Pahrump, but it is the last stop before entering Death Valley National Park. 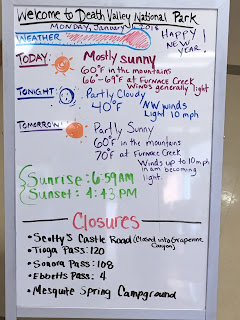 Ah, now that's a forecast that I can get behind!

We stopped at Zabriskie Point first and then the Borax Works, below. 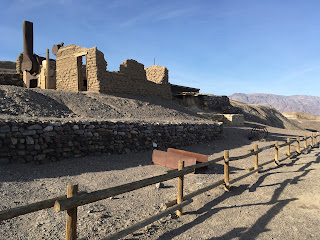 We found water in Death Valley at Salt Creek. The area only receives two to three inches of rain a year, so any amount of water to be found was a shock to me. 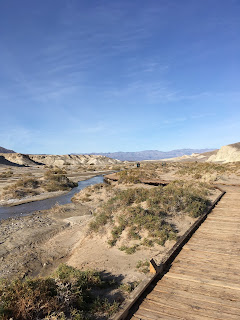 The water is very salty and not for human consumption.

Laura wanted to hike Fall Canyon and thought a nice scenic drive on a 24 mile long, one way, gravel road, along cliffs and through canyons was the way to go. 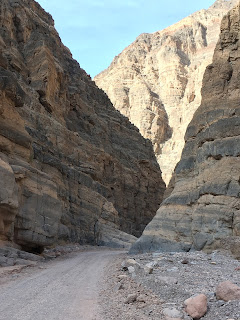 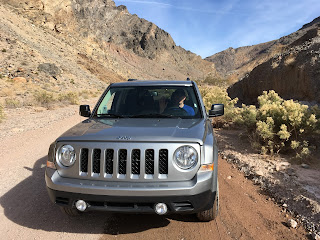 The rental car, a Jeep Patriot, seemed to handle the trek just fine. Luckily, it had high enough clearance to get through some of the rough spots. I do wish we had looked into getting something with four wheel drive, but I suppose that just made it a bit more challenging and fun!

Personally, I enjoyed driving through Titus Canyon, but I know for a fact it freaked Laura out a bit. 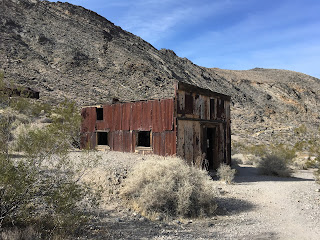 On the way to Fall Canyon we stopped at Leadfield, which is a ghost town from the 1920s. 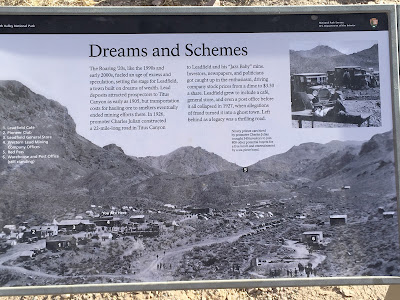 Why someone would build in a difficult to pass through canyon is beyond me. I guess that's why the town couldn't even make it two years before being abandoned. 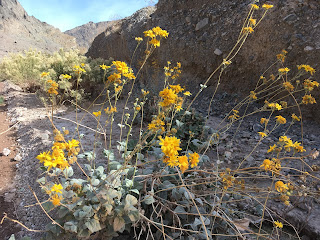 Flowers! There is more than enough rock and sand in Death Valley. Flowers are a rare occurrence!

Here's a picture of Ubehebe Crater, which is the remnants of a two thousand year old volcano. 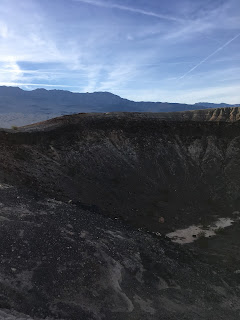 We walked the entire perimeter. Plenty of lava rock broken into small pieces made the hike a little challenging. 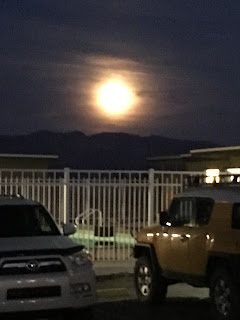 That night we went to the Mesquite Valley Sand Dunes that evening to listen to a talk from one of the park rangers. The talk centered around the full moon, which was also a super moon. The picture is from the parking lot of one of the few restaurants in the entire 3.3 million acre national park. For what it's worth, the food and gas prices are comparable to what you'd find in Hawaii, another "remote" location. The food though... um, left a little to be desired.

The next morning we hiked Mosaic Canyon and had a really nice experience. 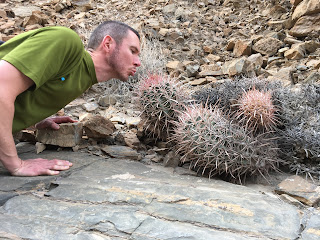 Above is a picture of me being a little goofy with a cactus. If you can't have fun on vacation, then you're doing it wrong!

Afterwards we took a drive to see the old Wildrose Charcoal Kilns. 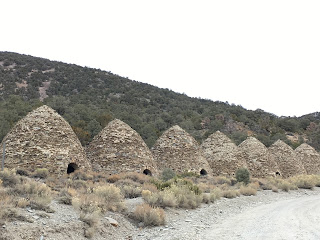 They looked like gigantic beehives. and stood probably eighteen or twenty feet tall. We were fairly high up in the mountains at this point and we finally got to see some trees.

For those of you not in the know. Death Valley is located a couple hours west of Las Vegas in eastern California. It's desert country and is aptly named. Temperatures in the summer are regularly above 110 degrees Fahrenheit and the record temperature on Earth was set in Death Valley at 137 degree.  So, water, flowers and the trees shown in this post are quite rare. To put things in perspective, we saw eight birds during our time there and six of them were crows hanging around the dumpsters of the restaurants. The other two were some sparrows which were surely lost. It is not easy for wildlife to survive out there. 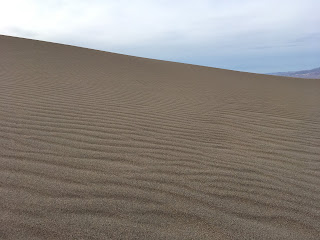 We went back to the Mesquite Valley Sand Dunes that afternoon and did some serious barefoot hiking. 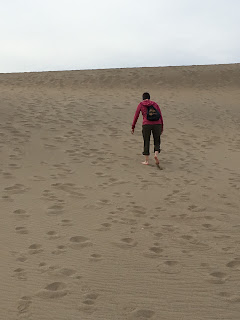 We "climbed" up some sand dunes and walked along the top ridges. There were some families who brought sleds to slide down the steeper ones. It was a really neat experience.

That evening we drove out to Badwater, which is the lowest elevation, at 282 feet below sea level, on the North American continent. 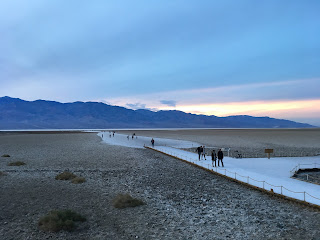 All the white you see in these pictures is NOT ice, snow, or any other form of water. 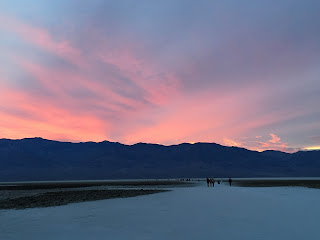 Salt. It's all salt. 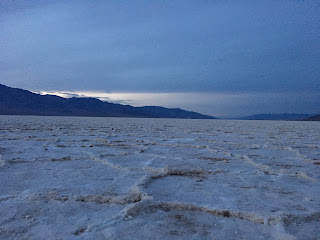 The above picture shows the small salt ridges through out the basin. The ridges were sometimes as high as two inches and they often times formed geometric shapes on the basin floor. 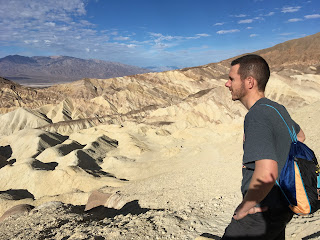 The next morning was our last in Death Valley. We started it off with a long hike through Golden Canyon. 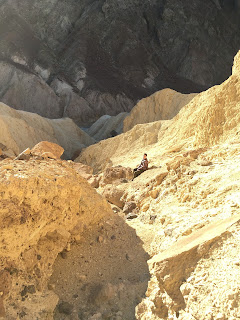 When the sun hits the rock it's very easy to tell why they named it Golden Canyon. 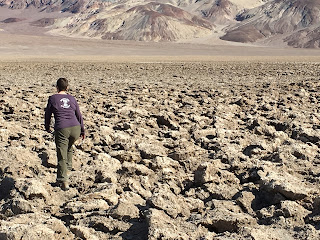 We drove out to Devil's Golf Course, which was like being on another planet. It is named Devil's Golf course, because it is said that only the Devil could play golf on it's surface.

Our iPhone cameras didn't do this one justice. Below is a picture of what is known as Artist's Palette. 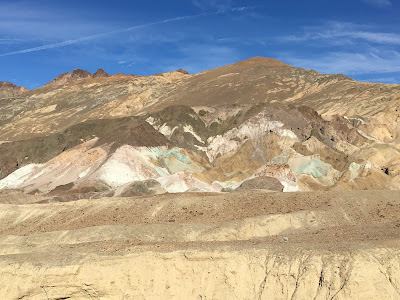 This portion of a mountain is comprised of many different types of rocks and ores. There are reds, greens and yellows in there... I promise! 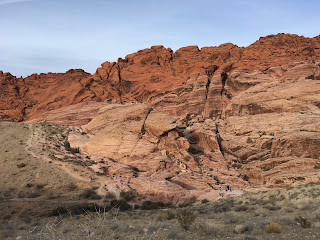 We had any early flight out the next morning so we took off for Las Vegas. On the way back we were able to actually go through Red Rock Canyon. (It was filled to capacity when we drove past the first time.)

That evening we drove "The Strip" and took a tour of The Neon Museum. 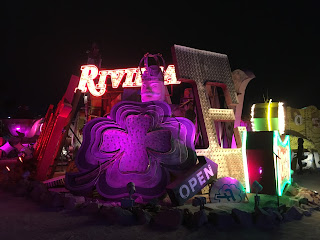 We're not gamblers, so I found this nice little tour which featured many of the old signs from The Strip. The tour lasted about forty-five minutes and we learned much about the history of Law Vegas. My favorite information offered during the tour centered around Benny Binion, who was largely responsible for the Las Vegas we know today. Binion was the first to put carpet in casinos, the first to provide seating for gamblers, and the first to give all gamblers a free drink.

We left the 60 degree temperatures of Nevada and California and landed in P-town yesterday evening, after another three hour delay in Chicago. Apparently cold weather and getting in and out of Peoria do not mix. Sigh.

Overall, it was great to experience so many new things and my wife did a wonderful job planning the trip. I would definitely suggest checking out Death Valley. Just don't go in the summer!