My wife went to her parents' place to help paint a bathroom and I stayed local and went to a card show in Normal. Already, this story is starting off on a good note.  Oh, and yes, the city's name is Normal, which in itself is not normal if you ask me.

I arrived about an hour after the show started and found five dealers had set up in the side room attached to the only brick and mortar shop in the college town. I spent about an hour digging through the dime boxes at one of the dealers. Actually, the sign read, "10 for $1 or 100 for $5." You don't have to be a math teacher, like myself, to understand those aren't really dime boxes, but nickel boxes. I came out with 212 cards, and some other odds and ends, like the three metal tins I fit all the cards in, for a ten spot. Good deal! Not quite Dime Box Nick status, but I was rather pleased! 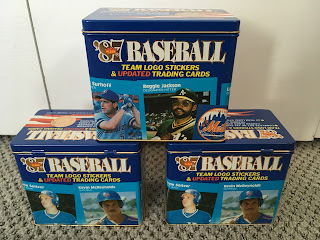 You may be thinking, where's the pictures of the cards? Sorry folks, no pictures from the nickel boxes, because about 95% of the cards are earmarked for bloggers I either owe cards to or others who I hope to trade with in the future. I don't want to ruin the surprise. 😁

I made some 5 for a $1 purchases at another table and then skipped two of the other dealers. One was intentional, as he only carries high-end modern stuff that I really don't have much use for.

The other dealer I did NOT intend to skip. I've never seen him before, and he had old vintage, in poor condition selling at 10% of the listed book value. I was going to buy my first Mantle, Mays, and Musial for my Hall of Fame binder, and then empty out the rest of my wallet at the end of my time at the show to snag for HOF names. I told him I would be back, but I had to make my other purchases first, because I couldn't empty my wallet at the first table I stopped!

Well, sometime in the middle of my nickel box dig he started packing up and I didn't notice because I was in the middle of nickel box dig. I caught him when he was nearly done packing, almost three hours 'til the end of the show, and he said he had other places to be. I was disappointed and he was rather short with me. His tone hurt, but missing out on the fuzzy corners, creases, holes, and stains of vintage Mickey Mantle hurt more.

Alright, let's end finish this post on a positive note! I met my second blogger. My first was Matt, the author of the recently rejuvenated Once a Cub blog, and that encounter happened at a South Bend Cubs game a couple of summers ago.

Mike, also a Cubs guy, just started his blog called WaxPackHero back in December. I bought mostly some trade bait at his table, but was also able to find some Cubs I didn't have including a new Ryne Sandberg card. Behold! 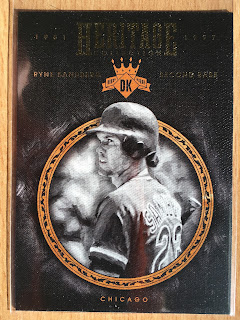 The above card is an insert card the the 2016 Panini Diamond Kings release, entitled The Heritage Collection. It's a little dark, but a nicely designed card overall. 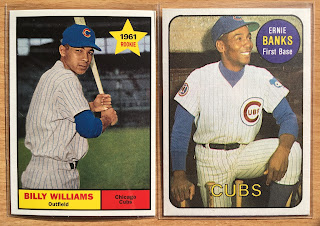 I found some reprints of the big name guys, Billy and Ernie, to add to their binders. 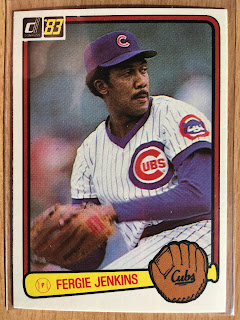 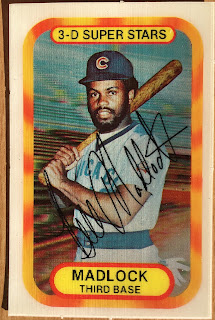 I love early 80s Donruss and this Fergie is no exception. Man, and take a look at that 1977 Kellogg's 3-D Super Star of Bill Madlock. Barely starting to curve and not a crack in it! 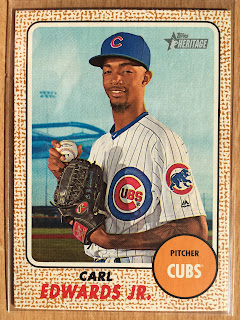 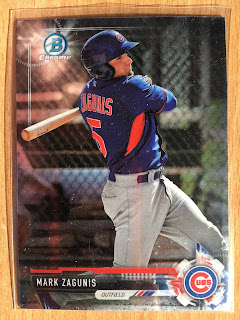 Edwards will hopefully be a force out of the pen in 2018. I'm not sure the role Zagunis will play, but I'm sure he'll be up from Iowa the first time an outfielder hits the disabled list. 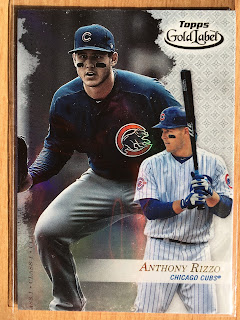 Some cards just don't scan or photo well and this Rizzo is one of them.

How about some non-Cub stuff? 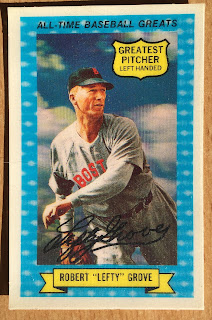 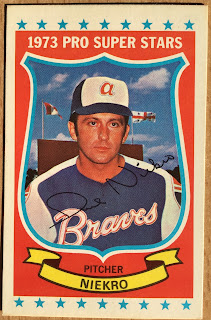 These will all go in my Hall of Fame binder. The Lefty Grove is my favorite, mostly because he doesn't have many cards and the color on this one is fantastic. I've never seen cards like the Niekro before. The flags flanking Niekro's head have me wondering where this photo was taken. 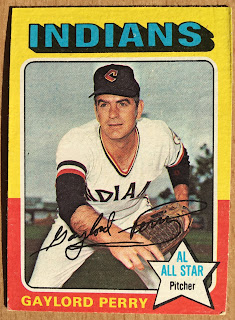 I had fits trying to secure the right angle for this Hank Aaron hologram card and just gave up when my cat got in the way. 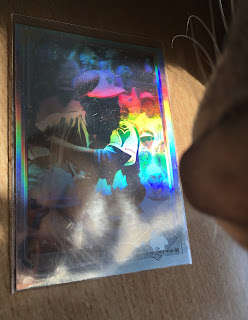 When the angle is right the true colors of the picture really pop, but otherwise it looks very much like a rainbow in the middle of a cold and dreary January day.

Randy Johnson cards are something I rarely pass up. 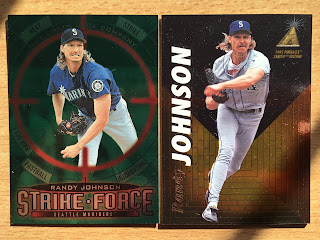 He was The Man on the mound and seemed like a pretty fun character off it.

Lastly, we have an Austin Meadows card from the 2015 Stars N' Stripes release from Panini. 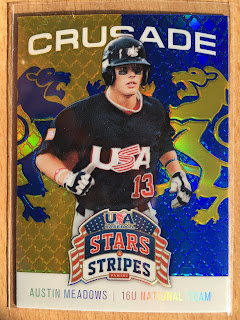 I built this set from packs and may even have this card already, but the contrasting colors of the Crusade cards are so sharp I had to pick this one up. I think Meadows is a decent NL ROY candidate in 2018. We'll see!

There were more cards in my haul from Mike's table, but those are ticketed for trade packages. I felt really good about my purchases from his table and I was glad we were able to talk cardboard and blogging a little bit. Meeting a blogger, face-to-face, is always an exciting experience!

His blog may only be a couple months old, but he has excellent reading material up there already. My favorite is his post about his 2018 Purchase Plan, which includes buying two cases of eight different Topps products and trying to turn a profit on the whole experience. That should be a fun follow. I've always thought about doing something similar: sell enough of the product off to fund my hobby. I think it would stress me out though.

I also really liked his post on 5 Helpful Ideas to Help Grow the Sports Card Industry. You should give Mike's blog a look if you have the time. He's genuinely excited to be rejoining the hobby and he certainly is diving right in by collecting, selling as a dealer, and blogging!  Good luck, Mike!
Posted by P-town Tom at 1/28/2018 05:21:00 PM