No Flagship for Me

I like to trade within our little community, and I can usually put together a team set of Series 1, Series 2 and Update through swapping cardboard. Since then I have decided to build other sets and be patient as my Topps flagship Cubs team sets are completed through trades.

In fact, last year I didn't buy any packs of Series 1, only one pack of Series 2 (which I still haven't opened), and one jumbo pack of Update. I've been saving that Series 2 pack (on the right) for a rainy day, but it's been too stinking cold as of late.

I'm not sure what I'm going to set build this year, but the early leaders are Stadium Club or Wacky Packages. Depends on the design of SC and if players are included in the newest incarnation of Wacky Packages.

In the meantime I've decided to activate a 30-day free trial of Netflix and binge watch some television series. I'm finally finishing off the last season of HIMYM and I hope to get started on either Arrow, The Flash, or The Clone Wars.

My sister gave me a Roku stick for Christmas which plugs into the HDMI port on my flatscreen. I had the first issue of the Roku and the newest version certainly does not disappoint. 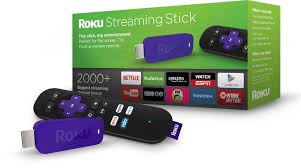 While binge watching television I've been working on a new project.  You knows, multi-tasking . . . My sister also gave me this nice Topps album from her collection and now I'm trying to fill it with one card of every player who has been enshrined in baseball's Hall of Fame. 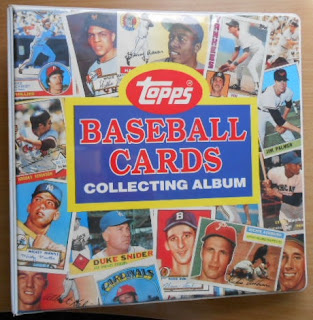 It's a slow, but fun process. I've got all the players from the initial class covered, but there are MANY gaps after that. I've decided to order the players in pages by the year they were inducted, rather than alphabetically, because it'll be easier to keep things in order when new players are enshrined. 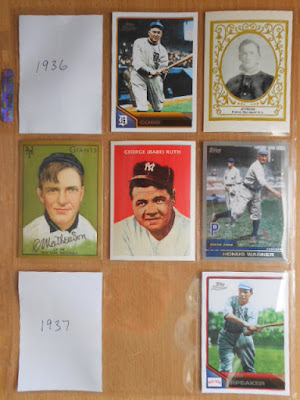 Many of the cards are reprints from the "Cards Your Mother Threw Out" insert set or from Topps Archives. I would eventually like to replace all of them with vintage when fiscally possible. I've spent many a winter night sifting through cards and it's been fun!

Lastly, I was honored to be asked to participate in JBF's Super Traders group. PATP is putting together a list of the members in the group and I think this will be a fun and easy way to maintain my interest within the hobby. It should also help motivate me to pare down my collection. No more selling team lots on eBay or reaching out to make trades. Now I can just find a flat rate mailer, reference the address list and mail away without worries. And of course those non-Super Traders, who I frequently send packages to (like ZZ), won't be forgotten.

It's been a slow start to 2016 as far as new cardboard goes, but that was to be expected as there hasn't been a card show within 125 miles of me. I've been tempted on two occasions to hit the road to attend a show, but whole the sitting in a car for more than four hours is quite a deterrent. Things will pick up sooner or later, but probably not until baseball season is among us. By then I'll be coaching and have less time, but I'll have been bitten buy the collecting bug.  It really is hard to avoid come Opening Day!