Some of us are still sorting through cards, whiles others are already living up to the Super Traders moniker.  I'm definitely the former, and Brian, from HSCA, definitely qualifies as super. Heck, I just finished posting his last package and he's already at it again!

He sent a PWE my way and it was full of some great stuff. Right out of the gates we have ROCK SHOUDLERS! I miss Rock. He was a PC guy for a brief spell until he took his talents to Texas. 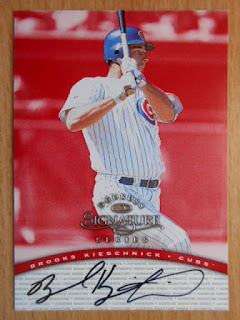 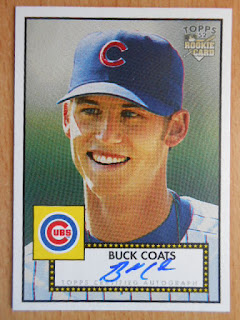 Another Kieschnick auto from the 1997 Donruss Signature Series set, but this one has a red brackground.  Brian must have gotten a good deal!  Buck Coats had a brief stint with the Cubs back in 2006.

A diving Oh Henry!  It's a pretty sweet action shot, but a horizontal card would have maximized the potential of this card a bit more. 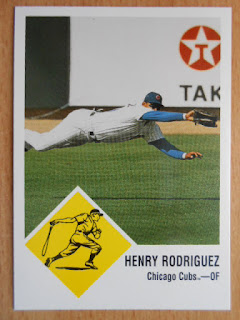 This is a 1998 Fleer card modeled after the 1963 Fleer set.  I don't think Fleer did any horizontal cards back in the day.  I can't fault them for staying the traditional route. 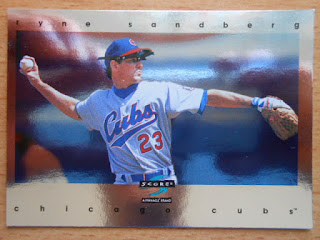 I have the base card from the 1997 Score set, and the one above is the foil board Showcase parallel. This is number 792 in my Sandberg player collection. Every time I see that number I think of baseball cards. Yes, I am a product of the junk wax era and Topps sets numbered to 792.

And finally, we're 18 days past the release date of 2016 Topps Series 1 and I finally have my first card of the new collecting season. That is correct folks: I have not bought any packs nor have I made a trip to my LCS during this span. 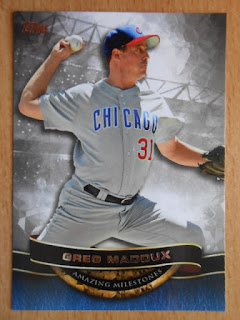 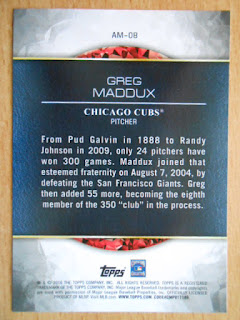 I think the era of 300 win pitchers has pretty much ended. Starters don't go as deep into games anymore and everyone is worried about overusing arms.  It's crazy to think that Maddux pitched 23 years and logged 5,000 innings while Pud Galvin pitched 8 less years and logged 6,000 inning. The days of the Pud Galvin type hurlers are long gone.