Haggling for the Super Traders

I've been sifting through my collection for the past month getting ready to make my first batch of packages for the Super Traders. I don't purchase a lot of product, so I thought I would search Ebay for a large auto or relic lot to mix into the packages. After watching a few of those lots go for $100 I decided to reach out to a seller who was advertising lots built with 1 Auto, 1 Relic, 1 Star Insert and 1 Star Rookie card.  I mentioned that I was looking for around twenty of the aforementioned lots, but I didn't want any cards of Marlins, Royals or Indians. He complied, but said that he didn't have many relics left and asked if a certified auto or two IP autos would suffice as a fair substitution. DEAL. 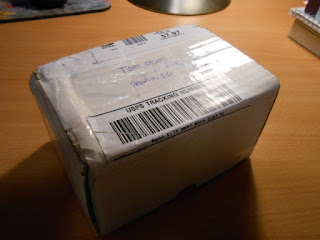 In the end I paid a little over fifty cents per card, which I thought was a good deal after watching other Ebay auctions.

The package had one contained one relic, but it was a keeper for this Cubs fan! 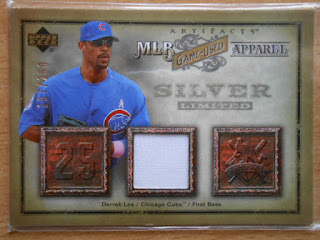 This also happens to be the only serial numbered card (#/250).

There were 52 non-certified autographs in the package.  Most of them are prospects, but there are some major league players with recognizable names. 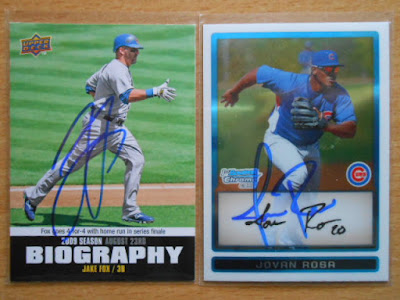 Twenty-one certified autographs were in the package and the Cubs landed one. 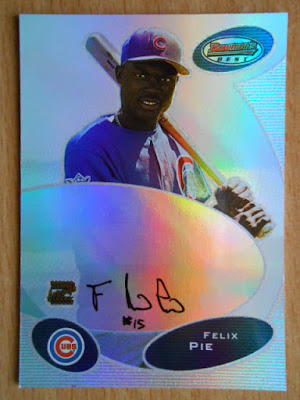 The Cubs didn't pull any inserts, which was too bad. I didn't recognize most of the inserts because they were from when I was on hiatus (1995-2008), and any similar inserts from the lot would have been a nice addition to my collection.

I did get one Star Rookie. 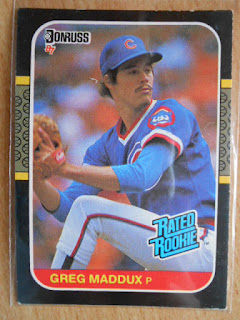 I have about six or seven copies of this card already, but that's okay. Most of the star rookies from the lot are truly stars, but they are largely from the junk wax era.

The cards were split up fairly evenly as twenty-three of the teams will receive at least three cards from this Ebay purchase. The Braves, Dodgers, Yankees and Astros made out the best with eight to ten cards each. Two teams were skunked overall, which I was disappointed about. I'll just have to hunt down some more cardboard.

Be patient Super Traders, for high school baseball season is upon us!  Tryouts for my team start tomorrow, which means any chance that I might have had to get to a post office after school is now long gone. I'm thinking about getting a stamps.com account and shipping from home. Maybe during my spring break at the end of March?  #patience #SuperTraders
Posted by P-town Tom at 2/28/2016 08:23:00 AM