I believe this is my third episode of Pack Wars in succession, and all of them have been fueled by the super generous blogger, Zippy Zappy. 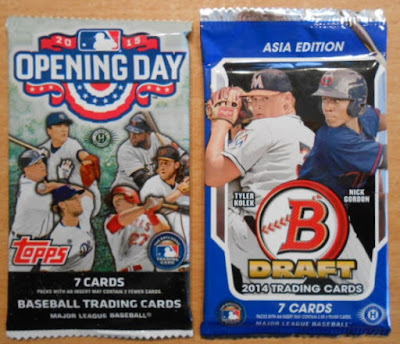 This time around we have a 2015 Topps Opening Day pack versus an Asia Edition Bowman ZZ RePack.  This should be interesting! 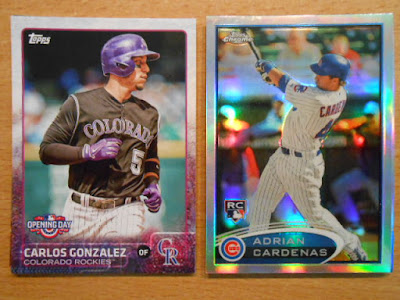 Cargo versus a chrome refractor of the retired Adrian Cardenas.  Would you believe this is my fourth copy of this Cardenas card?  A point for Opening Day for bring purple back. 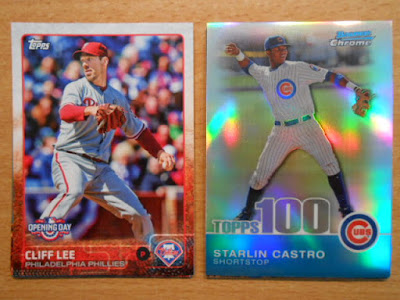 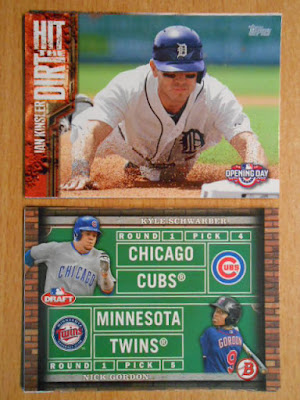 The battle of the horizontals!  I think I had Ian Kinsler on my fantasy roster the last four seasons, but I was able to snag Kipnis this year in the draft, which has turned out to be a stellar move.  So, in recap . . . Not Jason Kipnis against Kyle Freakin' Schwarber!  OD takes a punch to the gut on this one. 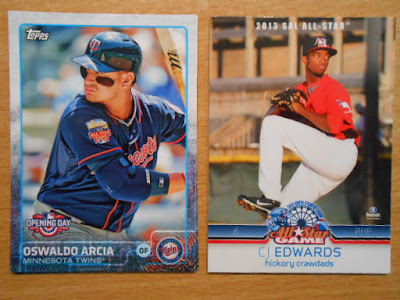 I feel like I should know more about Oswaldo Arcia, but I don't.  Carl Edwards, Jr. has been a regular in these Zippy Zappy repacks, but this All-Star card with him on the Hickory Crawdads is the bee's knees! 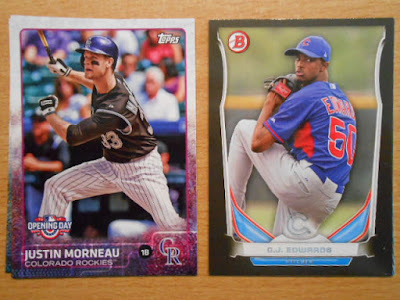 More purple versus an Asian Edition Carl Edwards, Jr.!  Holy Smokes!  They're like regular Bowman cards, but they're not. I'm really digging the charcoal-ish border.  I think I shall dub these Jet Lag Parallels. You know, because I'm sure Zippy Zappy suffered through some serious Jet Lag to bring these back to the States. 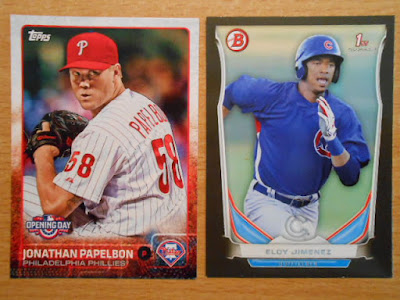 I am NOT a Papelbon fan and I really hope Theo doesn't trade for him in the next two months. There have been rumors.  Ugh.   This would be an easy win for just about any card, but a Eloy Jiminez Jet Lap Parallel makes this a no-doubter! 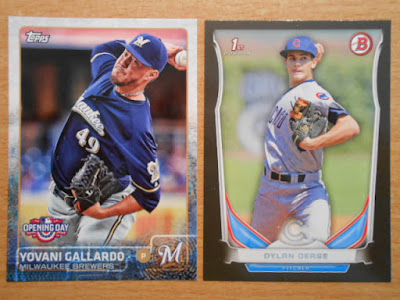 Man, Gallardo was traded to Texas in the middle of January and the release date for Opening Date was a good ten weeks down the road.  I guess it takes more than ten weeks to print and package new product?  Another Jet Lag Parallel and this time it is of flamethrower Dylan Cease.  These Jet Lag parallels are all going straight to the Cubs binder!

This was a pretty lopsided victory for the Zippy Zappy repack, but I guess that's because ZZ really knows my collecting tastes!  Congrats on another victory, Zippy Zappy! 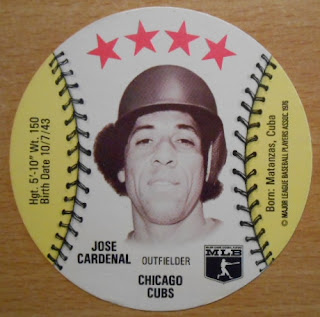 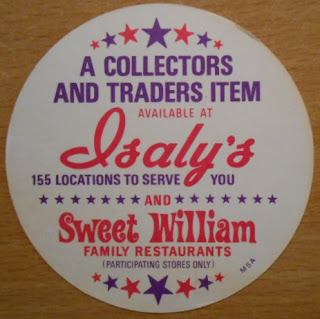 Here's the remainder of the cards from the paddle yellow envelope which were NOT repacked: 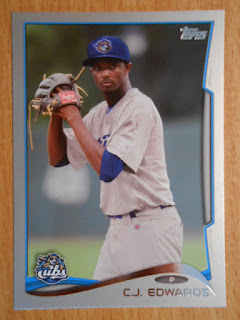 Another fabulous Carl Edwards, and this one is numbered to 25!  Man, I just want to put a little bend in his bill and clip those laces hanging off his glove. 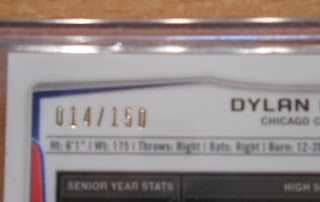 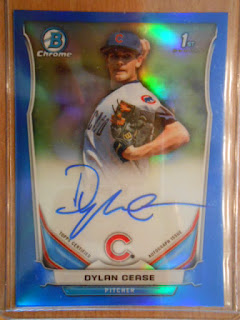 The blue border chrome autograph of the aforementioned fire baller!  What a beautiful card.  I may have to turn into a Dylan Cease super collector now, because this is a nice start on a rainbow.  Bwhahahahaha!

And lastly, a Dexter Fowler autograph from Panini Prizm. 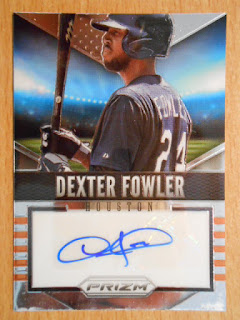 The whole no license thing doesn't bother me here, because I'm much happier not being subjected to the Astros' logo.  I sure do hope the Cubs bring back Dexter for another go around in 2016. He's really done a nice job at the top of the order.

Zippy, thanks for such a thoughtful package!  You hit on a bunch of different threads within my collection AND gave me plenty of blogging material in the process!  I'll have something I think you'll like out to you before too long.  Thanks again!
Posted by P-town Tom at 5/31/2015 04:59:00 PM