Today is the last chance to sign up for my group break.  I implore you to click the link to find out.  Heck, sign up why don't ya?  But if you're not into group breaks and clicking on links, then let me give you a little bit of a preview.

From the group break, in one corner, weighing in at ten cards a pack we have Pacific Baseball Legends from 1990. 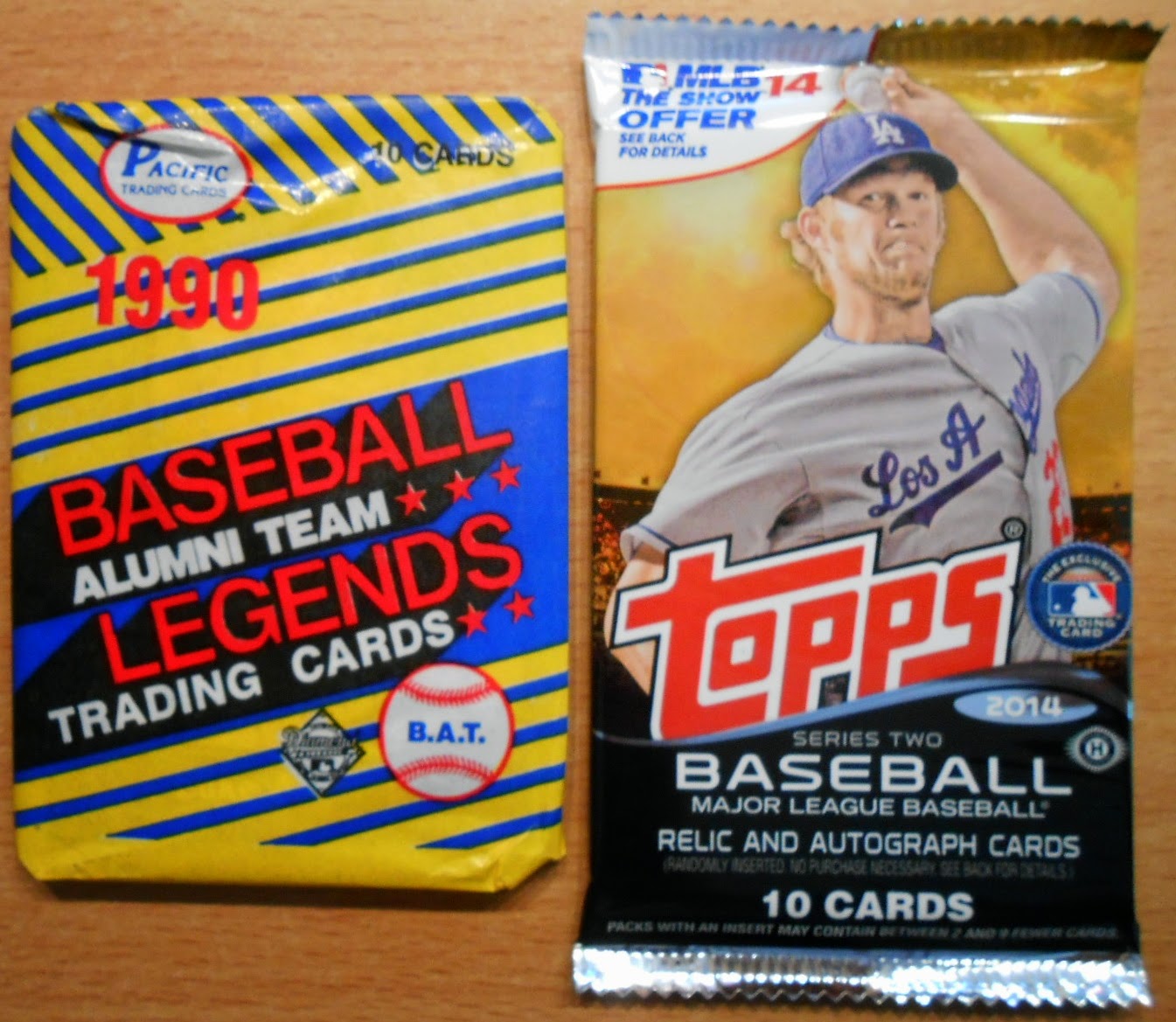 In the opposing corner, from the LCS, we have the recent release of Topps 2014 Series 2, also weighing in at ten cards. 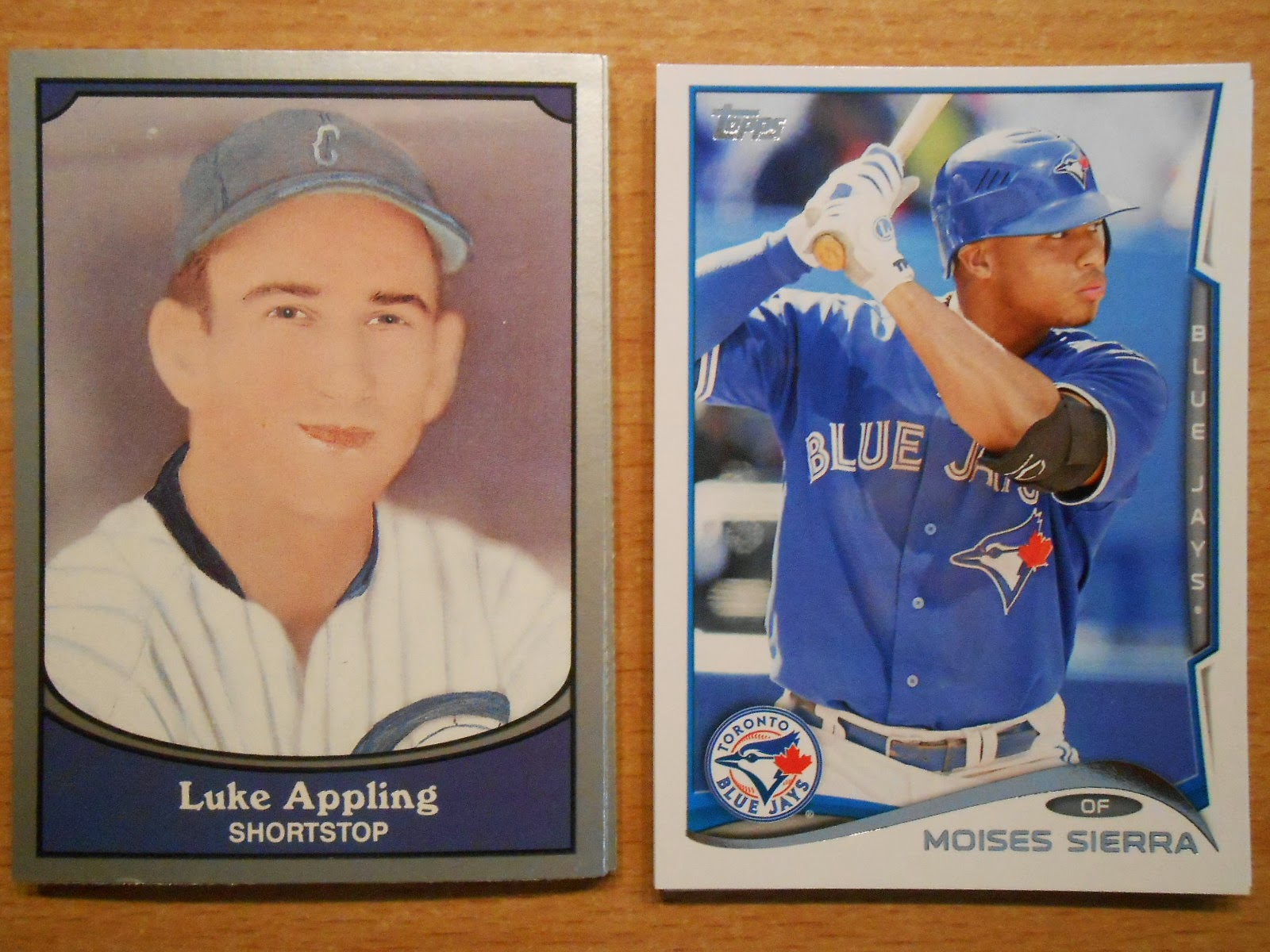 A Hall of Fame shortstop versus in Luke Appling versus a combination of Moises Alou and Ruben Sierra in Moises Sierra.  Heck, it's 2014... we've been experimenting with the human genome for a while now, right?  I'm all about progress and science, but when it comes to baseball players I'll take the Hall of Fame player over some guy who may or may not be genetically composed of two pretty darned good ballplayers. 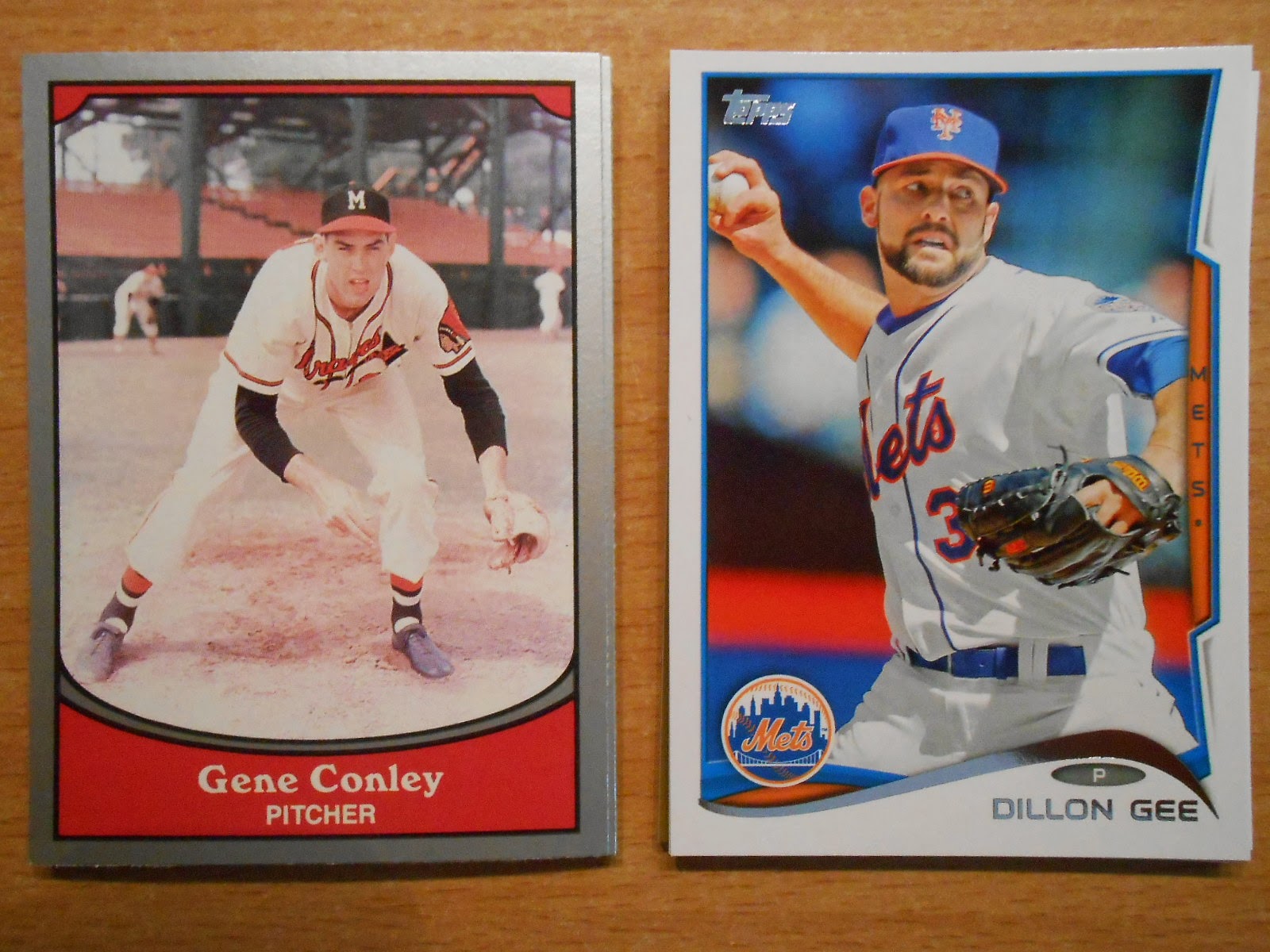 I didn't know anything about Gene Conley before turning his card over.  I do know that Dillon Gee's face that he is questioning the decision to throw a circle change in this count to this batter.  The thought bubble above Gee's head would read, "Oh please, Mr. Giancarlo Stanton, take mercy upon my baseball offering."
In short, posed spring training shots are dull and candid facial shots are fantastic.  Point to Topps. 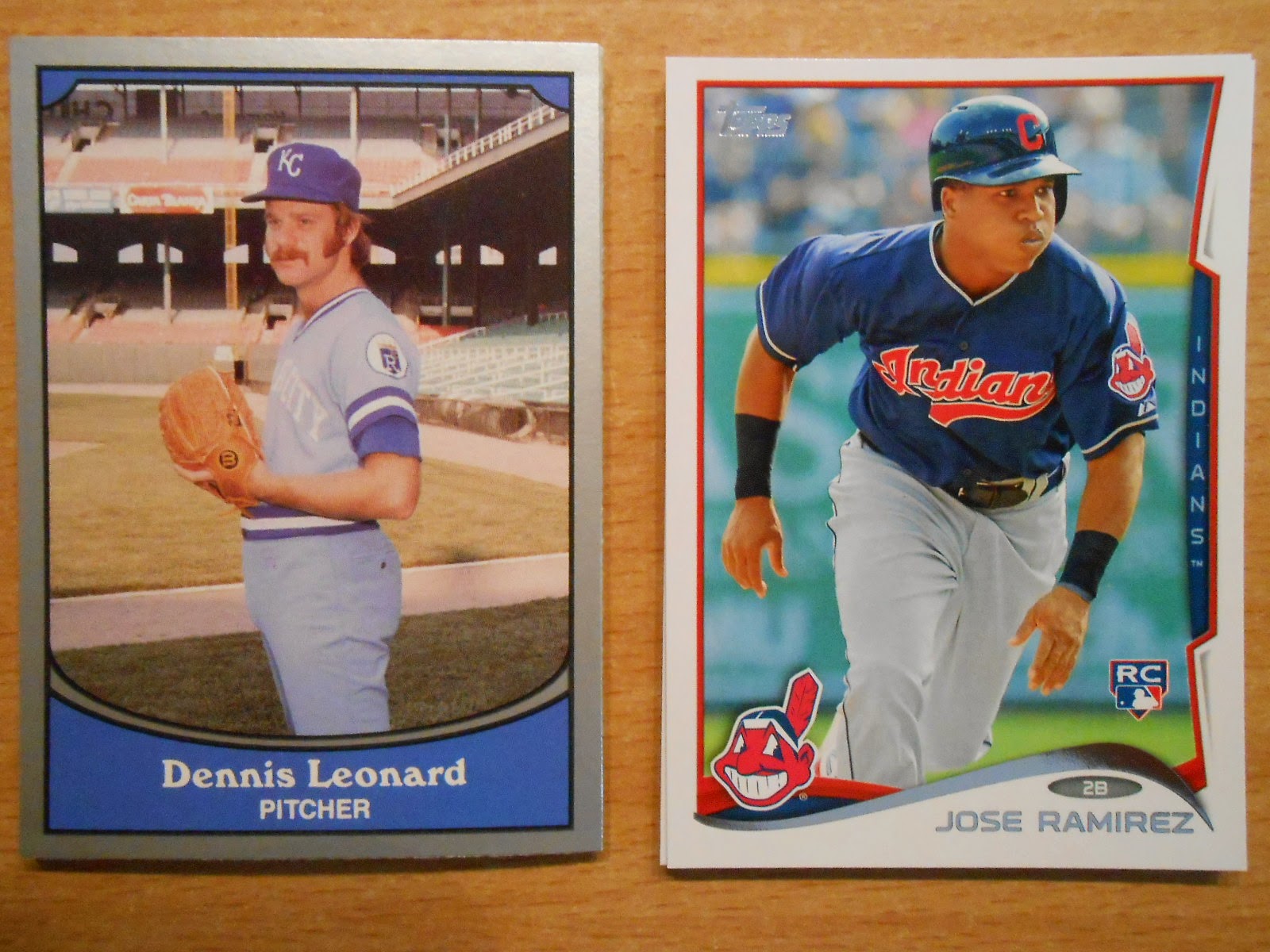 Mustaches rule.  Case closed.  Even rookies like Jose Ramirez should know that! 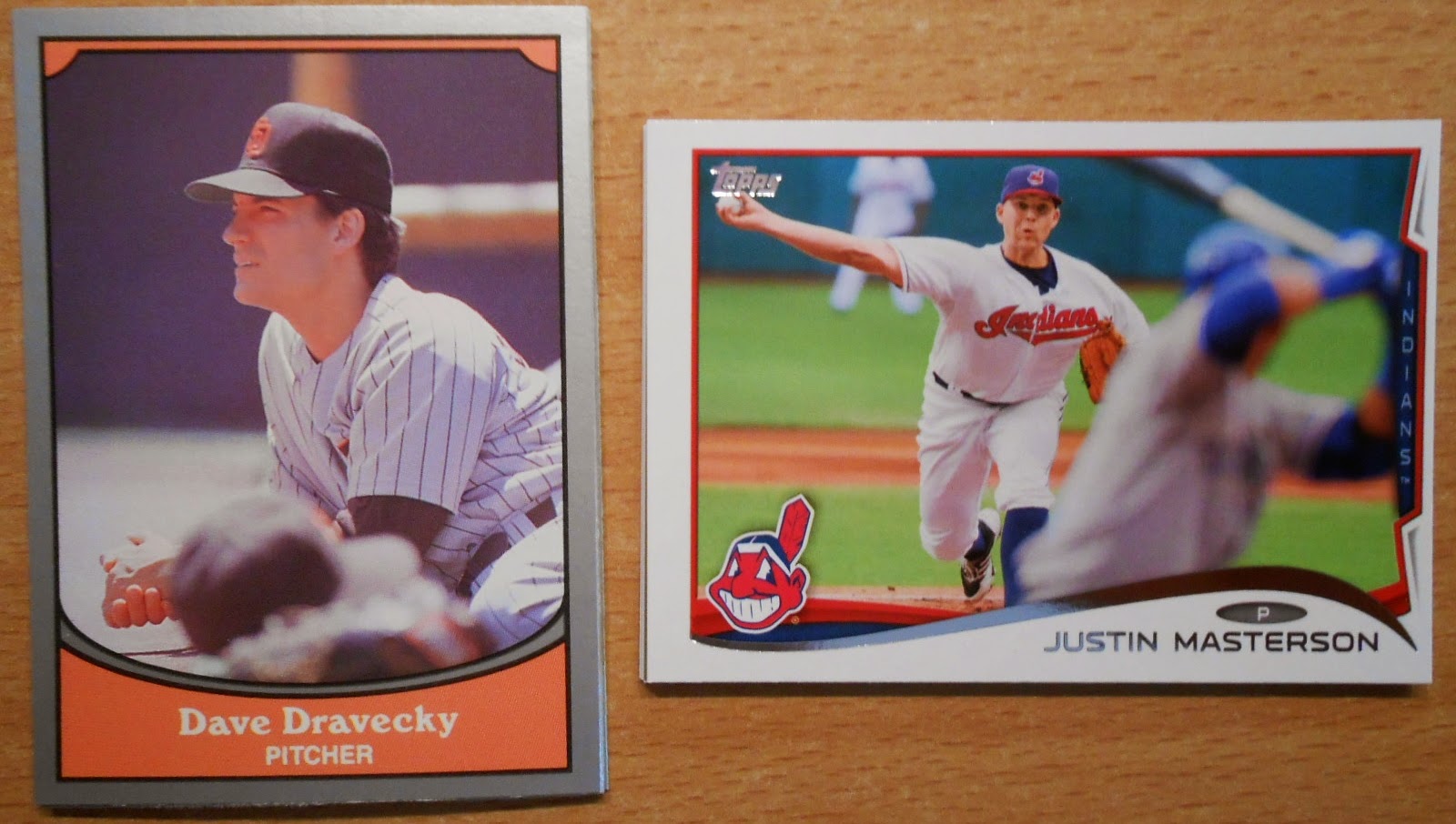 I rooted for Dave Dravecky when he tried to bounce back from cancer.  Who didn't?  But this is a great horizontal shot we're talking about here.  Topps evens the score. 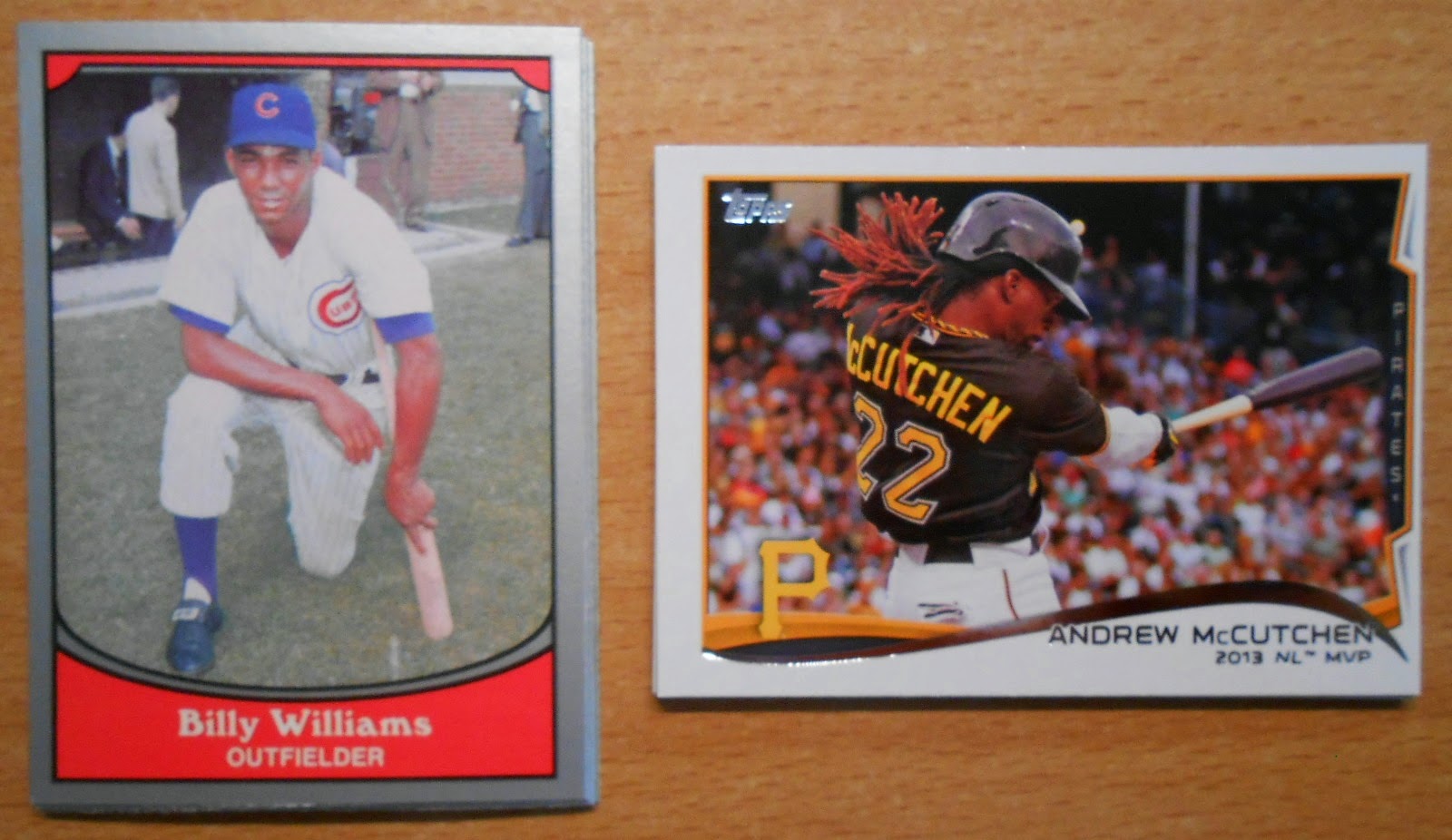 Ahhhh!  Sweet Swingin' Billy Williams versus a horizontal card of the NL MVP.  I could spend hours debating the winner on this one.  Let's just agree to call it a draw. 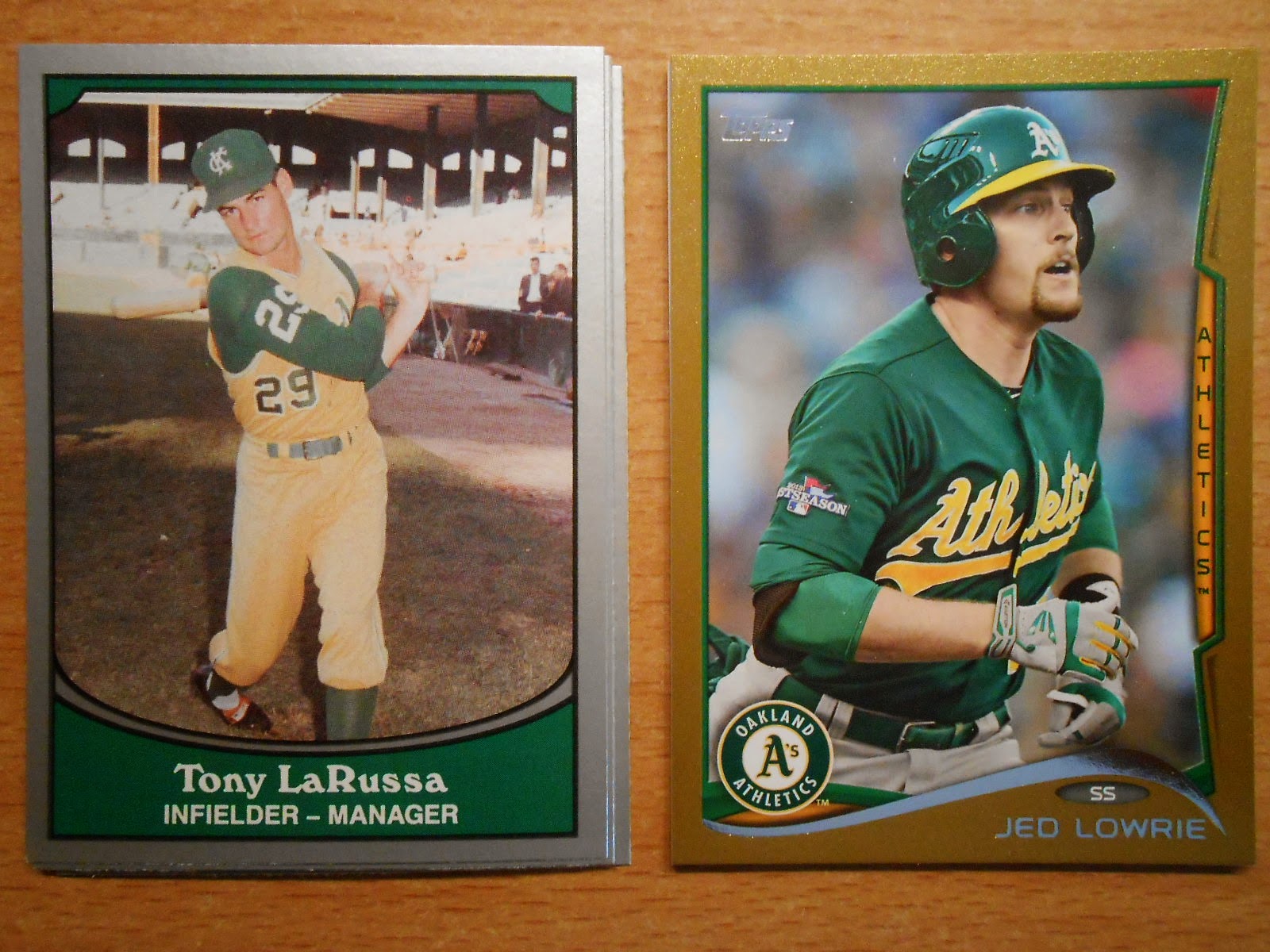 Wow, here's another great match up!  Tony LaRussa in a wonderful Kansas City Athletics jersey against a gold parallel of an Oakland Athletic.  I really like the green jersey and the gold border on the Lowrie card, but I totally have a thing for cards featuring managers during their playing days.  The uniform Tony is rocking is too sweet.  High stirrups, yellow pants and jersey, and sleeveless.  Wow. 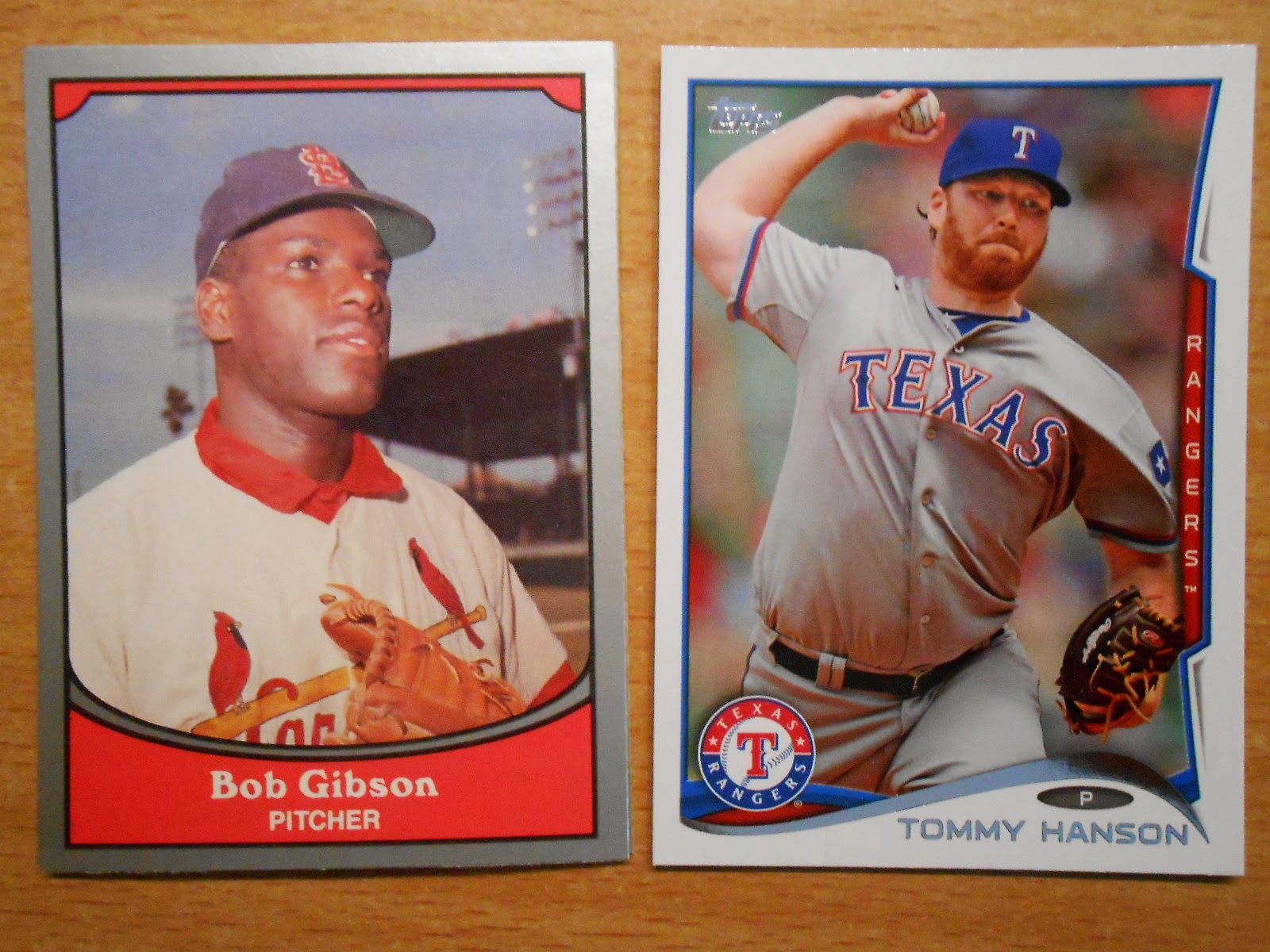 Bob Gibson versus Tommy Hanson.  Next. 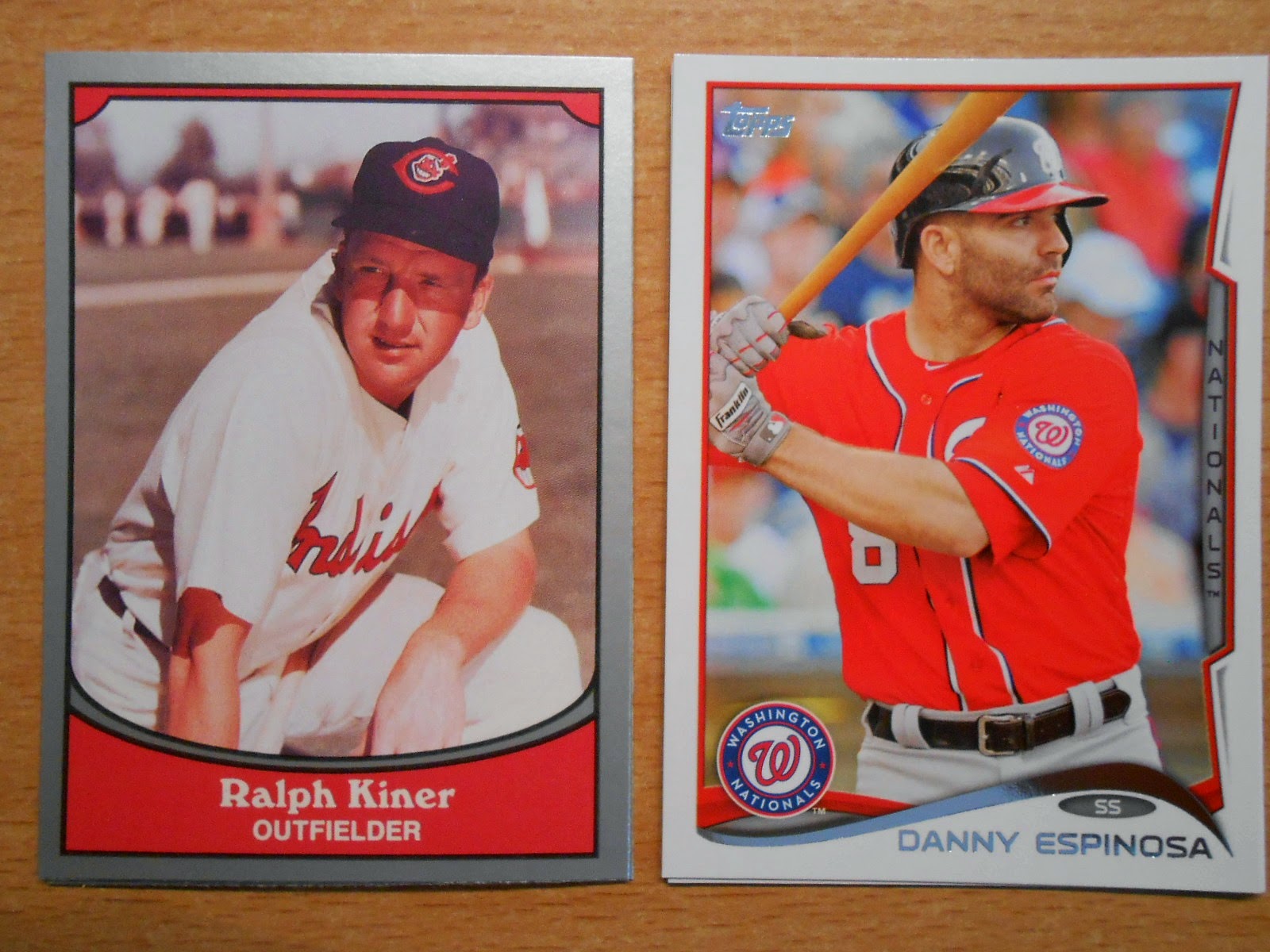 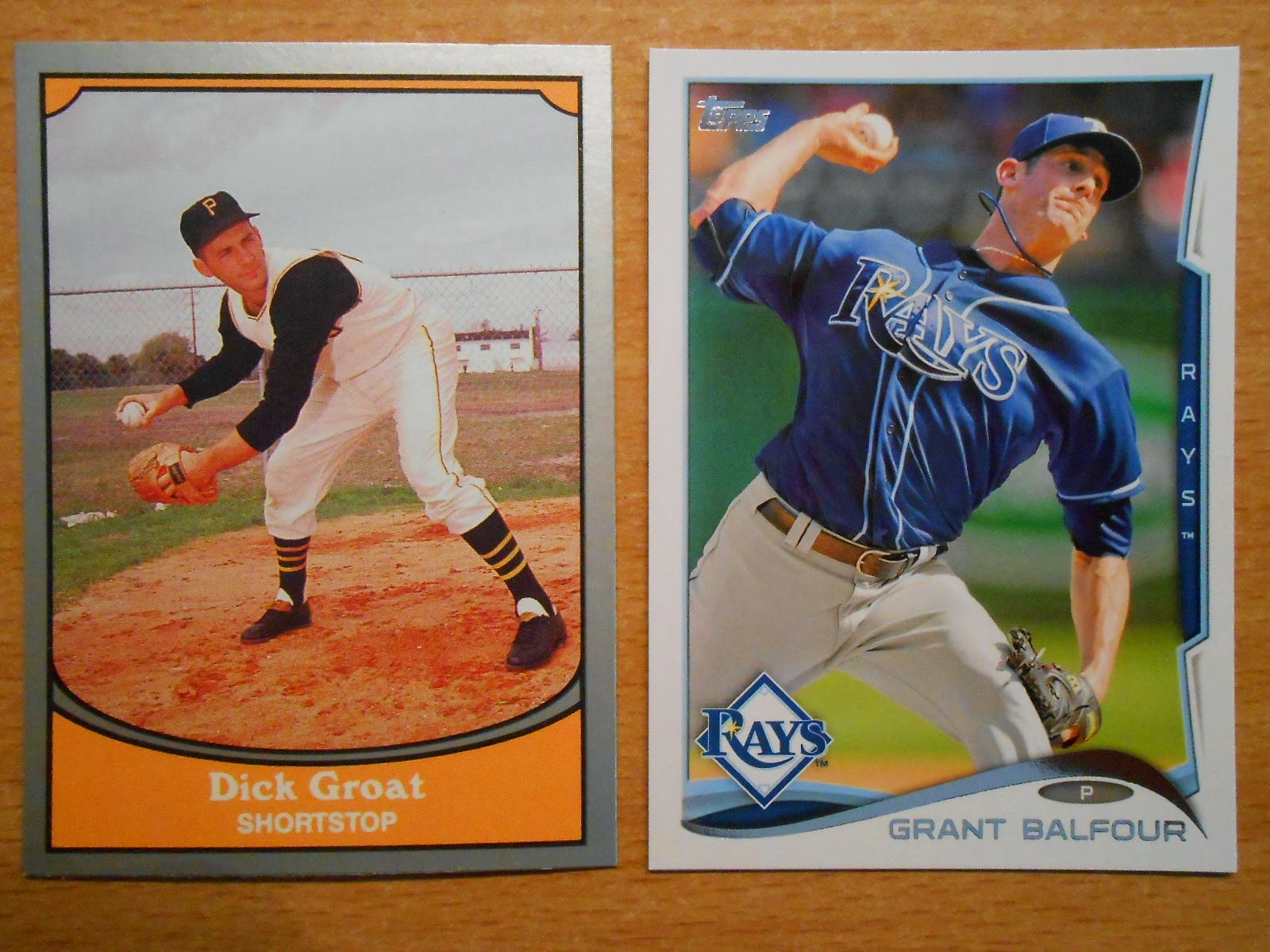 I am not a Balfour fan.  He seems like an angry, angry person.  Nice stirrups, Mr. Groat!  Point to Pacific. 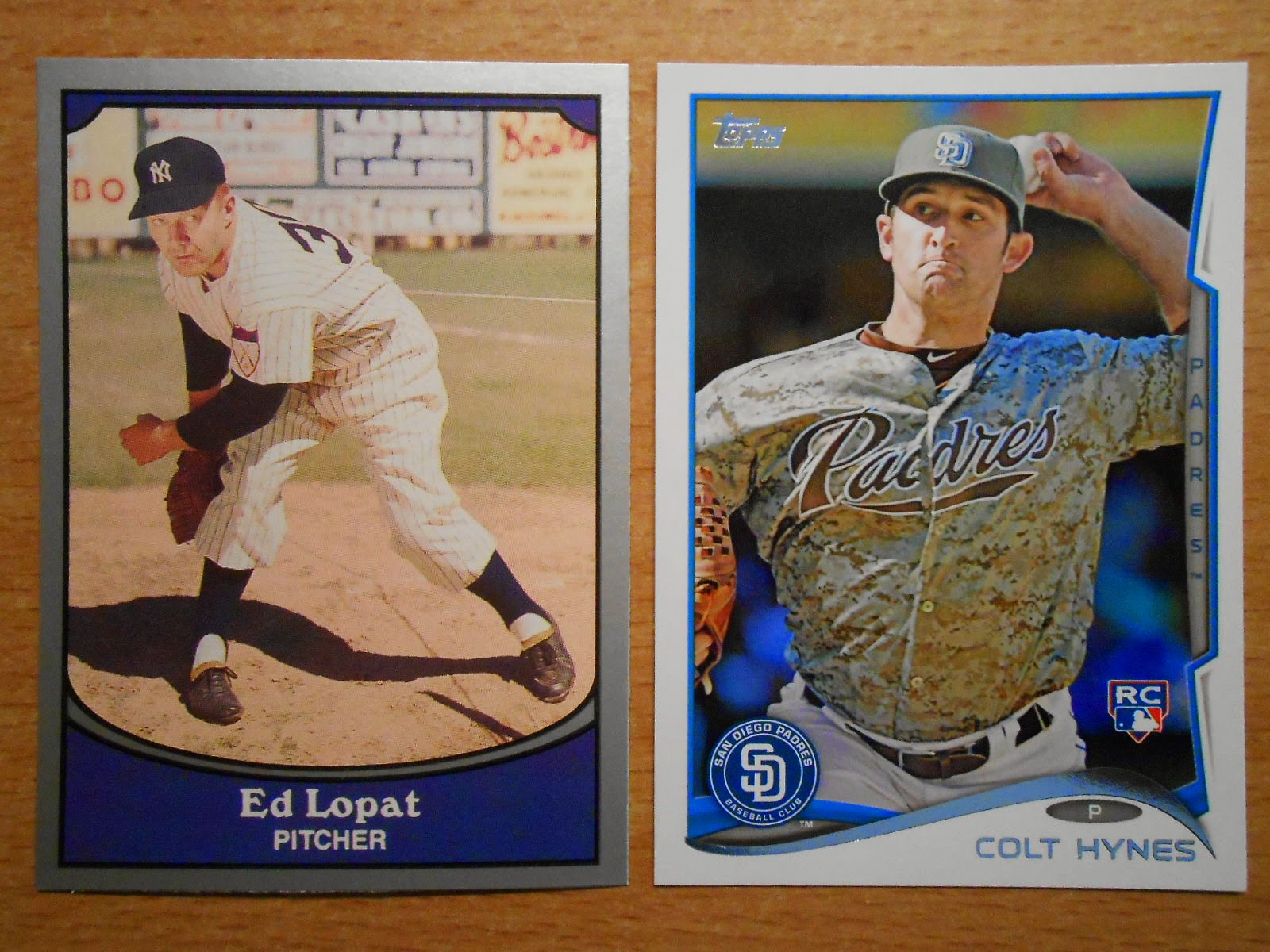 A pair of lefties squaring off in the final frame when the battle has already been decided.  This is kind of sad. I'll take the rook and his camo uniform.