Cards from the Toddfather

I must admit I have never seen any of he "Godfather" movies.  I know, I know.  I should really get on that.  My lack of knowledge about all things "Godfather" doesn't stop me from going all in on my belief that Tim's Home of the Toddfather blog is the best named baseball card blog out there.  Other blogs which would be in the running if I held fan poll: Nomo's Sushi Platter, Coot Veal and the Vealtones, and My Cardboard Mistress.  Fun and creative names, that's the way to go!

If I had to do it over again I wouldn't have named my blog with such a negative Cubs undertone.  Oh, well.  What's done is done.

Anyway, on to the cards!  Tim and I struck up a quick trade and these cards are fresh out of a yellow mailer from today's mail delivery.  No time like the present to blog, especially when one's a teacher and currently has oodles of spare time to do so! 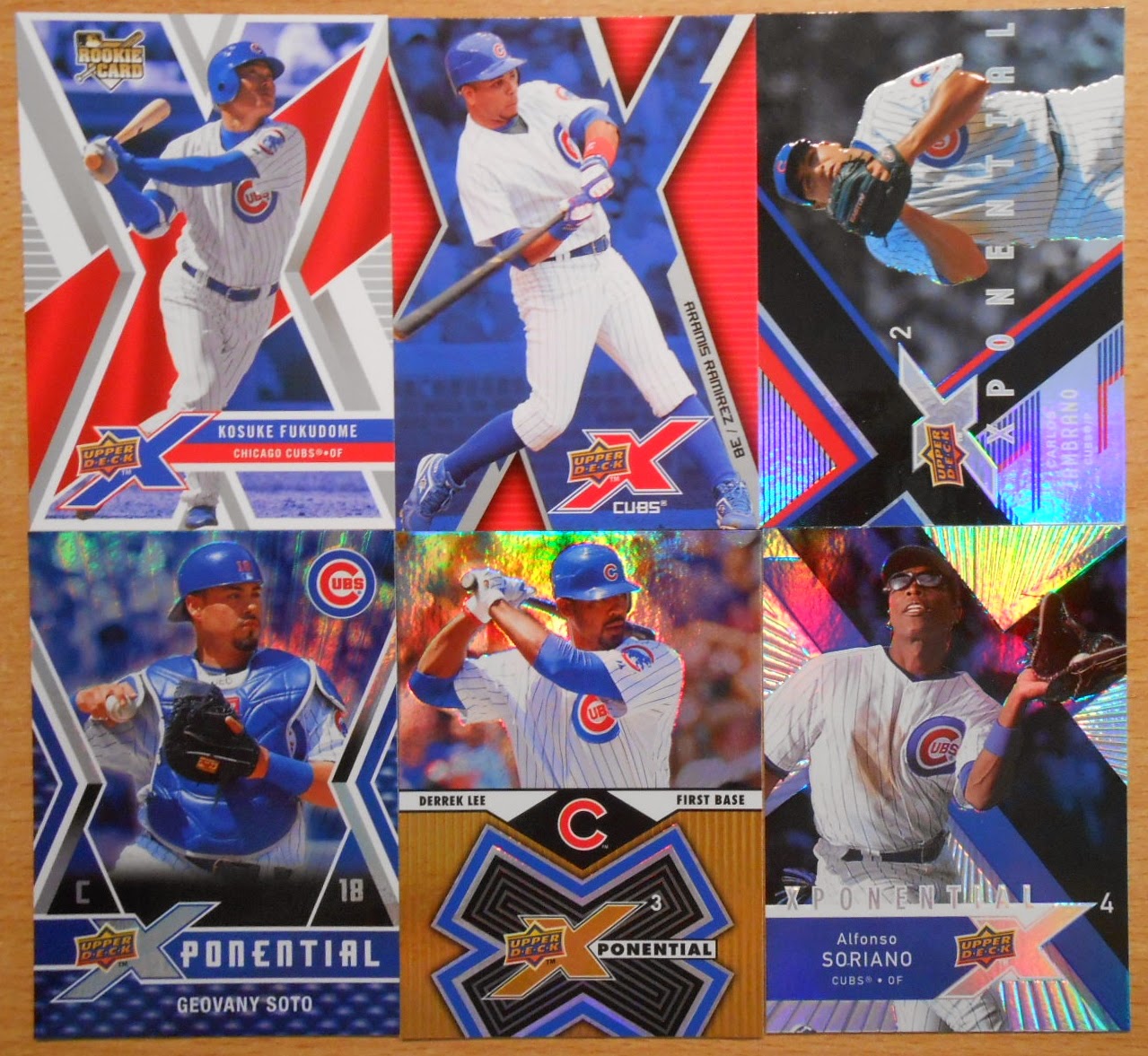 Above we have a bunch of Upper Deck from 2008 and 2009.  These half dozen cards are of the six players who represented the Cubs in the 2008 All-Star game.

Where are they now?
Derrek Lee is retired.
Carlos Zambrano is retired.
Alfonso Soriano was recently released by the Yankees and is contemplating retirement.
Fukudome is back in Japan and I last heard he was playing for the Hanshin Tigers.
Geovany Soto has yet to play in 2014 (injury) and he was recently arrested.
Aramis Ramirez, a 2014 All-Star, is the only player still enjoying success in the majors.

Wow, since that great 2008 season the Cubs have averaged 91 losses a year.  Ouch.  Well, if nothing else, the name of my blog is appropriate!

Next up we have a DLee die cut.  It's a little difficult to see, but the white space above Lee's helmet and also at the bottom of the card have perforations.  I believe the white spaces are not supposed to be there.  Huh.  Quality control fail? 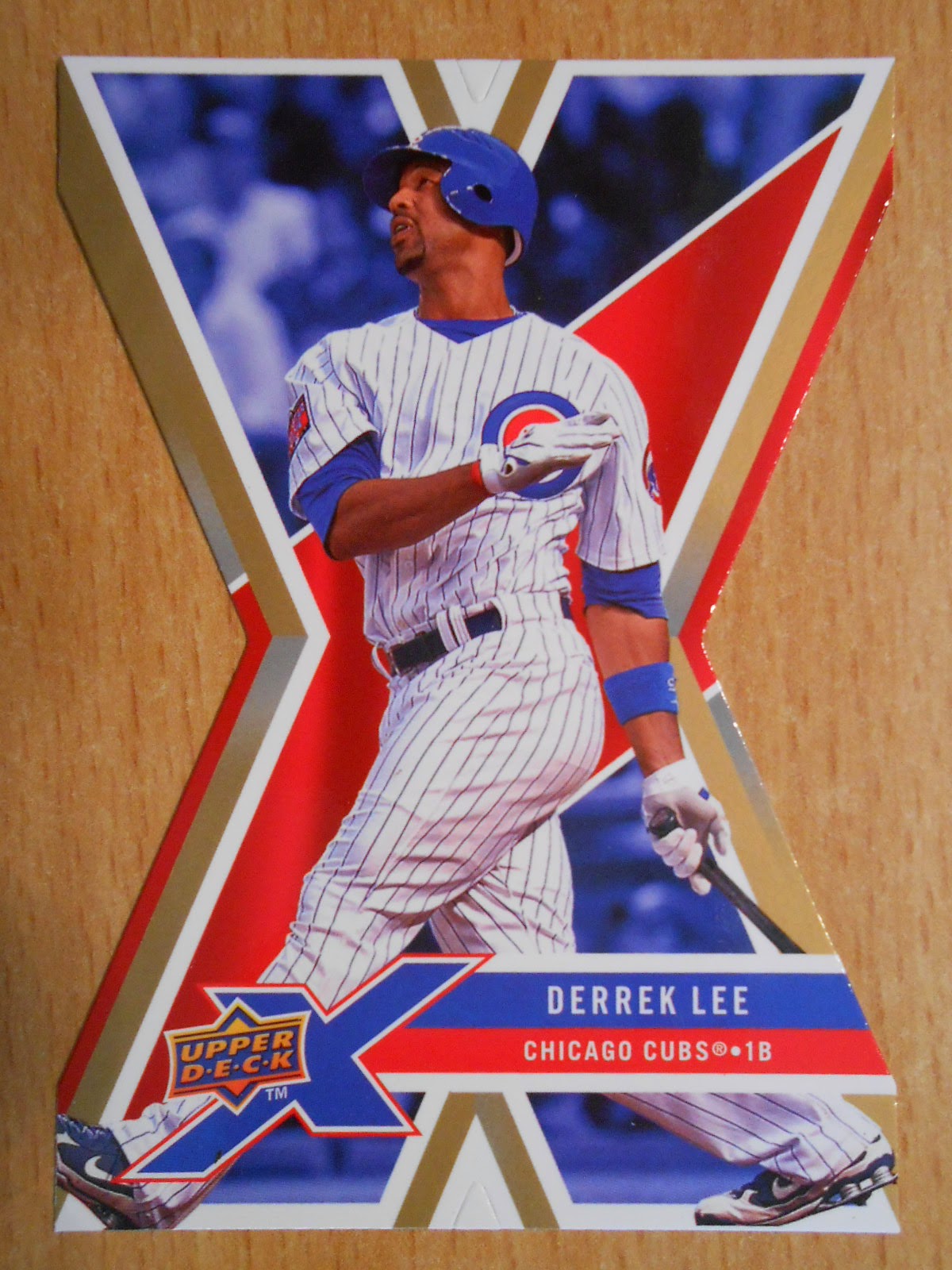 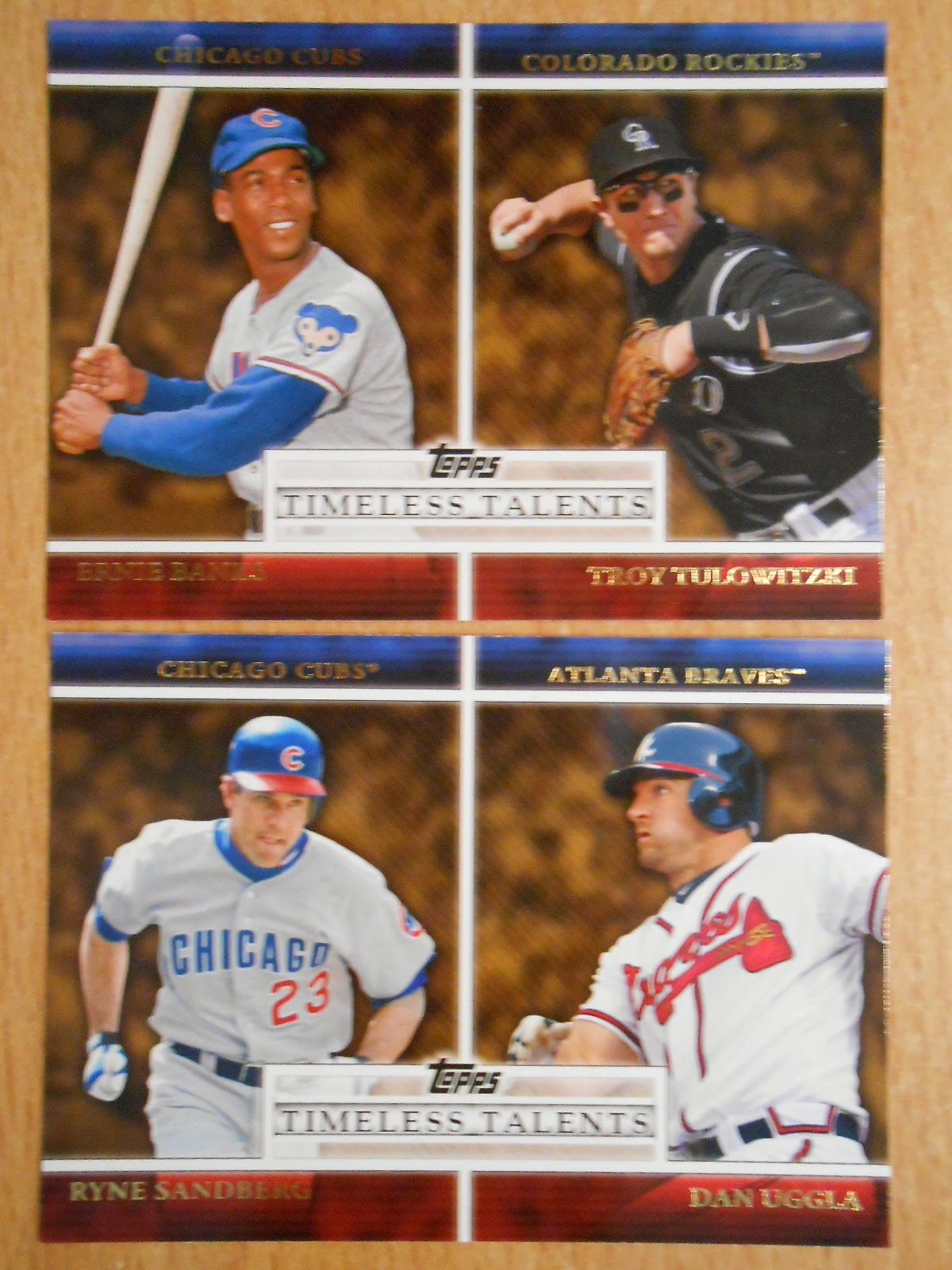 Dan Strailey.  Hey, welcome to the Cubs!  Have you been introduced to Mr. Bosio yet? 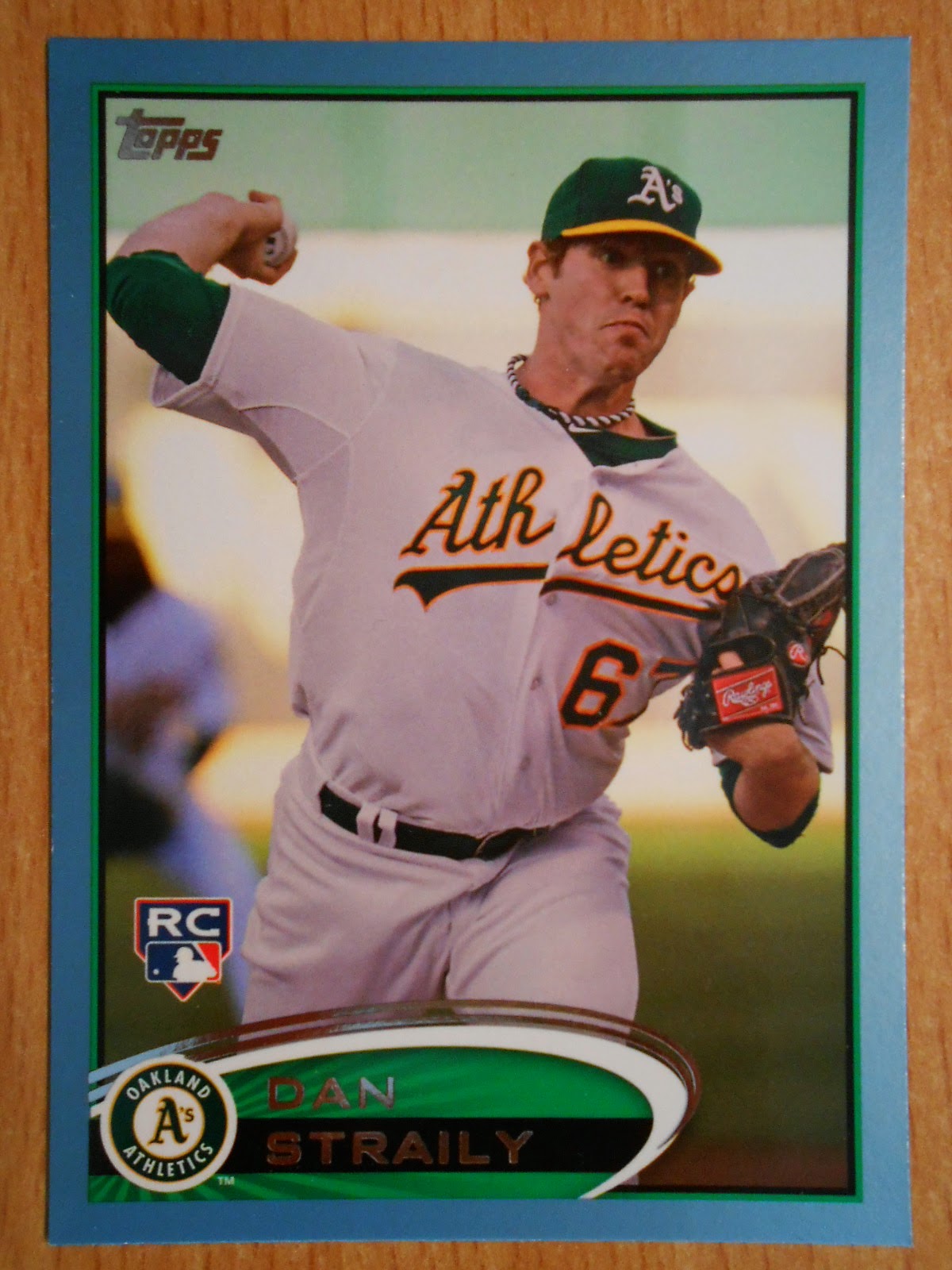 Jake Arrieta!  What an awesome card and I love the blue border on this 2014 Topps parallel. 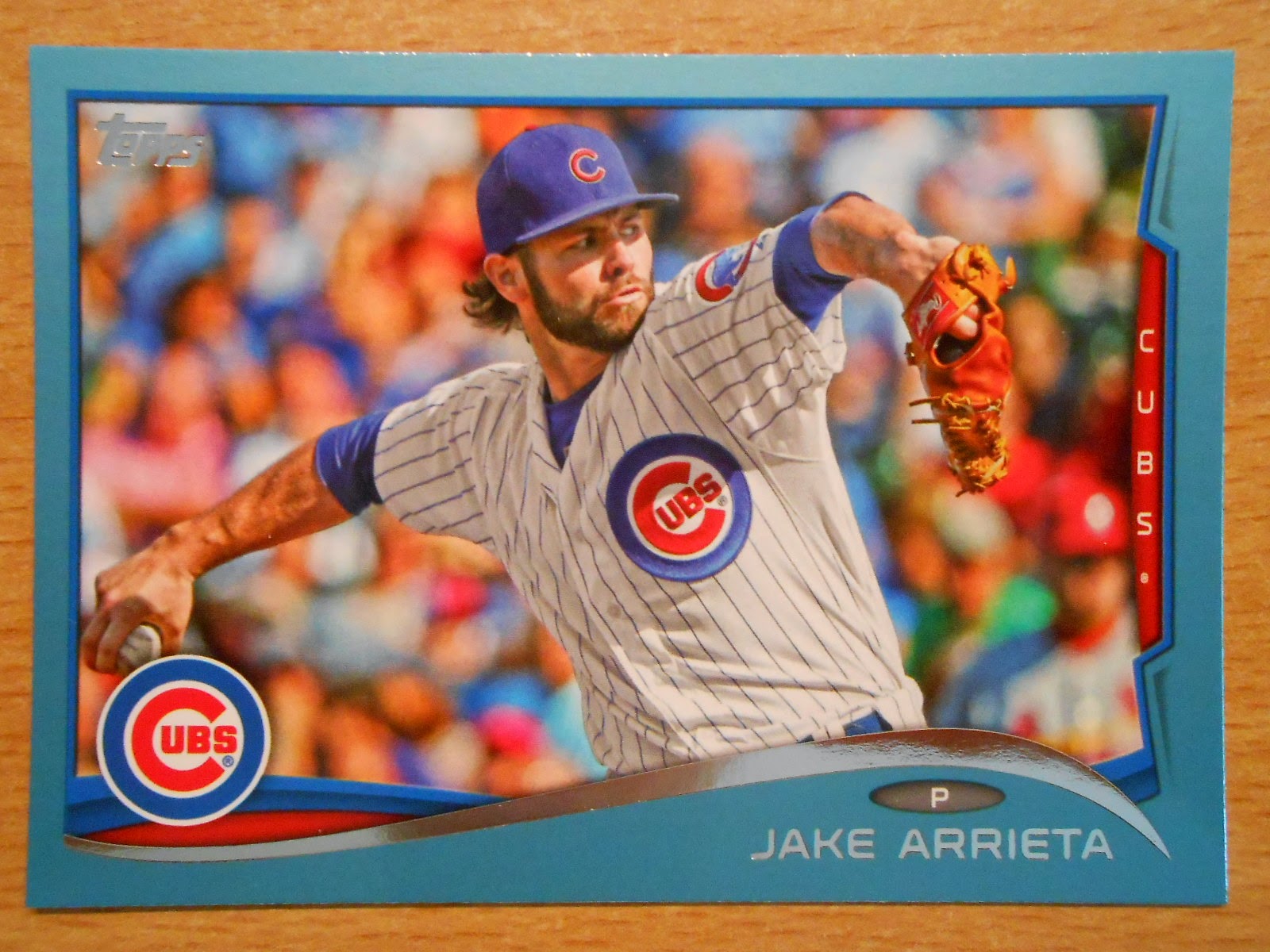 Don't tell my wife this, but I wish I could grow a beard like Jake.  Trimmed up and woodsman like.

And last, but not least, we have a 2001 Topps reprint of George Brett's rookie card. 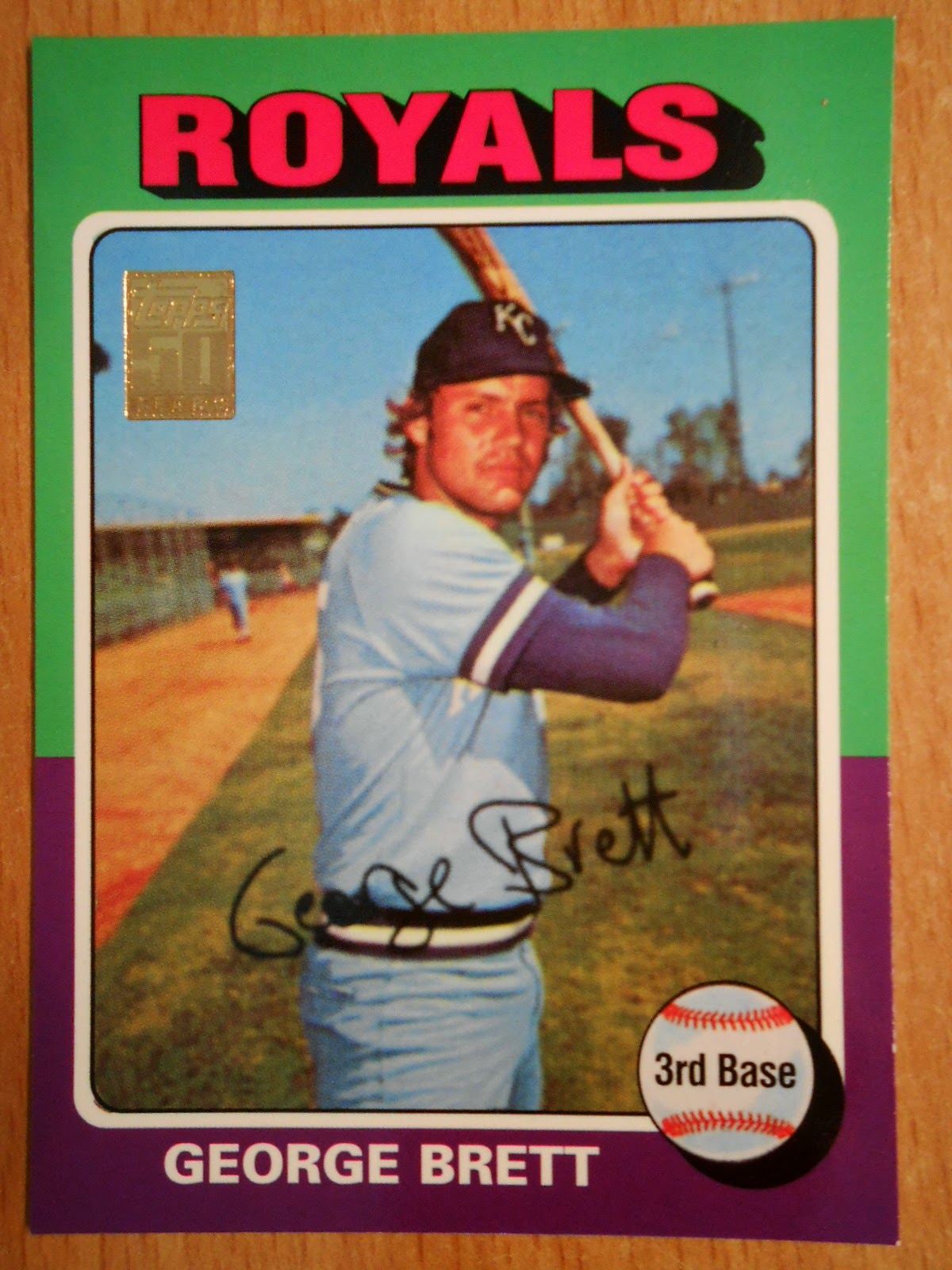 I'll never own an actually vintage Brett rookie, unless I find one like Nick's.  So reprints are the next best thing.

Thanks for a great trade, Tim!  For the record, I've been keeping track of all the trades I've made since I started my poorly named blog and Tim is now at the top of the list!  That and twenty bucks will buy you a blaster. Congrats!

For those of you wondering about the Colossos... a recap of Battle #4 will posted tomorrow morning.