The Blog is on Autopilot

I'm in the midst of well deserved vacation with Mrs. P-town Tom.  We were at the Cubs game in Pittsburgh last night and tonight we'll take in a Baltimore Orioles game.  My wife spoils me so!

Thankfully, I received a PWE from Nick before we hit the road.  How nice of Nick, he of the Dime Box ilk, to provide you guys with some cards to look at while we're on the road. 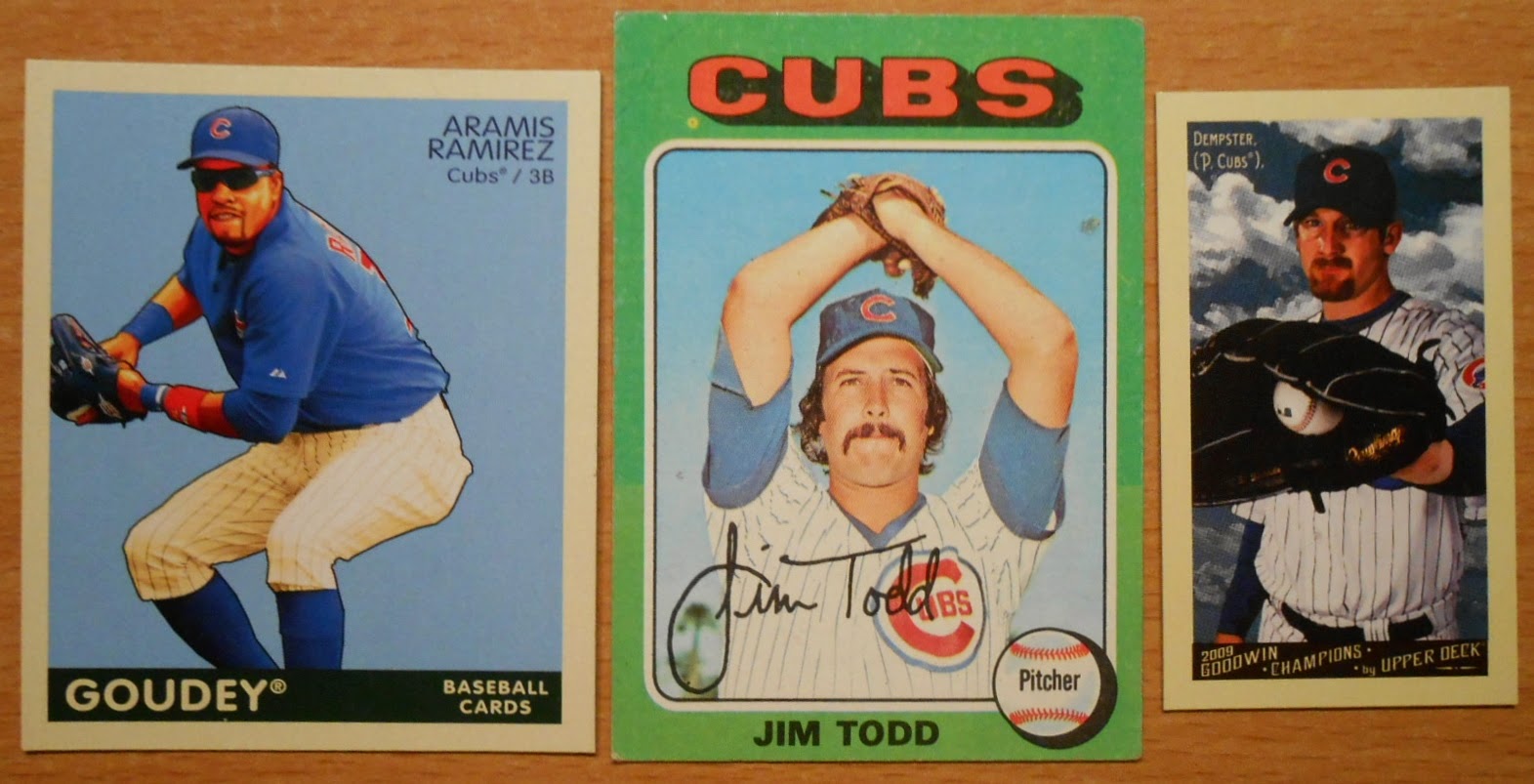 You can never go wrong with minis!

Speaking of never going wrong...  Vintage!  Only the Steve Stone is a dupe for the Cub collector. 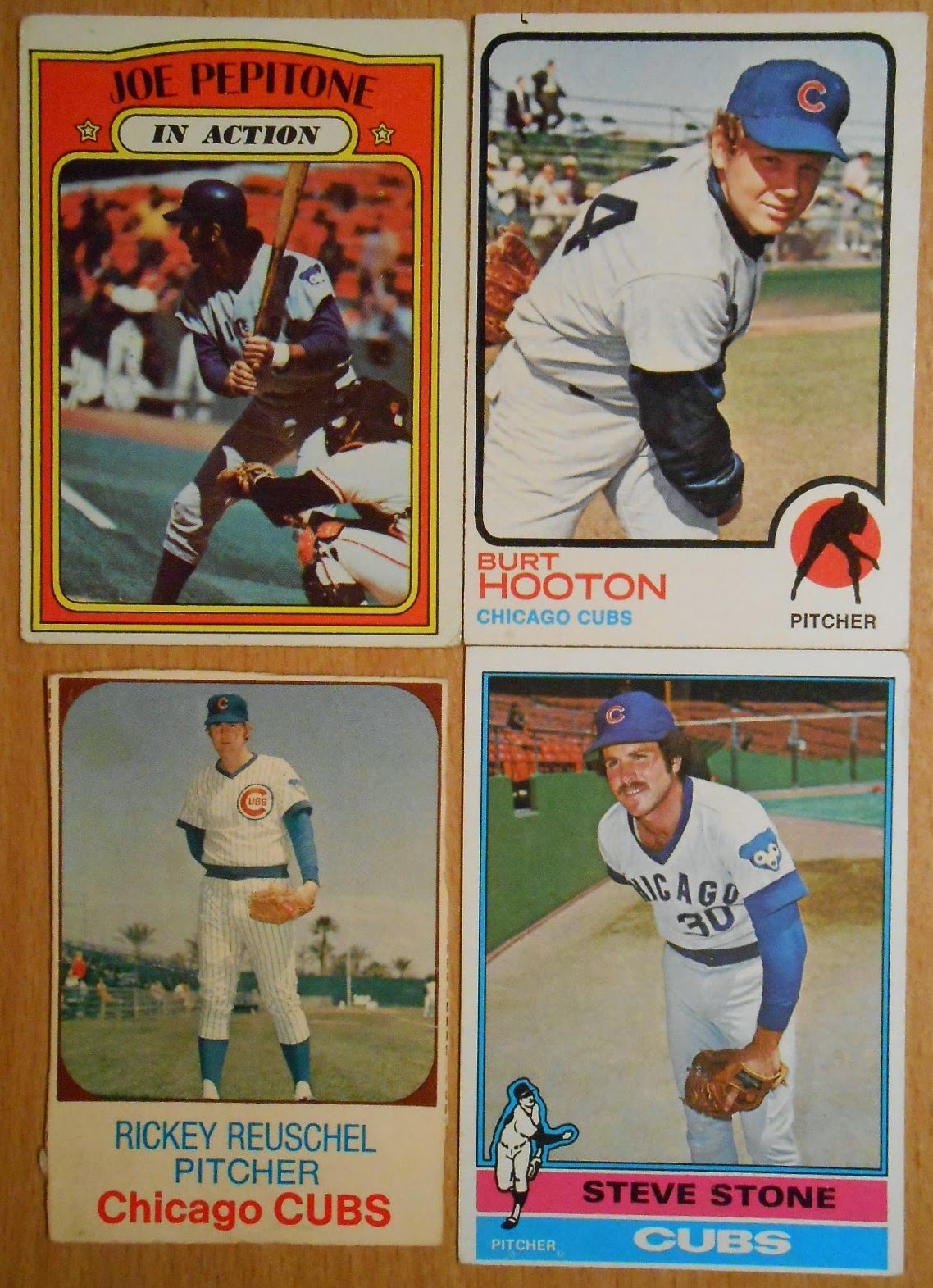 I've never seen the '72 In Action card of Joe Pepitone before.  Very nice.  I've run across the Hooton before, but I think it was on someone's blog.  Rickey Reuschel?  Rickey?  This card was produced in 1975, after Reuschel's third big league season, and I'm guessing he went by Rickey in his early days.  I'm not sure of the manufacturer, but from the dotted line on the right edge I'm going to guess it came off a cereal box.  Post, perhaps?

Parallels?  Holy cow, do we have parallels! 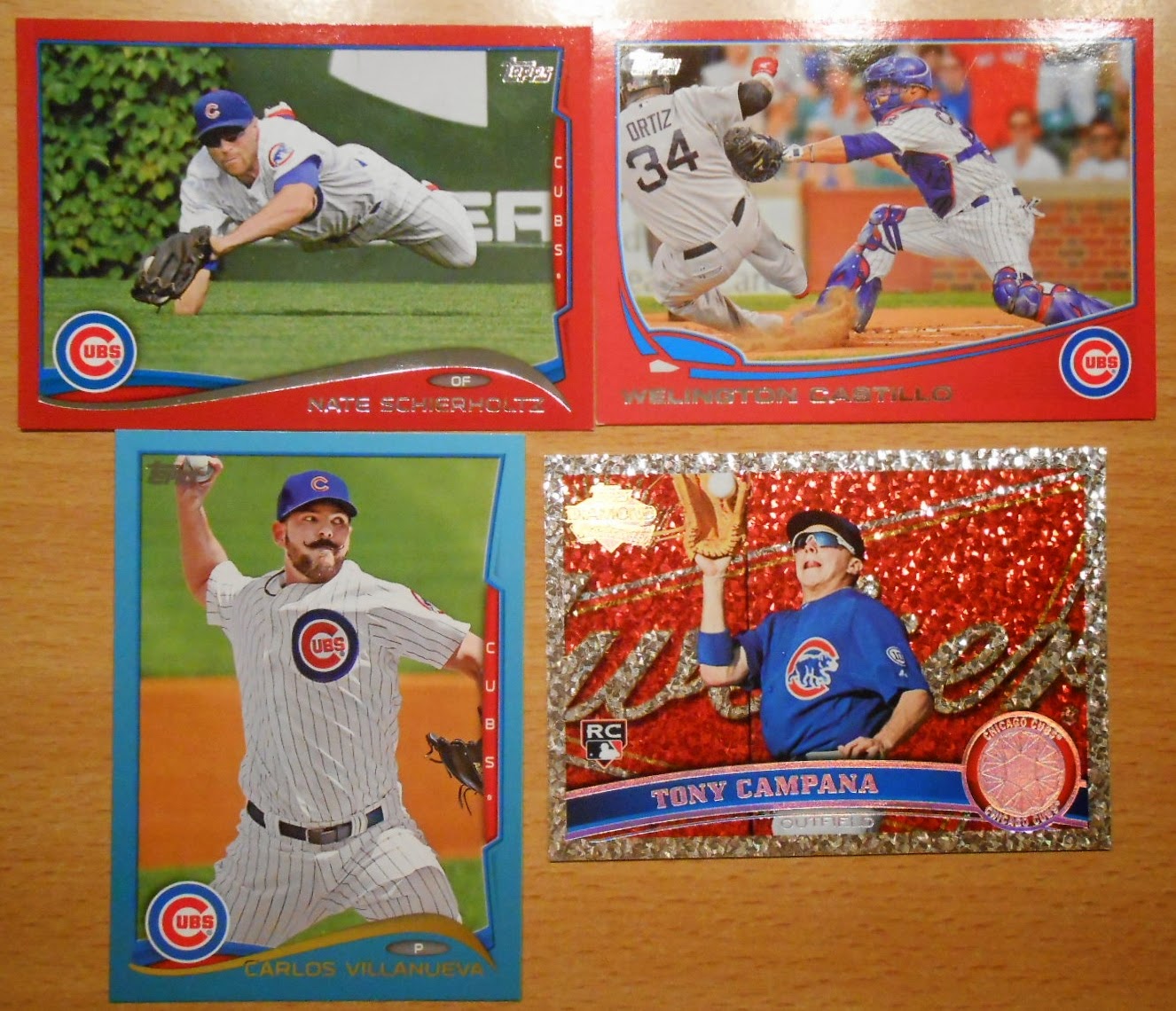 That's my first diamond parallel of Tony Campana's 2011 card.  Absolutely gorgeous!  I think the 2011 Topps set is probably my favorite of the century so far, and the sparkly parallels way heavily in my decision. 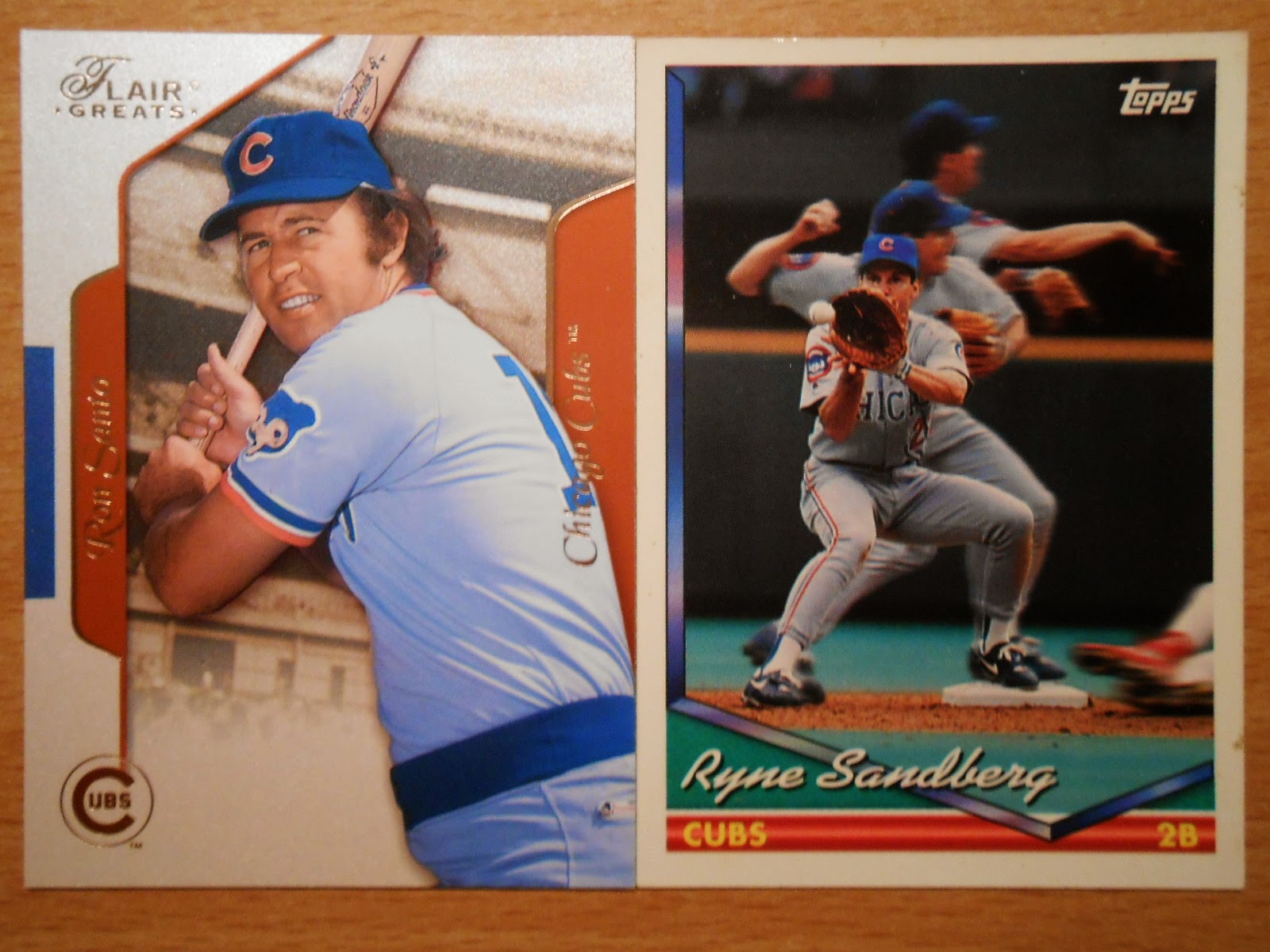 More specifically, a powder blue Ron Santo and a multi-exposure Ryne Sandberg.  I think this may be the second best double play Cub card on the market.  Number one?  I'm going with the flyin' Shawon. 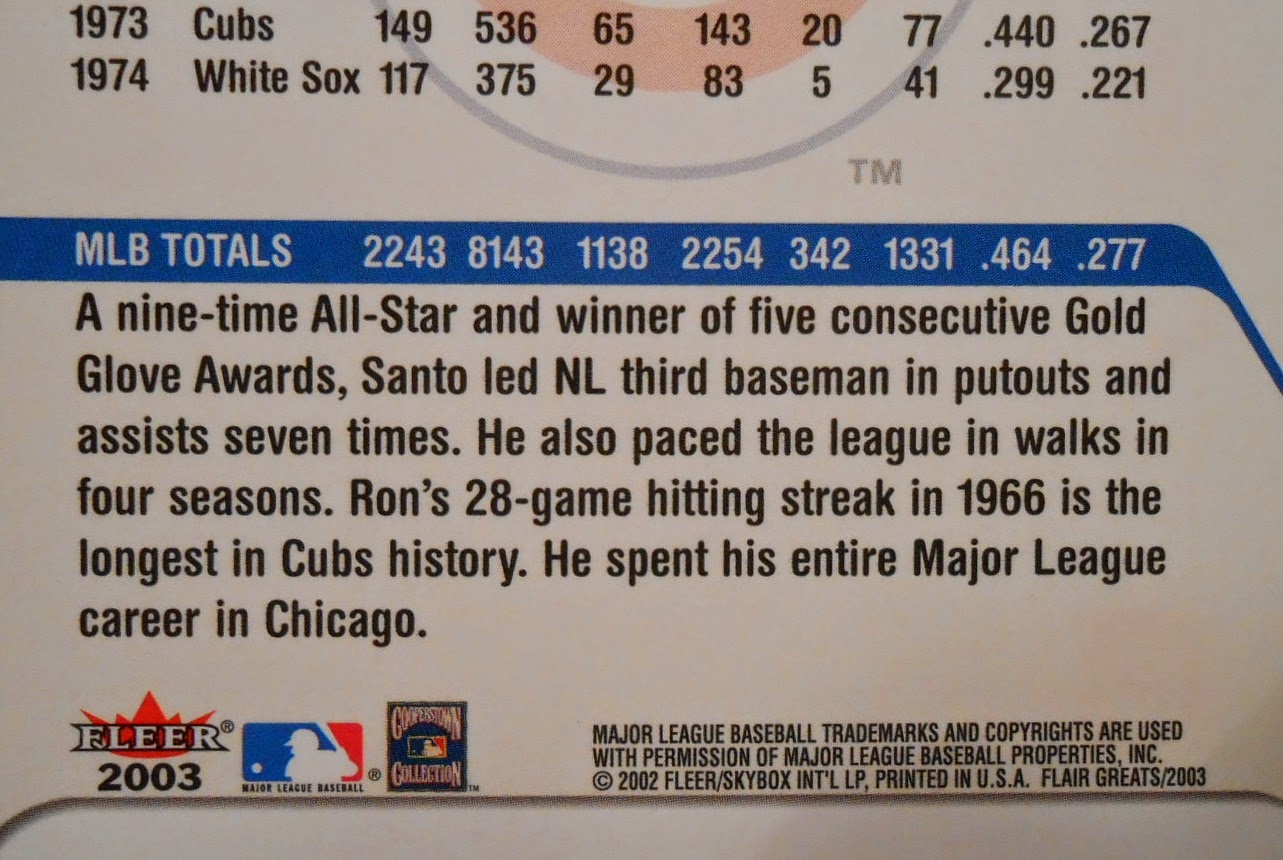 What did I find on the back?  A simple oversight.  The back should read, "Ron's 28-game hitting streak in 1966 was the longest in Cubs history until Jerome Walton reached 30 games as a rookie in 1989."  I fell in love with the Cubs that magical summer and I have to give Juice his due!

What a great assortment of cards in a single PWE!

In a recent post Nick answered the question, "What do I collect?" In short, his response was, "My collection is all over he place."