A Stack of Cubs Courtesy of Chipp 'n' Dale

Earlier this spring I found my collection of 2012 Panini Triple Play cards had grown out of control so I searched for want lists pertaining to this set and ran across Chipp 'n' Dale.  James is the curator of this Braves-centric blog and much to my delight I was able to package up and ship off 175+ cards from the aforementioned set.

I was floored by James' generosity when his trade package arrived.  Let's take a look! 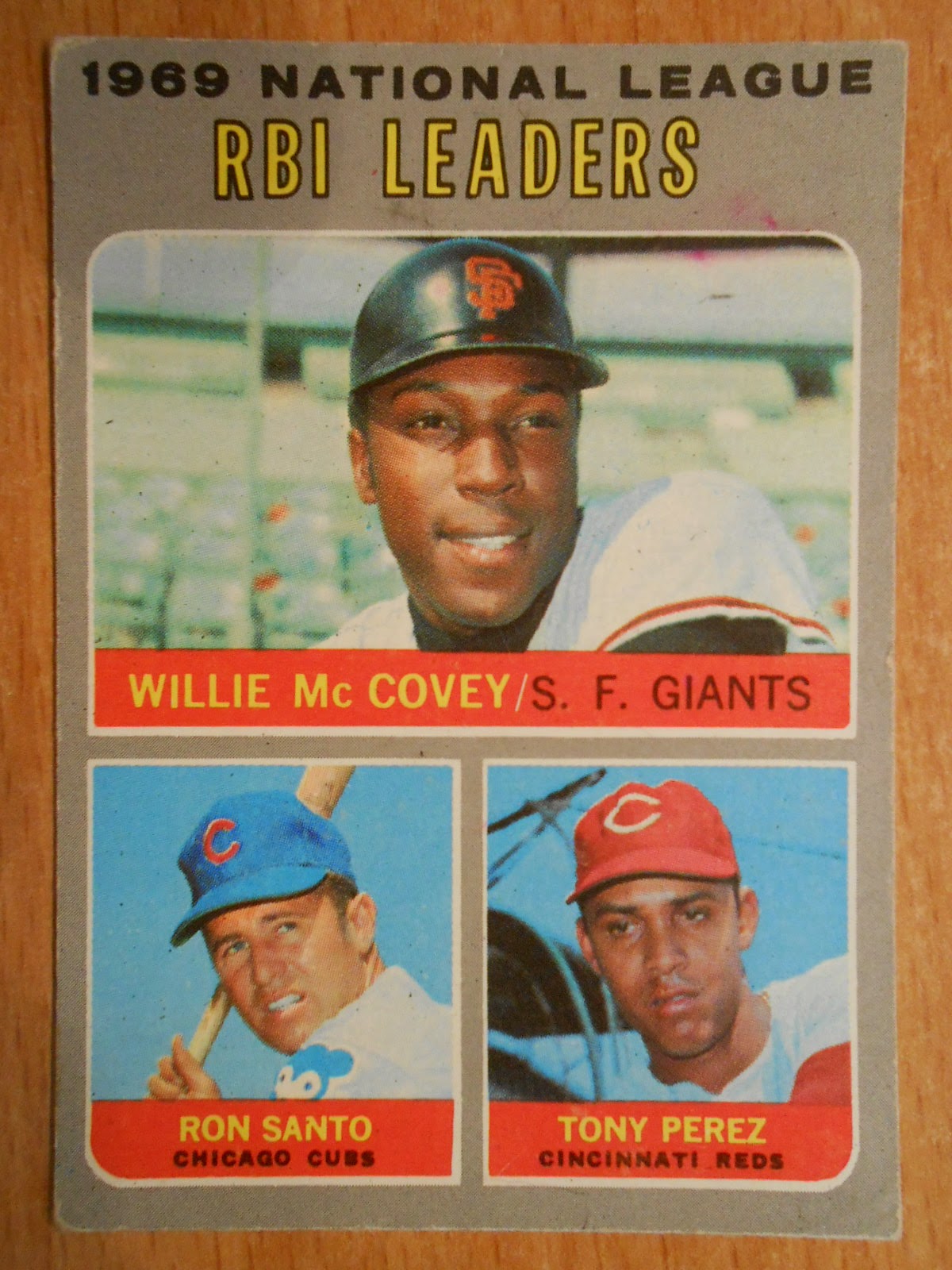 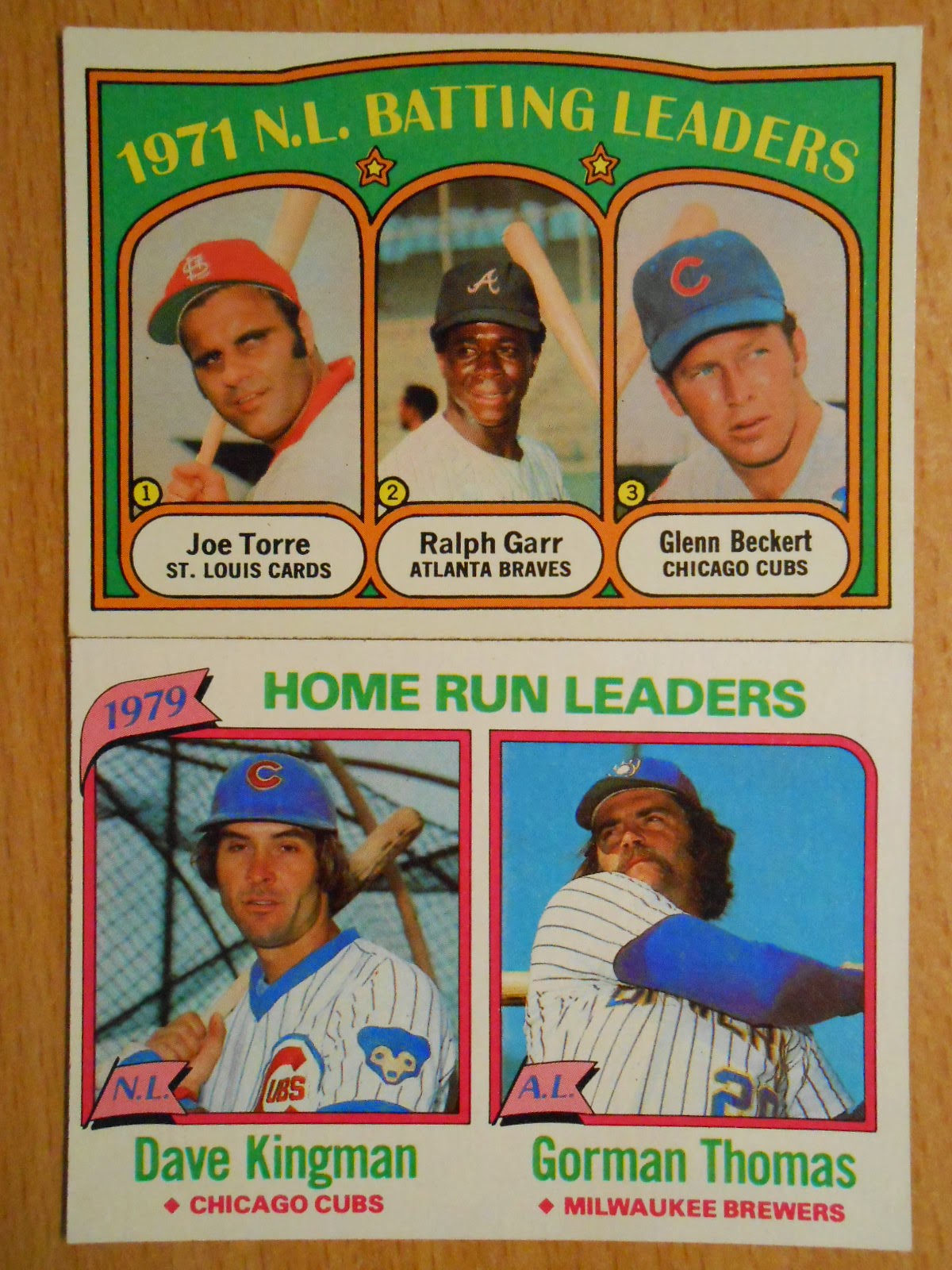 Holy smokes!  Vintage!  Vintage for 2012 Triple Play?  Um, sign me up!  James, I have another 600 Triple Play cards or so if you have more vintage you would like to get rid of!

Young Bruce Sutter... nice.  My only copy of the '78 Sutter had to go in my '78 set, so I was pretty stoked to have another one to place in my Cubs binder.  The 1980 card with Sutter sportin' the powder blue uniforms with white pinstripes is just magnificent.  I really like how Sutter's leg kick is nearly parallel to the two banners AND his autograph. 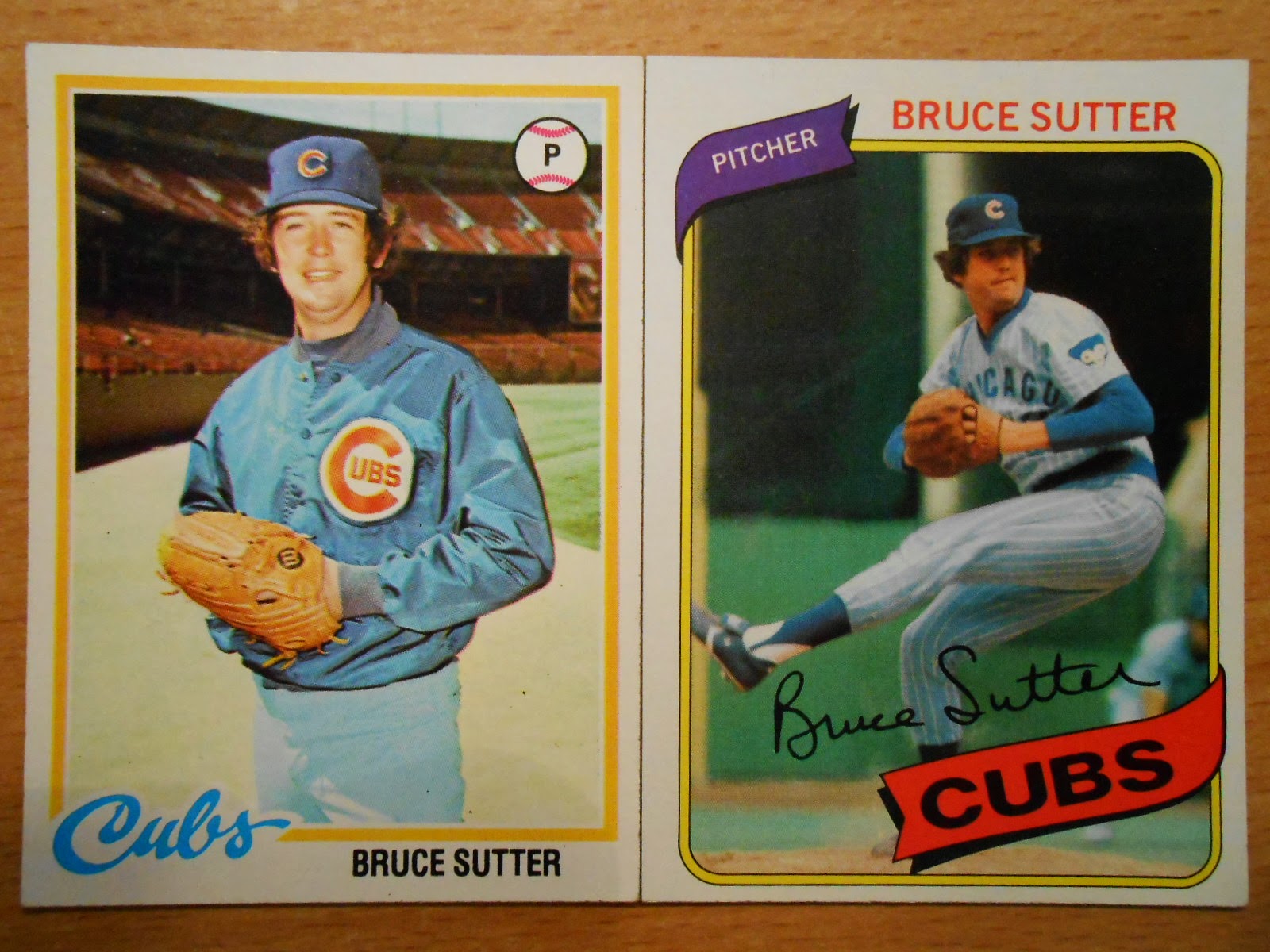 Here we have two of my favorite boys from the 1969 team: Don Kessinger and Glenn Beckert.  I have mini collections of both players and these will make fantastic additions. 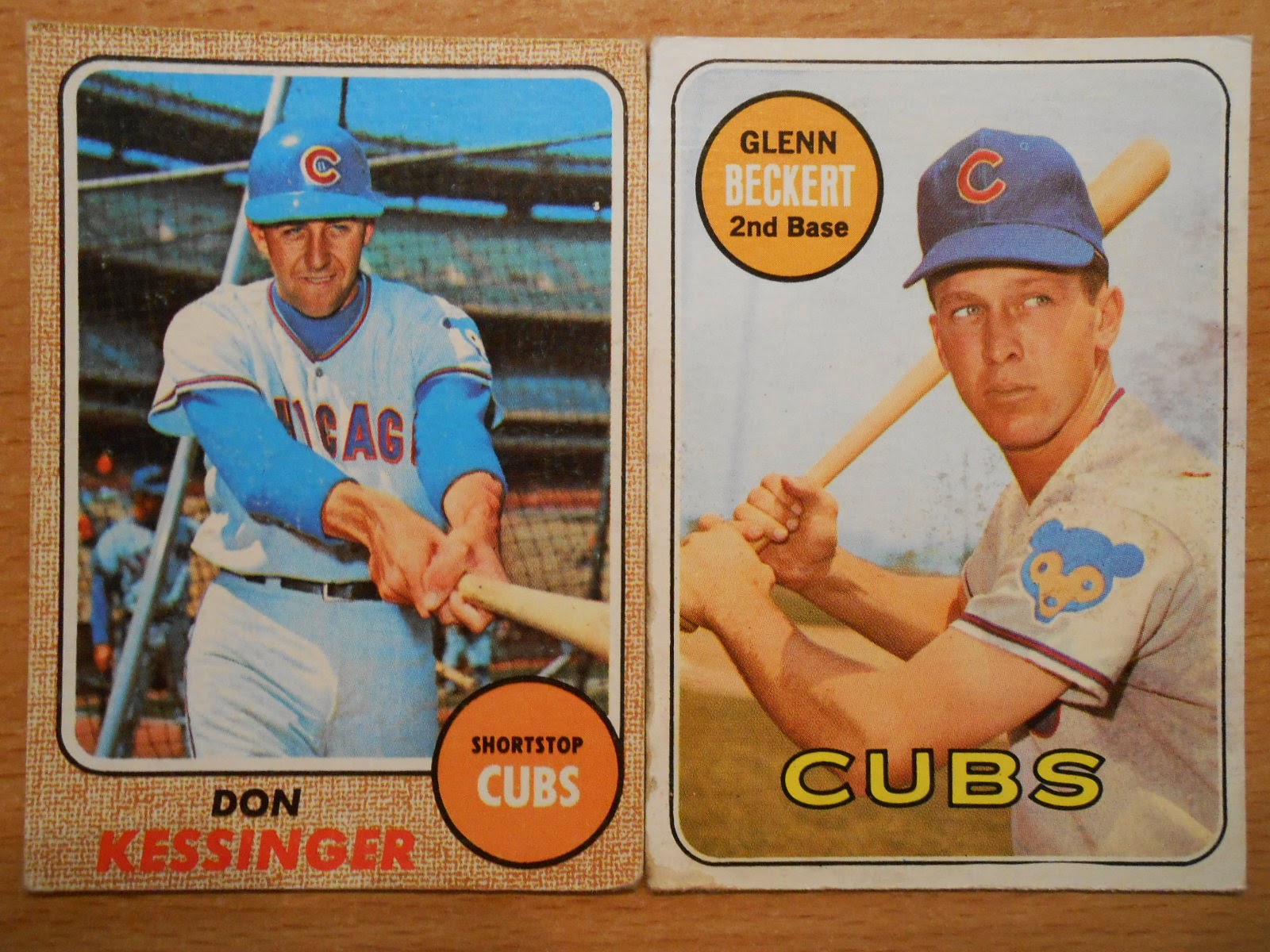 As far as my player collections go all of the following were hits: 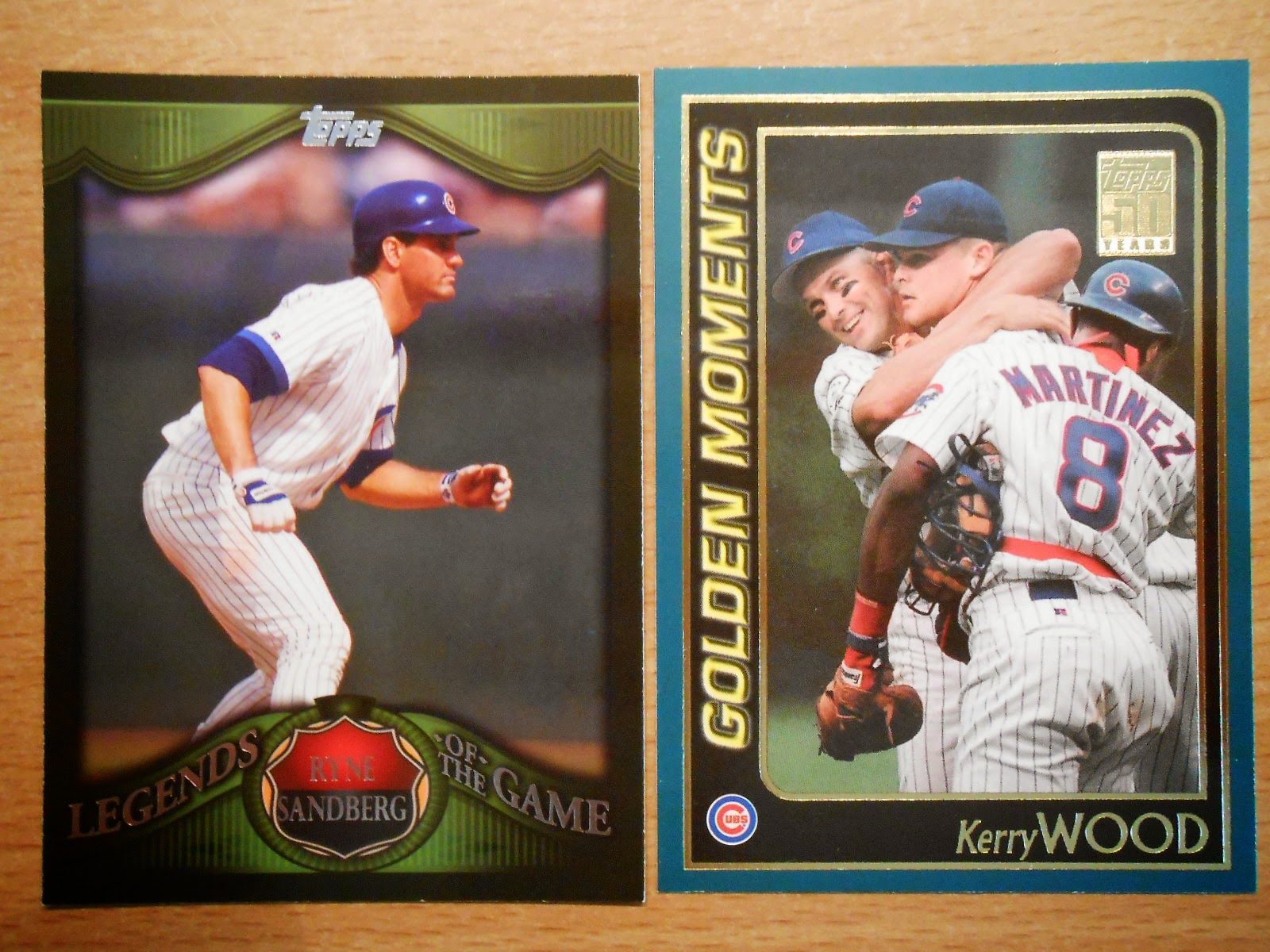 Can Ryne be a legend if he retired less than a score ago?  In my opinion it's way too early to call him a legend.  I think I have mentioned this before, but the 2001 Golden Moments card of Kerry Wood is one of my favorites.

Glenallen Hill seemed to one bad dude when he played for the Cubs, but in the fierce competitor way, not in the PR nightmare way.  Fujikawa is a guy I got behind early and he's getting some love in the 2014 sets, which I don't quite understand.  Hopefully, he'll truly merit a card before too long. 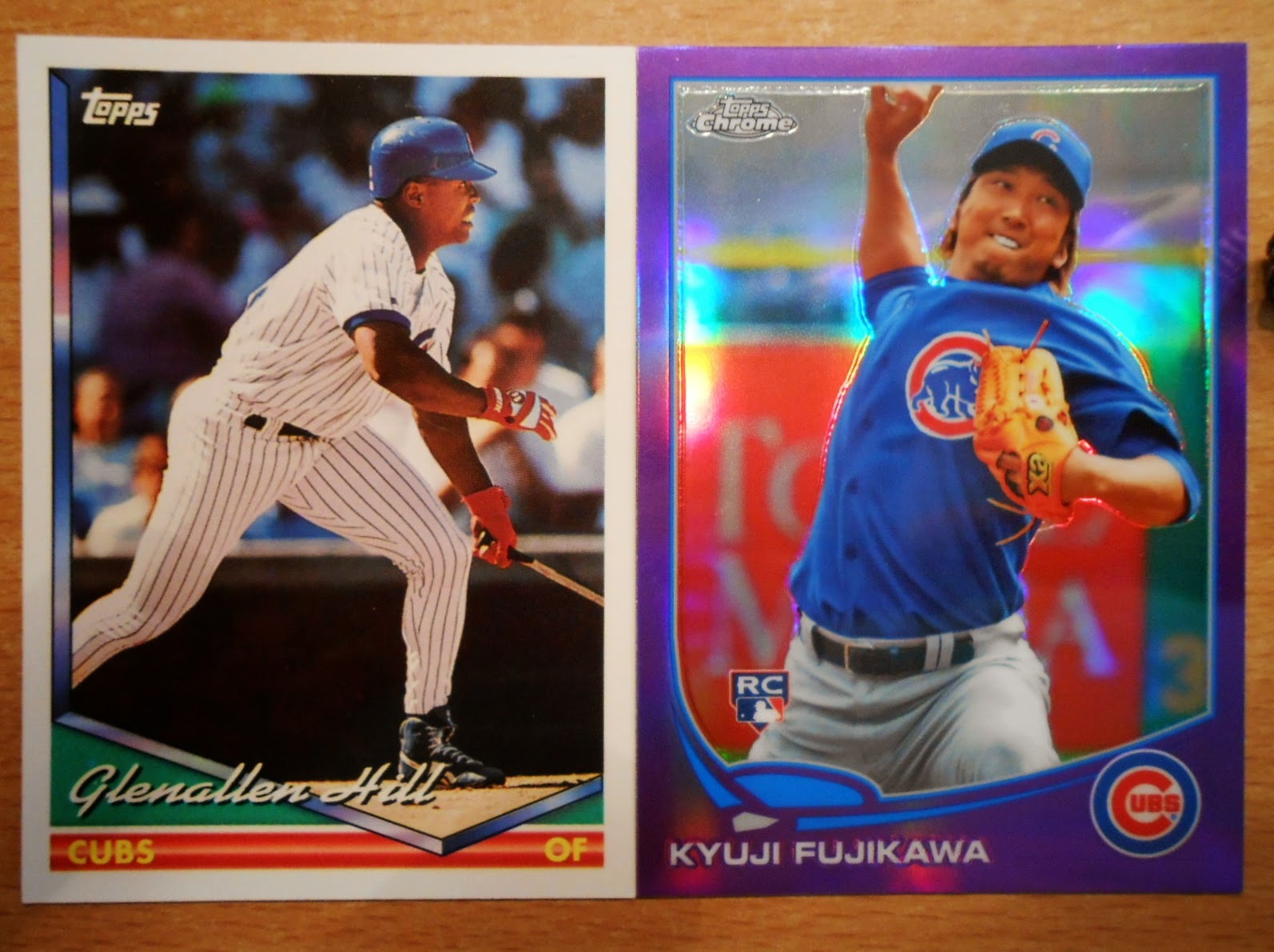 A Ryno coin and a mini sticker card of Wild Thing.  A Ryno and a Wild Thing.  I'm sure there's a pun there somewhere I'm missing. 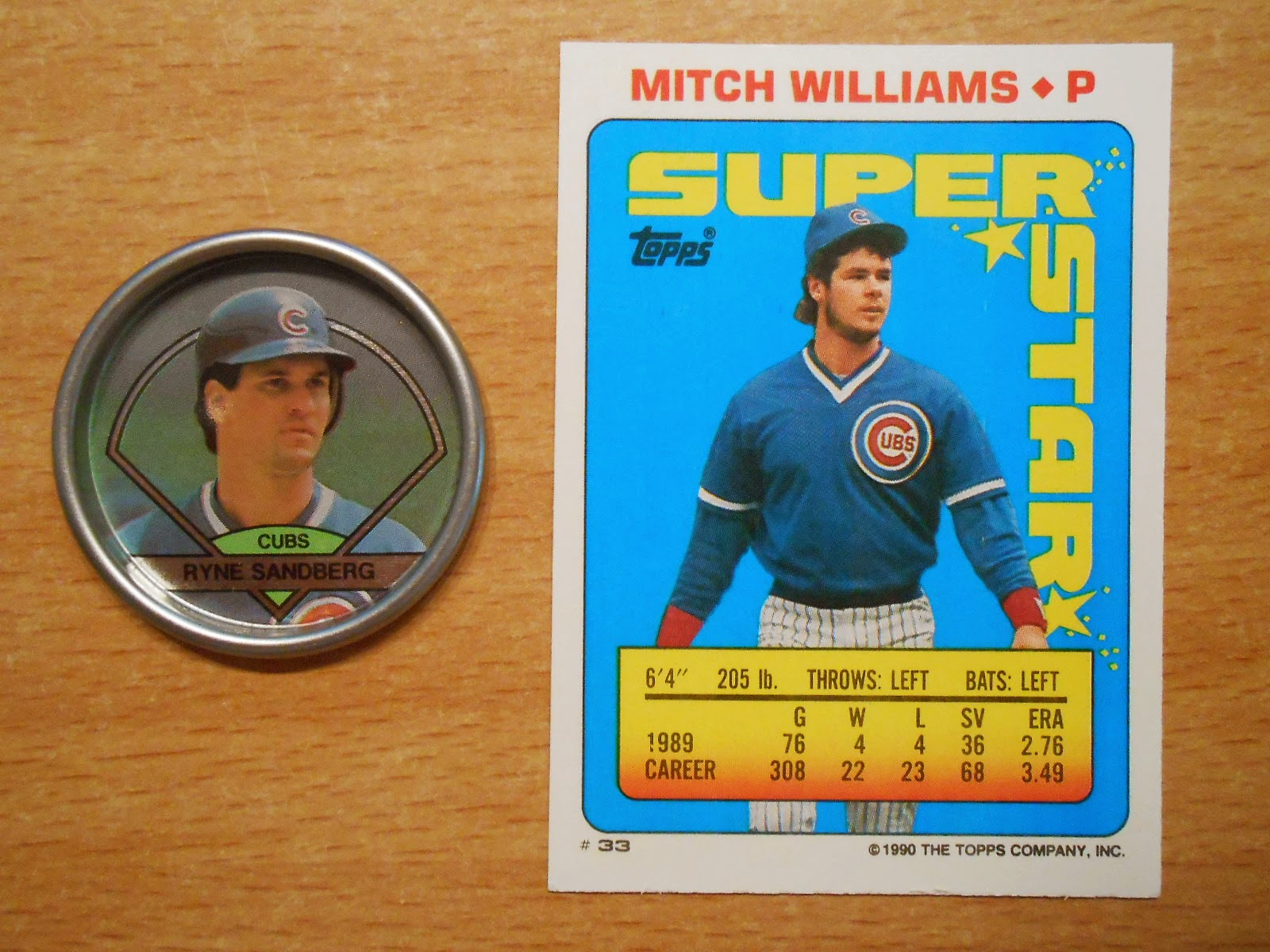 Other favorites and why: EY because of his smile, Henry Rodriguez because he reminds of "Oh Henry!" candy bars, Bob Dernier because a friend of mine knows him personally, and Ryan Dempster because he's such a cut-up.  The Hawk?  No explanation necessary in my mind.  He's The Hawk! 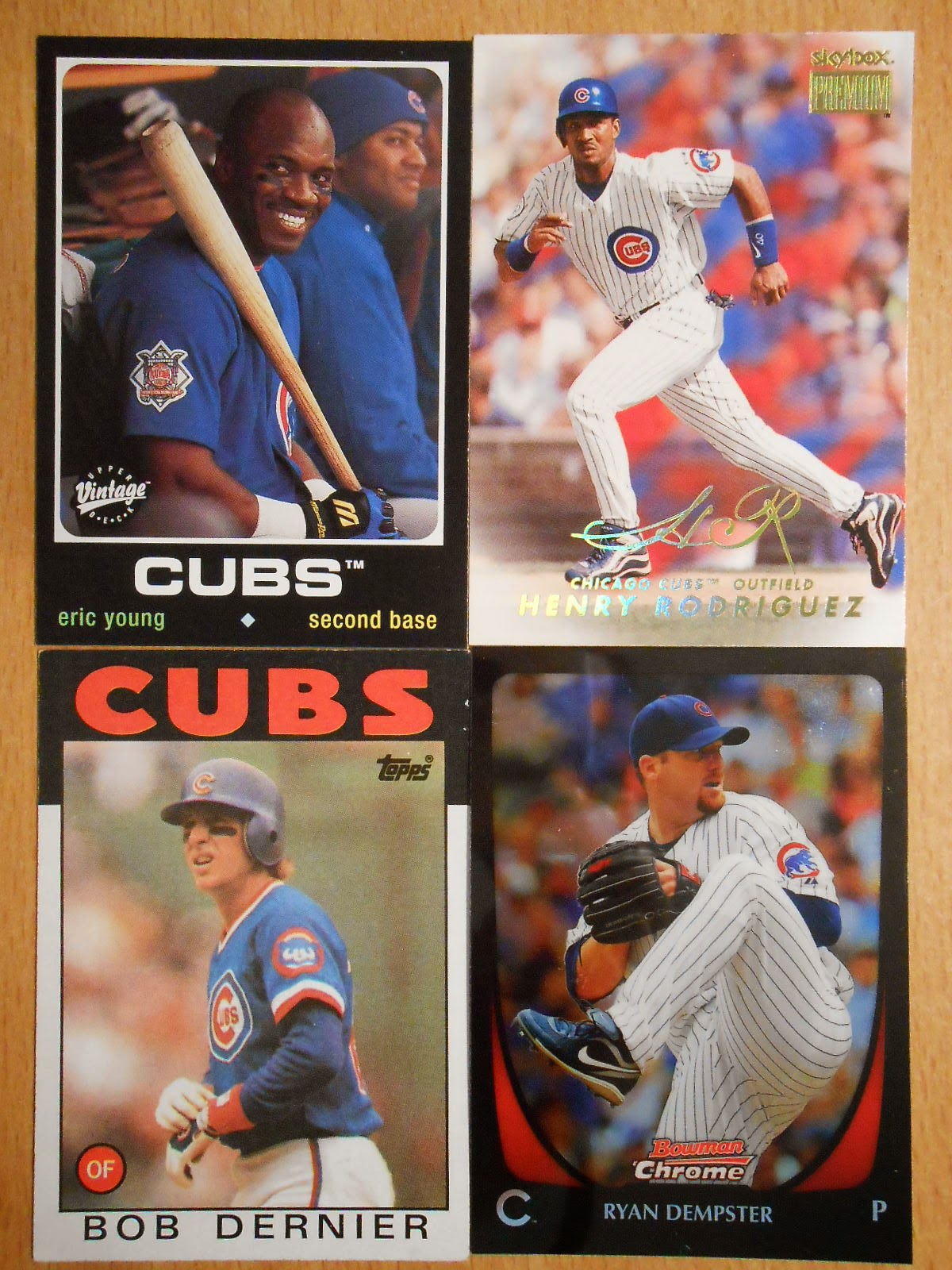 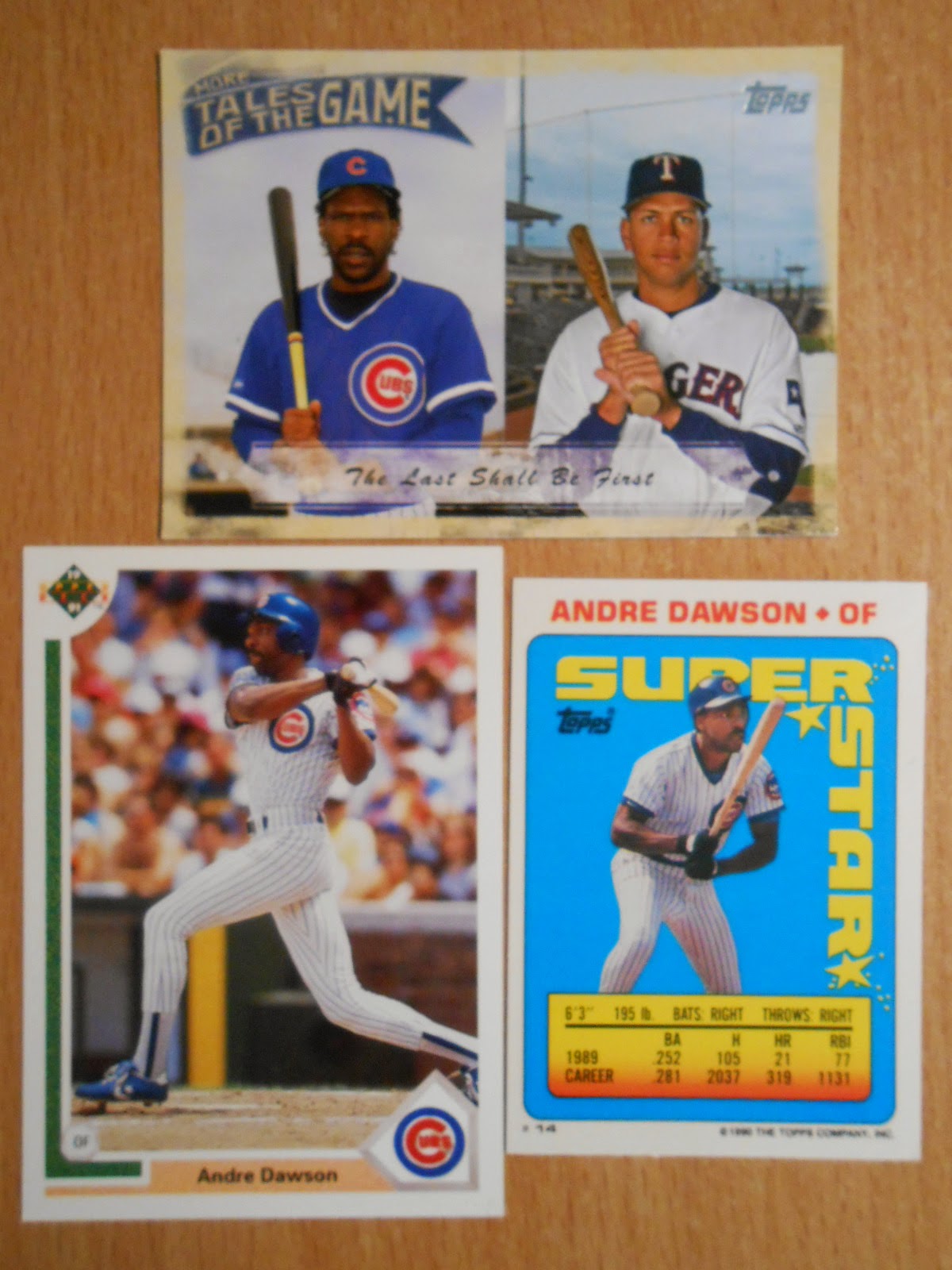 Lastly, two of the prospects I'm hoping will pan out in the near future: Arismendy Alcantara and Junior Lake. 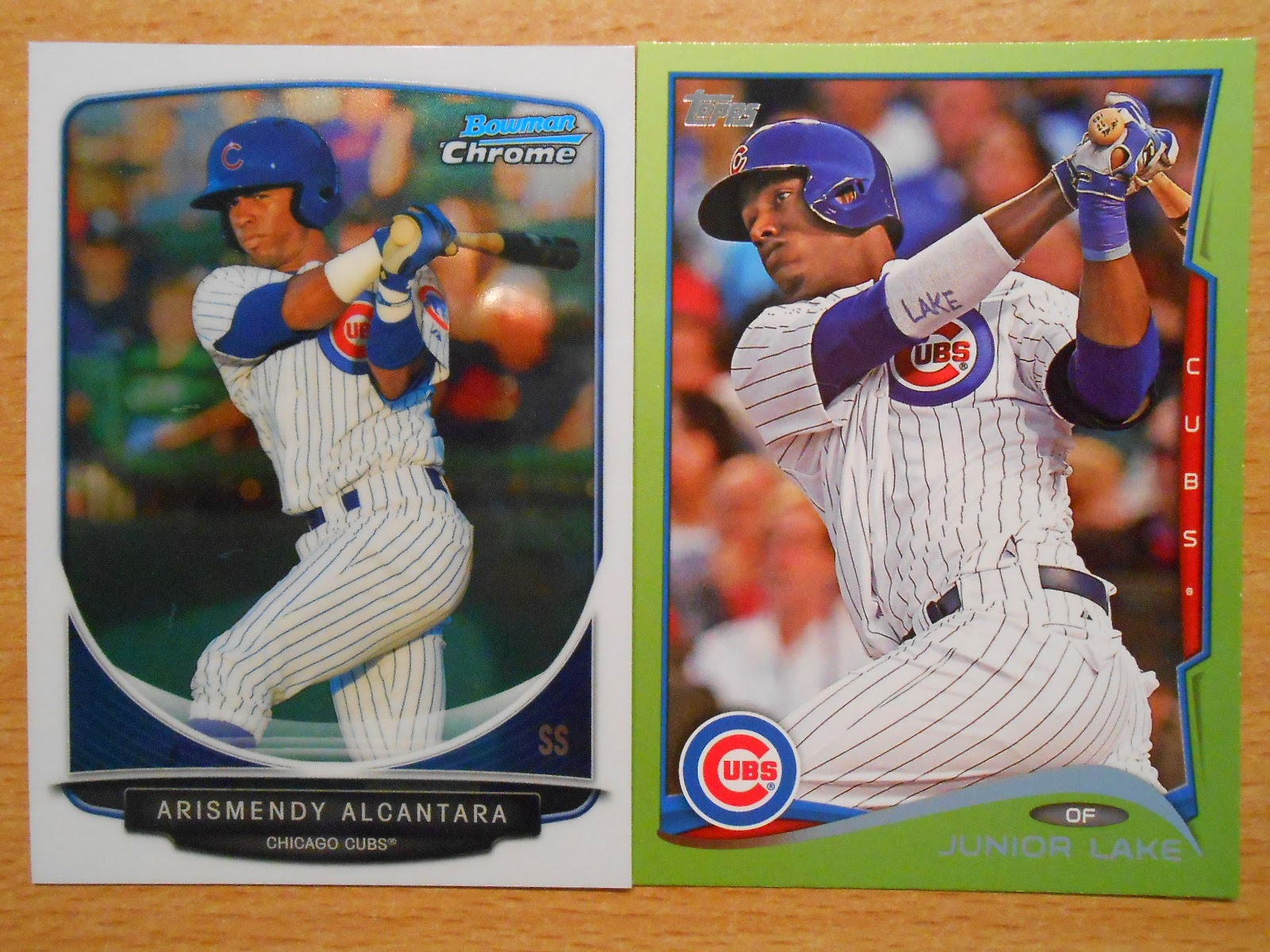 Am I the only one who wish Topps would take a chance and make the flagship product in 2015 with a non-white border?  I don't know that lime green would do the trick, but something with color would be a pleasant change.  If they really want to go crazy and set the collecting world on its ear, then Topps could make white bordered parallels.  Wouldn't that be something?

James, this was a stellar return package!  Thanks so much for the cards!