This page has been a struggle. As you can see it starts off with the only two members of the well known 2005 class and then we start the madness of 2006. A Special Committee for the Negro Leagues (SCNL) was constructed and twelve players from the Negro Leagues were joined by Bruce Sutter to form the largest induction class ever.

Gavin came to my rescue with his "Neglected Hall of Famer" set, which is seen four times on this page. I still have to track down a Biz Mackey card and I have a couple of leads . . . I just struggle paying north of $4 in shipping and handling for one card. (I'm looking at you, Beckett Marketplace!) 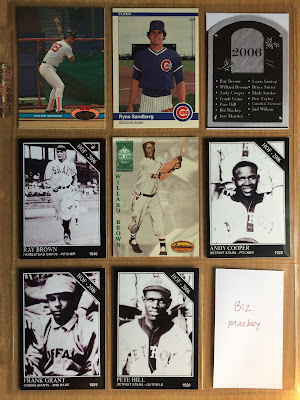 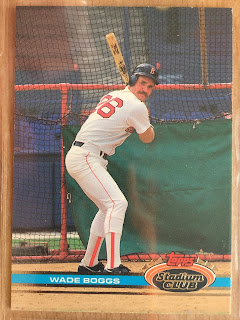 Wade "Chicken Man" Boggs is probably one of the Top 5 contact hitters I've seen play. Here's a short list of Boggs accolades: 12 All-Star elections, five batting titles and a World Series Championship in 1996 with the Yankees. I have a question for you though. As a rookie in 1982 Boggs hit 0.349 in 104 games and he finished third in the Rookie of the Year voting. Obviously, he put himself on the map. How in the world did he not get elected to the All-Star Game in 1983? He was on his way to a 200 hit season and 0.361 average, which topped both leagues by more than twenty points! I was only six at the time, so if you could shed some light on that oversight I would gladly appreciate it. 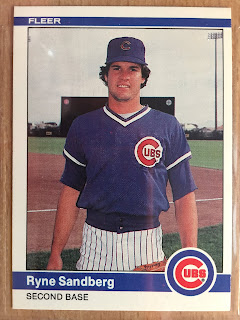 Ryne Sandberg was my guy during my first time through the hobby. Currently I have 931 different cards of his in my collection, but over two-thirds of those came to me during my teenage years. Ryno was awarded seven Silver Sluggers, nine Gold Gloves, and was in ten All-Star Games. In 1984 he helped the Cubs earn a trip to the playoffs for the first time in four decades by putting together an MVP season, in which he swatted 19 homers and 19 triples, stole 32 bases and batted a cool 0.314. 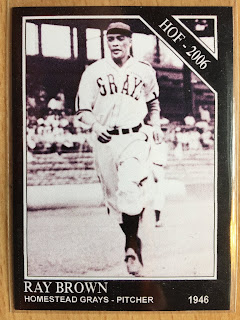 Ray Brown is near the top of the all-time leaders in Negro League history in wins, winning percentage, strikeouts and shutouts. He was known for his overhand curveball and was called a "Sunday Pitcher" because that's when teams would throw their best to draw the biggest paying crowds. 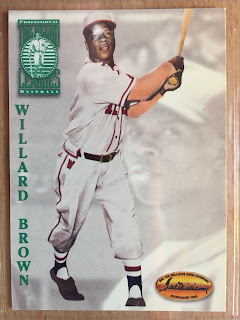 Willard Brown was a free swinging center fielder whose batting average regularly topped 0.300. He was elected to eight East-West All-Stars and helped the Kansas City Monarchs to six pennants in a ten year span. Brown won two Triple Crowns in the Puerto Rican League and he was the first African American to homer in the American League when he did so with the St. Louis Browns in 1947. 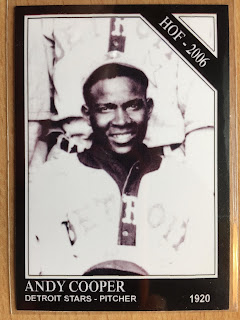 Andy "Lefty" Cooper ranks near or at the top in nearly every career pitching category. He was known for his wide array of off-speed pitches, which kept opposing hitters off balanced, and also for pitching in relief on the days between starts. Cooper was once traded to the Kansas City Monarchs for five players, which paid off for KC as they would later win a championship with Cooper at the top of their rotation. 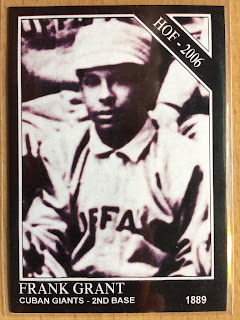 Frank Grant began his playing career before the Negro Leagues had formed and he starred within the integrated minor leagues. He was known as a slick fielder who had decent power for someone of shorter stature. Later, when the minors became segregated, he finished his career in the Cuban League where he mentored younger players. 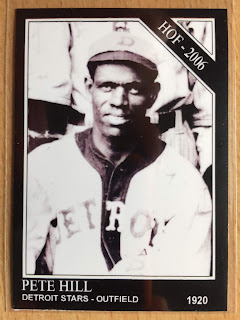 Pete Hill, like Grant, started his career pre-Negro Leagues. He played from 1899-1925, with his last six years being with the Detroit Stars and the Baltimore Black Sox of the Negro Leagues. A speedy center fielder, Hill was known for distracting infielders, catchers and pitchers with his base running antics. Hill was a complete player and many claimed he was one of the three best out fielders of the 1910's, with Ty Cobb and Tris Speaker.

No Card -- Biz Mackey
Biz Mackey was a true leader and the best defensive catcher in the Negro Leagues. He was said to have taught Roy Campanella the art of catching. Mackey was a consistent 0.300 hitter who could play all the other positions with skill. At the end of his playing days Mackey became a player-manager and he had five future Hall of Famers play for him while at Newark.


I'm a Sandberg fan at heart, but I can't pick his card as my favorite on this page. I love Gavin's work with his customs and how they look identical to the Conlon Collection. I wish there were better photos out there of these players, but a couple of them played more than a century ago and the picture selection has to be quite limited. I think the Ray Brown card is my favorite, because it's an action shot. Wade Boggs in a batting tunnel seems only fitting and I would choose that as my second favorite on the page. How about you? Would you choose one of the customs, too?

That's it for this week. Maybe if I find a little time I'll pull the trigger on a Biz Mackey card. You never know!