Today we'll finished off the entire 2000 and 2001 Hall of Fame classes in the same post. Unfortunately, there's only five cards to show off this week as I'm still on the hunt for cards featuring the likenesses of Bid McPhee, Turkey Stearnes and Hilton Smith.

Here's a look at the page with the less-than-glorious placeholders. Ugh. 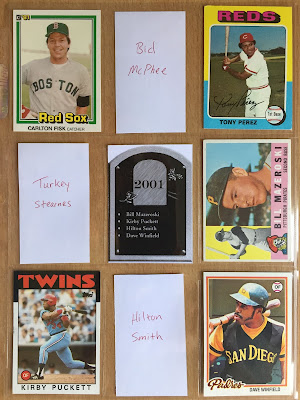 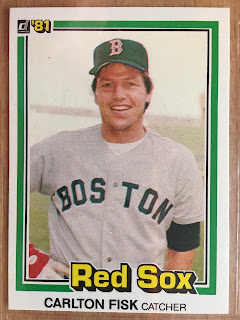 Carlton Fisk played twenty-four years in baseball, primarily as a catcher. Just typing that sentence out is enough to make my knees ache. Fisk was the Rookie of the Year in 1974 when he led the league in triples, batted 0.293 with 22 homers, which also helped him to an All-Star game and a Gold Glove award. He was just getting started as he was elected to ten more All-Star contests and earned three Silver Slugger awards. Fisk finished his career with 376 home runs and a 0.269 batting average.

No Card -- Bid McPhee
Bid McPhee, Veterans Committee elect, played eighteen years for the Cincinnati Red Stockings and Reds from 1882 to 1899. The speedy second basemen was a career 0.272 hitter who once led the league in home runs (8 in 1886) and triples (19 in 1887). In fact, McPhee is eleventh all-time in career triples with 189. He made his name as an elite defender at the keystone position without using a glove. McPhee finally started using a glove at age 36 in 1896 and he immediately broke the fielding percentage record as a result. 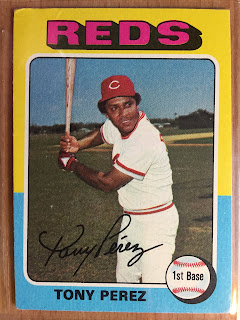 Tony Perez played sixteen of his twenty-three big league seasons with the Reds and helped them to two World Series titles. Perez was elected to seven All-Star games and was an integral part of the famed Big Red Machine in 1970's. Over his career, the first basemen hit 379 home runs and batted 0.279.

No Card -- Turkey Stearnes
Turkey Stearnes, a center fielder in the Negro Leagues from 1920-1940, hit over 0.300 in fourteen seasons. He was one of the best power hitters of his generation as he led the league in round trippers six times during his career. “He hit the ball nine miles. He was a show, people would go to see him play.” 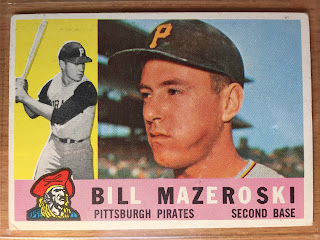 Bill Mazeroski, a splendid second baseman, played all seventeen of his years with the Pirates. The career 0.260 hitter won eight Gold Glove awards and was elected to All-Star contests during seven different seasons. Maz is probably best known for his walk-off home run in Game 7 of the World Series in 1960 versus the Yankees. That shot earned him World Series MVP honors and The Sporting News' Major League Player of the Year award. 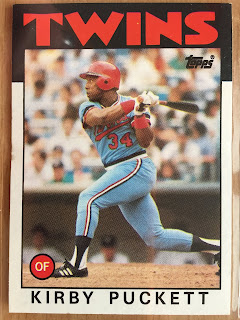 Kirby Puckett only stood at 5'8", but he was an exceptional center field talent and all-around ball player. He actually played at Bradley University for a year during college and led the Braves in home runs! Puckett was elected to ten All-Star teams during his 12 MLB seasons and he won six Gold Gloves and six Silver Sluggers. The career 0.318 hitter helped Minnesota to two World Series titles. Puckett was forced into early retirement due to retinal damage to one of his eyes.


No Card -- Hilton Smith
Hilton Smith is often overshadowed within Negro League history because he was a teammate of the ever-flamboyant Satchel Paige. Smith is said to have had the best curveball in the league and he is credited with 20 or more wins in each of his first twelve seasons with the Kansas City Monarchs. I think this quote sums up the kind of pitcher he was quite nicely. "The old-timers would all say that if you were going to hit anything, you better hit it off Satchel because you weren’t going to touch Hilton Smith.” 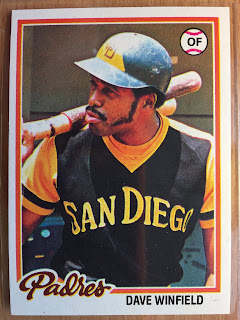 Dave Winfield socked 465 homers, recorded 3,110 hits and batted 0.283 during a twenty-two year career with six different teams. The 6'6" outfielder was voted to twelve All-Star teams, was awarded seven Gold Gloves and hit his way to six Silver Slugger awards. During the 1980 season Winfield was credited with TWENTY outfield assists during the 162 game season. (Why did they keep running on him?!?) At age 40, Winfield hit 0.290 with 26 home runs and 108 RBIs to help Toronto win its first World Series championship in 1992.

Although I thoroughly enjoy the Maz card, the '78 Topps Winfield steals the show for me this week. The color scheme of the Padres' uniform and those unbeatable sideburns take the cake. That's a great looking card! Which one is your favorite?