Taking the Cats for a Stroll

My wife and I like to get out and exercise. She has a running partner she meets up with religiously twice a week and I really admire her for that. I'll go for a hike at the local nature center or a jog around the neighborhood when I can.

Often, when the weather and time allows for it, we'll traverse the neighborhood together on an evening walk. It's a great way to get the heart rate up and catch up on each other's day. During these walks it is not uncommon for us to run into dog walkers. I'm a dog guy, but my work and coaching schedule wouldn't be fair to the dog, so we've got a pair of cats to keep us entertained.
Most the time, they just sleep around the house, like in the picture above, but they can be good company on occasion.

Laura and I have joked the last few years about taking the cats for a walk. Cats are not dogs, and we know this. Their idea of a walk would be go from their chosen sleeping spot, to the food bowl, to the litter box and back to their warm spot to catch more shuteye. Cats. SMH.

Finally, we decided to go for it. Yep, we bought a stroller to take the cats out. 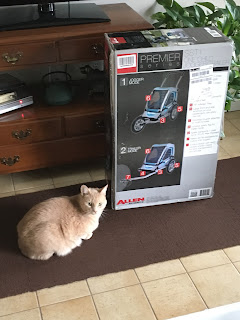 Hugo seemed really interested in the box at first. He, like every other cat I've known, has a thing for boxes.

Laura assembled the stroller and we've probably taken the cats out twenty different times during the last two months. I've done a little jogging with them, but mostly we're out just to have a nice walk. 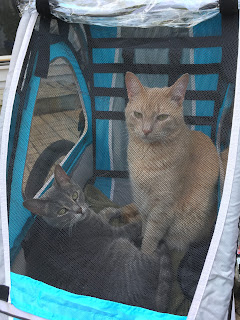 Holiday has gotten to the point where she'll willingly jump into the stroller, but Hugo generally has to be coaxed in. Holiday will typically lay down in a position where she can look out one of the windows. Hugo's much more active and likes to follow the squirrels and robins as we pass.

To answer a couple of questions:
In general, I think it has been a good purchase. Having the stroller motivates me to go out for a little more exercise than I normally would. It's been good for the cats in terms of socialization. Also, it's put a smile on everyone's face we've encountered.