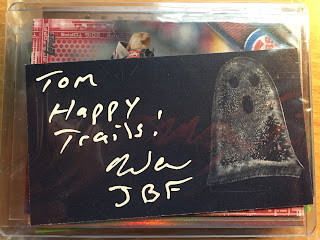 Surely you saw this post over the weekend. Wes, also formerly known as JBF, is pursuing one last big hurrah.
Like many of you, I have received more than my fair share of cards from the man who hails from Hazel Green.
While trying to keep up with return fire I actually found I had memorized Wes' shipping address. LOL.
Lately, I've been more than happy to sit on the sidelines, grab a bucket of popcorn, and watch Wes drown BWTP in cardboard, jerseys and even a hockey stick. Wes and Matt are two of the best ever!
More recently though, blog posts have been showing up around the blogosphere spotlighting retirement packages from Wes.
Wes is the only person I've ever known to send out gifts when retiring. Everyone else I've known has had a party thrown in their honor, maybe roasted & toasted, and given a few nice presents.
I think this speaks to Wes and the overwhelming generosity his name has become synonymous with. 'Tis better to give than receive.
When I wrote this draft I had no idea what Area 40 was about, but I have since come to realize it will be epic and I hope he'll let me help a little along the way.
Actually, I know there are few bloggers out their with a similar mindset. Maybe we can band together and send him out with a bang? 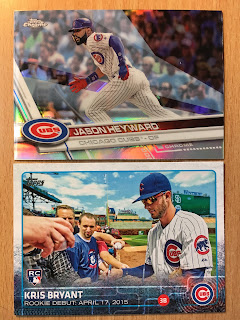 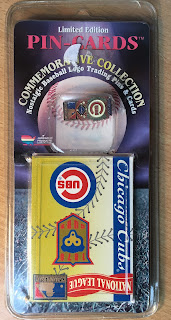 If this truly the beginning of the end for Wes' card days, then I think I can hear mailmen all along the P-town/Hazel Green route rejoicing. 😂
Wes, thank you for all the cards in this post and the past. You have single-handedly increased my Cubs collection 10-fold over the years and have blessed me with more of a following than I ever could have imagined by simply sending me cards to blog about. I'm not quite sure how to repay you, but I'll think of something. Actually, your new project is something I can definitely help with. I can't wait to hit a card show and see what I can come up with!  This should be fun!
Posted by P-town Tom at 6/11/2018 05:47:00 PM