Every now and zen then I get some set help. Today's cards come from Doe, who lives up I-55 from me in Chicago. 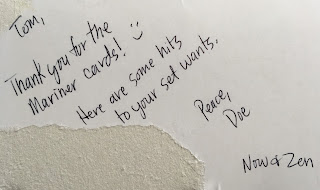 I believe Doe writes a blog entitled Now & Zen, but for the life of me I can't find it.

Some 1990 Donruss needs give us a pair of guys who probably belong in the Hall of Very Good. 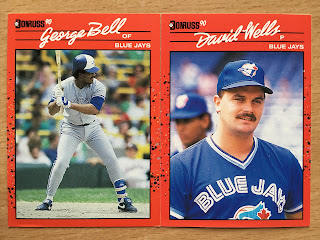 George Bell was an MVP, a 3-time All-Star, and a 3-time winner of the Silver Slugger. David Wells seemed to pitch forever. Twenty-one years in "The Bigs" is a long time! Boomer was also a 3-time All-Star.

Doe also included a hefty stack of 1990 Topps. Below are the best players I could find from his PWE. 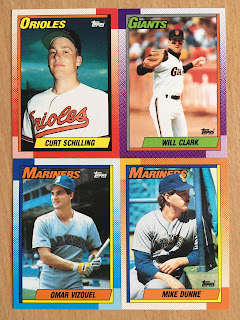 Curt Schilling was a six-time All-Star, finished second for the Cy Young three times, and had a bloody sock in the playoffs which almost broke the internet. Will Clark was also a six-time All-Star, he won two Silver Slugger awards, and he single-handedly defeated the Cubs in the 1989 NLCS by batting 0.650 with a 1.882 OPS. Ridiculous offensive performance! Omar Vizquel played for twenty-four years and won eleven Gold Gloves. In my opinion, he has an outside chance of graduating from the Hall of Very Good and entering the Hall of Fame. 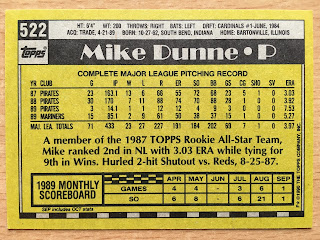 Mike Dunne? He's another local product and he also played collegiately at Bradley University in P-town. There's another Mike Dunne playing for Bartonville's high school team currently. It's probably his son, but I haven't asked around.

Thanks for the cards, Doe. I'm glad you could use those Mariners!