We lost our Sectional Semifinal contest last Thursday and our baseball season came to abrupt halt. The very next morning I was driving from P-town to Breckenridge. I found it difficult not to replay that last game over and over in my head while on the fourteen hour trek west, but my wife is an excellent road trip companion.

We arrived at a rental home on Saturday and it was incredible. It easily slept nineteen. Yes, nineteen. This was a cousins trip so to speak. My wife's sister and three cousins, and their spouses and children, were all in attendance. There were eight bathrooms and three kitchens. The place really met out needs and it was only about a quarter mile walk from downtown Breckenridge. 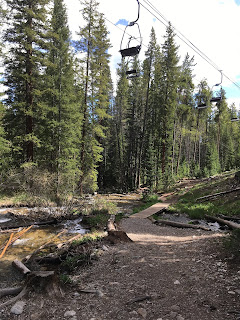 The temperatures sat in the low 70s during the day and reached the middle 30s at night. We actually had rain with a mixture of sleet one night. Crazy. Skiing though? Out of the question. The above picture was taken on one of the many trails that follow the ski lifts and/or ski runs.

There's still plenty to do during the summer months. I did a bunch of hiking, although it took some getting used to the elevation. There were also mountain bike trails which look very exciting, but the one cousin who I thought would be game wasn't interested at all. Bummer.

Touristy and artsy.  The below picture shows and "umbrella ball" exhibit that was set up downtown. 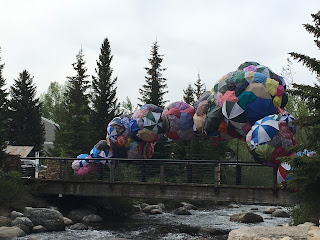 I found a big robot.  I bet my dad could create something cool like that! 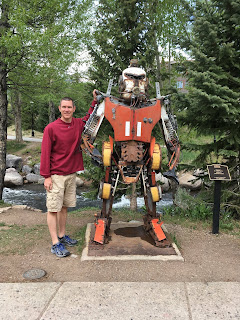 Moose. It's a little known fact here on the blog, but one of the items on my bucket list is to encounter a live moose. Seriously.  I find moose to be majestic. 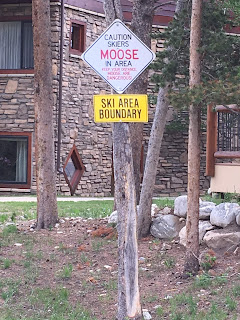 I ran into this sign on one of my hikes, but had no luck. I did find this cute little guy in the front yard of a nearby residence. 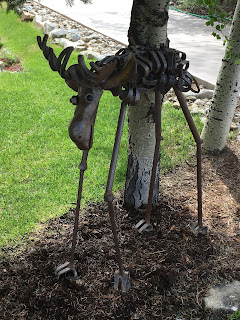 It's not quite the real deal, but it made me smile.

Laura and I tried to do our first "fourteener." 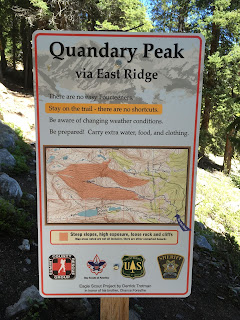 They call them "fourteeners" because they're mountains where the top is above 14,000 feet above sea level. We had to take a few breaks on the way up and in the photo below you can see my beautiful wife lying in the grass on the side of the mountain. We didn't make it all the way to the top of Quandary Peak, because there was too much snow and we didn't have the appropriate gear. Queue the sad music.

We did make it past the 13,000 foot mark, which made me pretty happy. We also ran into this guy during our decent. 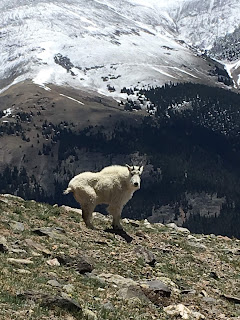 It's no moose, but mountain goats are pretty gnarly if you ask me. There was a pair of them and they were actually quite friendly as they followed us back down the mountain to the tree line for a snack.