Asking a question as Vogelbach Rides the Shuttle

How about a quick Vogelmonster update?  Below is my second Dan Vogelbach card of 2018. Woo-Hoo! 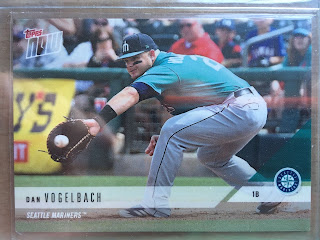 The photo selection on this one is very solid. I also find this picture does well on a horizontal card.

The back?  Well, the reverse side leaves a lot to be desired.

This card is from the Road to Opening Day Topps Now Mariner team set from the preseason. From what I've gathered all the backs have the exact same blurb. Bleck.

Concerning the backside blurb: the Mariners are in the playoff hunt, but there's about a hundred games left in the season and anything can happen at this point. Topps may see Vogelbach as a "key player" but I don't think the Mariners do. The Vogelmonster has been riding the Seattle-Tacoma shuttle back and forth all season. His AAA stat line is quite fierce, but he has yet to produce at the MLB level. Hopefully that will all change soon!

I have 181 unique Vogelbach cards from 2017 in my collection, but only two from 2018. The first being from the Mariners retail team set by Topps and that gave me hope Vogelbach would be included in Series 2. Yet, I was disappointed to learn Vogelbach was not included within Topps' flagship product, which is to be released later this week. And this knowledge prompts the question...

Is a player featured in the retail team set guaranteed to have a card in either Series 1, Series 2, or Update? So far Vogelbach is 0-for-2 and and I'm holding breath he's included in Topps Update.

I know sometimes the photo selection changes from the retail team set to the flagship product, but often times the cards are identical except for the numbering on the back. That's pretty much where my knowledge begins and ends with these retail sets.

Anyone out there have any experience concerning player selection between the retail team sets and S1, S2 or Update?  I would love to hear from you!
Posted by P-town Tom at 6/12/2018 05:05:00 PM