I guess I'm still shocked at all of the fuss the Cubs created by putting Bryce Harper on first base seven times, without a hit, in seven plate appearances on Sunday. Yes, I know it's an MLB record, but I also know it's not "scared baseball" as some would call it. Strategy is one of the many reasons I love the game, and I tend too look favorably upon nontraditional strategies . . . especially when they work!

Not everyone is up in arms about pitching around Harper, but most of those who don't have a problem with it are Cubs fans.  Exhibit A:

More Twitter fun, but this time on a different subject . . .

Moving on . . . I made it to my second P-town Chiefs game of the season this past weekend and I was able to acquire two bobbleheads of The Bringer of Rain and I also got my picture taken with Homer, the Chiefs' mascot. Homer lost some weight in the off-season and I'm happy to now report that he now also wears pants.  He was loooooong overdue for a new look. 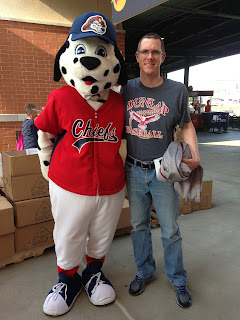 My good buddy Jim and his wife moved into a new house and he claimed the one decently sized room in the basement as his own. I was able to watch a Cubs game in his new man room the other night. 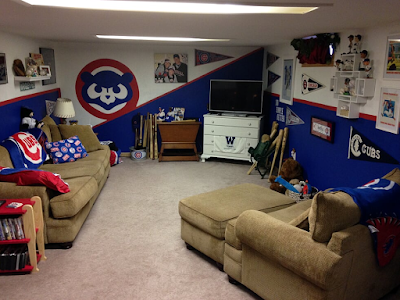 He claims there is more decorating to do, but I think it is already TOP notch. I'm uber-jealous of all the space!

Speaking of top notch . . . after reading one of Tony Burbs' blog posts about Gypsy Oak I decided to look the guy up on Ebay.  I found a Ryne Sandberg sketch card that I liked and put in a low bid, but I didn't win. The next day I had a second chance offer from the Gypsy Oak seller for my original bid.  I agreed to the purchase and I'm very glad I did. 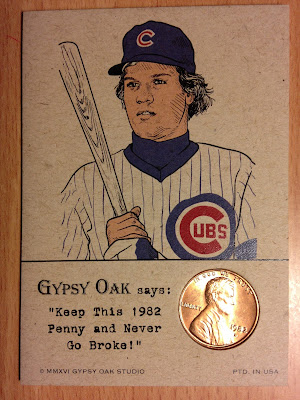 I'm now up to 794 different Ryne Sandberg cards and one penny in the binder! Another milestone is right around the corner!

Lastly, I picked up this Dylan Cease autographed card (#'d/25) on Ebay the other day for $2.99 with FREE Shipping. Cease is a young up-and-comer in the lower levels of the Cubs system. He was drafted in the 6th round of the 2014 draft even though he just about to go under the knife for Tommy John surgery. He was a first round talent before the injury and the Cubs were willing to be patient with him during the rehab process. 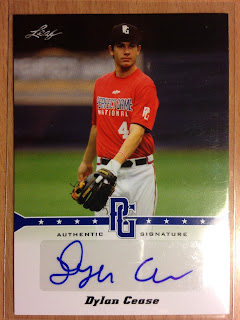 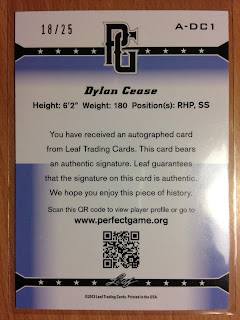 Cease is healthy now and can throw SMOKE.  He's still very young, seems to be pretty athletic, and he possesses a very high ceiling. Everyone knows I love my prospects!