I must admit, I love high-end sets. The photos are so crisp, the print runs are low, autos and serial numbering abound, and every card feels like a hit.

Yet, my pockets are decidedly a bit on the shallow side and I must cherry pick cards from Ebay when I can. 2016 Topps Legacies of Baseball released a little over a month ago and I finally pulled the trigger on one cards.

Boxes of Topps Legacies of Baseball contain one pack and each pack contains four cards. The price for a box will run you in the neighborhood of $120.  If you're thinking what I'm thinking, then yes, that is an average of $30 per card. Yikes! Two of the four cards in the box are autographs, one is numbered to 99 or less, and the other is a metal card.

On the left is an example of one of the serial numbered inserts titled, "Lasting Imprints". Honestly, this card creeps me out. Fergie looks like some sort of bronzed ghost reaching out to grab me. 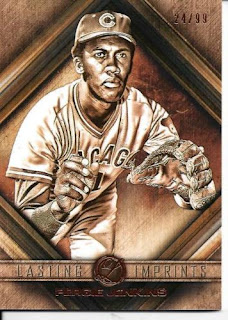 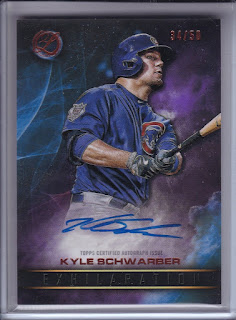 The card on the right is GORGEOUS. It reminds a bit of Bowman Inception from a couple of years back. Just a beautiful design that is well executed. (Both pictures were swiped from Ebay.)

The autos are what drive the product and other than Kyle Schwarber on the checklist a Cubs fan can hope to find Kris Bryant, Mark Grace, or Mark Prior.  I wouldn't be against adding any of the four, but I'll probably have to settle for Grace or Prior due to budgetary constraints.

I passed on the numbered inserts and the autos and went straight for the metal card: 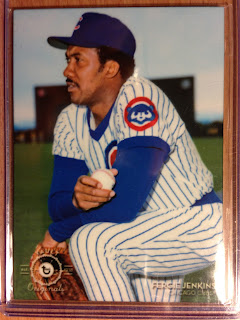 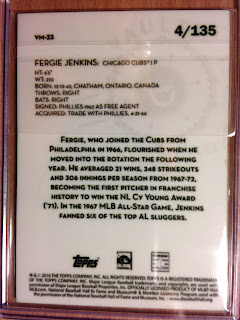 These are officially called Vault Metal cards and they're pretty sweet. It's about as think as a relic card and certainly carries some heft to it. Some may say the card is a little bland, but it's simple and I've always been attracted to understated designs. There are fifty different metal cards in the set and there are also colored parallels to the metal cards. I chose to chase the base, which is numbered to 135, and I paid just under $5 for this unique addition to my collection.

In theory, someone paid $120 for a four card box, and I bought one of them for an Abe Lincoln. I'm not sure what that says about the card market, but I'll take advantage when I can.

Now is a good time to snag yourself some Legacies for cheap. Again, it's about a month after the initial release AND GQ and Bowman just came out. The prices have been dropping and you, too, can own your own metal card!