Trying to Keep the Streak Alive

First, a quick cut and paste job from yesterday . . .

Here's how things have played out so far:
The Cubs are 0-1 in playoff games in which I did not write a blog post beforehand, nor eat a jalapeno cheeseburger.
The Cubs are 3-0 in games in which I quickly typed up some drivel and also attempted to satiate my appetite with one of my favorite pleasure foods.

Never mess with a streak. (Careful, I don't know that these twenty-eight seconds are safe for work.)

So, yeah.  MLB is trying to mess with my streak.  The game starts early and it's on TBS, which means a few things:
1. I need to high tail it out of work and find a local watering hole to watch the game at, because I don't have TBS.
2. The aforementioned watering hole must have a jalapeno cheeseburger on their menu, which I probably won't have in front of me until after the game starts.
3.  I actually had to type this post yesterday because there's no way I could squeeze in a blog entry in the limited amount of time I have to find a TV.

I'm typing the post early and will eat the cheeseburger late. I hope the baseball gods who are in charge of the Streaks Department can forgive me for this one.

The last two Cubs players I picked to be player of the game have each homered in their respective games. Heck, it felt like they homered on Monday.  Let's go with with Javy Baez and his protective oven mitt for Game 4 of the NLDS as my pick to click. 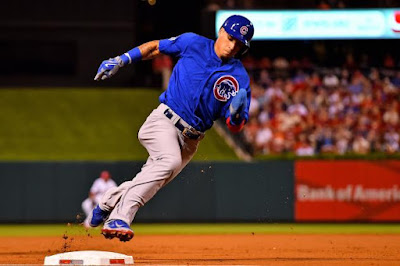