Side note: I just realized that for the first time in my life I have a guy.  You know, like those mobster likes in the movies that "have a guy" who can manage to get them the most random item in a pinch.  I've always been pretty jealous of those individuals with cool connections, but now that I think about it I guess I have a bunch of guys.
Guys (and gals), thanks for being my guys. :)

Anyways, I don't have much use for any White Sox cards I happen to accumulate, so it's nice to have a guy who appreciates them more than myself.  From time-to-time I send a little something up I-55 to the Chicago suburbs and magically, a little something from 2x3 Heroes finds its way into my mailbox.  JediJeff is my White Sox guy.

Let's break into this PWE and show off the contents in order of oldest to newest. 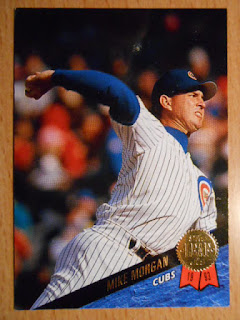 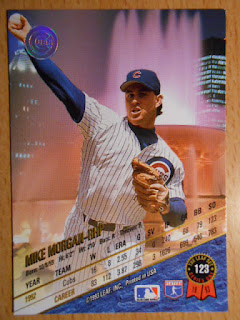 Here we have a 1993 Leaf card of Mike Morgan.  Morgan actually had one of the better Cubs pitching seasons in the last thirty years back in 1992. I find it odd the front is so dark and the back of the card is so bright/colorful.  Nice addition and a sweet start to a PWE. 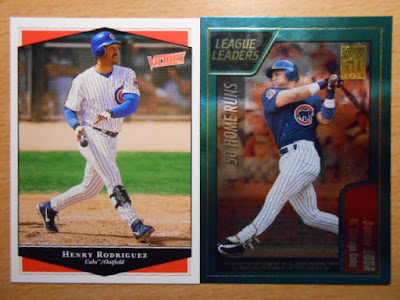 I think this Upper Deck Artifacts card of Big Z is from 2007, but it's already filed away in my Cubs box and I'm too lazy to take the stairs to the man cave and check to be sure. Nice design. 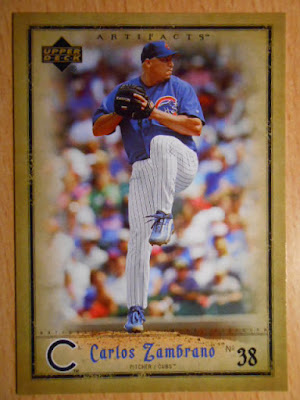 High-fiving Cubs and a double-dip featuring The Riot from 2008 Upper Deck. I still haven't figured out why the Soriano is all foiled up and the Theriot isn't.  Anyone care to educate me? 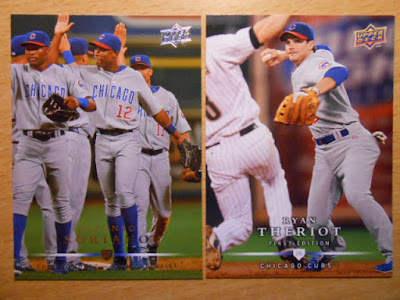 2009 Topps Attax card of Mark DeRosa.  I'm starting to wonder Javier Baez is going to be turned into a Derosa/Ben Zobrist type of player. Baez saw time at first base the other night, which means he's played all four infield positions this year. 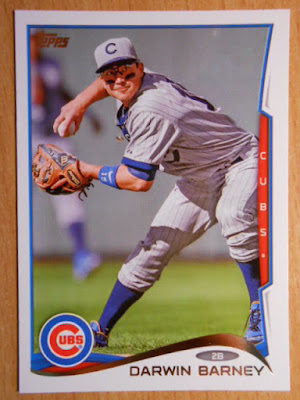 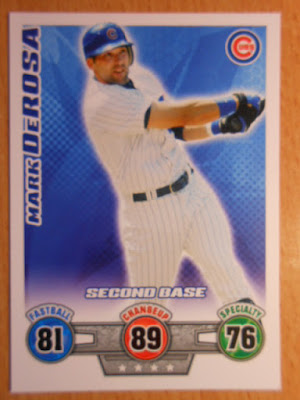 And we fast forward five years to a throwback uniform sportin' Darwin Barney.  I usually send Jeff my double-dip and throw back cards, but this one and the Theriot card must be duplicates.

Minis and Sportdisc from 2013 Panini Hometown Heroes.  This one fills a hole in my Kerry Wood collection!  It's the first time I can add "2x3 Heroes" to my ledger as a contributor, but the 420th different Wood card in all. 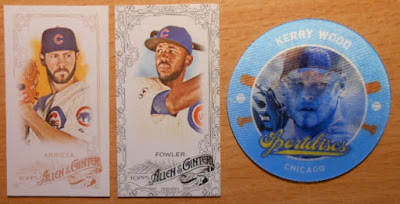 On the left are a pair of minis from the 2015 A&G set.  The Arrieta is a nice catch and I hardly recognise him without his hipster lumberjack beard, but I'm more pleased with the Dexter Fowler.  I need more Fowler in my collection! 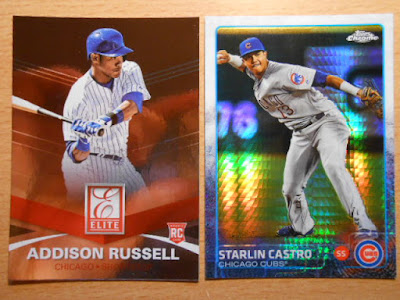 Lastly, we have two more cards from this year's crop of cardboard.  Addison has done a nice job at shortstop and I think his bat will come around in the couple of seasons.  Starlin has been very impressive as of late, not just with his bat, but his team first attitude.  The refractor is very shiny and I really dig the pattern it shows.

Thanks for the cards Jeff!  I'll look to return the favor soon!