I've been on spring break for the last week, which means no teaching but plenty of coaching. Between baseball practices and games my wife and I have been working on our laundry closet in the main hallway.

The original idea was to take the existing bi-fold doors and install new hardware so the doors would become "full-access." Previously, there wasn't enough room when the doors were fully open to allow us to reach the dials on the washing machine comfortably. It was such an inconvenience to find a way to phenagle your arm behind the bi-fold doors to operate the washer's controls.
The project then turned into "Well, we might as well put in tile floor, paint, and re-work the shelving system."  The closet looks really good and I'm happy we spent the time to do it. Fun note: the closet makeover cost only $86 and most of that was spent on the hardware to make the doors full-access. We used leftover paint, tile and other materials from previous projects to help with the cost savings.

And now for a fun story!

The project was delayed early on. I was downstairs tinkering with something on the work bench and I left the laundry closet unattended. Mistake. 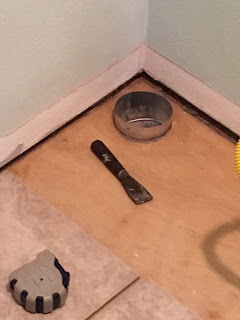 As you can see in the above picture I was in the laying/cutting tile stage. In the corner you'll notice the dryer duct work, which I never once thought about covering.

When I returned to the closet I found our gray cat, Holiday, had her head inside aluminum pipe. She was going nuts. She has one toy she absolutely adores and I knew she must have dropped it down the pipe. Nothing short of that would have put her in such a state.

I stuck my camera phone inside the tube and I was able to see a faint outline of her toy, which can be described as nothing more than over-sized gray cotton ball.

I reached my arm as far as a I could into the piping, but I couldn't reach too far because the pipe took a 90-degree turn to follow the floor joists. No luck, it was out of reach. 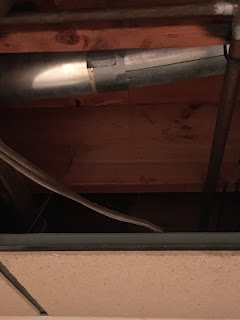 So, I went downstairs, removed a couple of drop ceiling tiles and found where I needed to be.

I pealed back some duct tape and was able to disconnect the aluminum pipe. 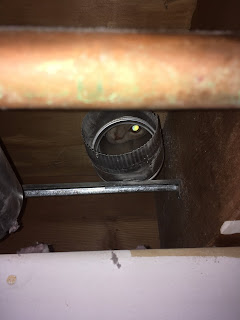 Above is a picture of our other cat, Hugo, asking if I needed any of help. So considerate.

Once the pipe was removed the gray puff ball rolled out of the dryer pipe safely and came to a rest on top of the step stool. 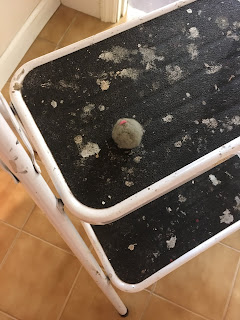 I placed Holiday's cat toy out of reach until the project was over, because I wasn't trying to enlist myself into another rescue mission.

We finished the laundry closet yesterday and she got her little puff ball back. She can be seen carrying it around house and batting it up and down the stairs.

All is right in the world again. Truly, a happy ending.