Thanks to all the well-wishers from my 7th blogiversary post last week. This cardboard community of ours is great and it's the main reason I've stuck around as I have.

Cardboard. Cardboard is nice, too! 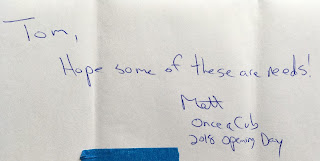 Matt, from Once a Cub, busted some Topps Opening Day and he sent me a boatload in a pair of PWEs along with some other high quality Cub offerings. 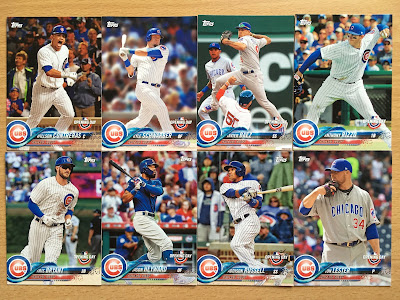 I still haven't bought any new product from the 2018 cardboard season. 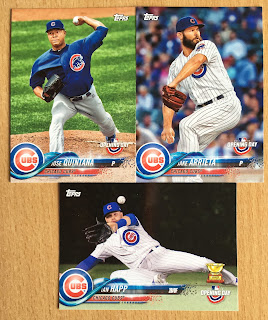 Yet, I'm doing okay.  I don't have the shakes and I'm not hyperventilating.  So, yeah... we'll just see how long I can keep this crazy little streak of mine going. 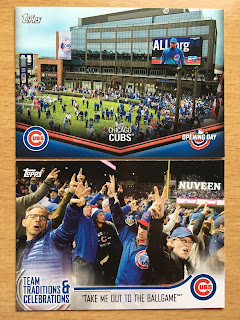 I was desperately hoping someone would hook me up with the above two cards. The lead page in all of my Cubs binders are full of cards like this that try to capture the sights, sounds and smells of Wrigley.  These two will be terrific additions. 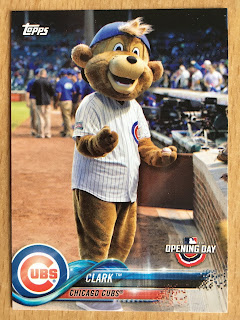 Clark! Clark is on a couple of those lead pages himself...  and it looks like he'll be found on another now! 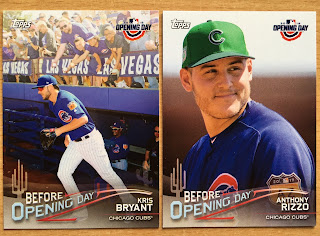 Spring training cards? These are pretty cool. Bryant is from Las Vegas so that card is pretty neat. The St. Patty's Day green hat is something different to add to my Rizzo collection. 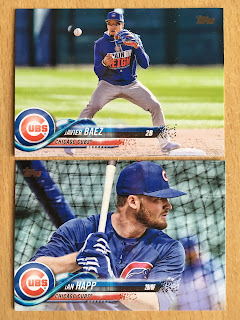 Some Topps Series 1 made it into the two PWEs as well. Baez has been on a tear as of late and he's so entertaining to watch. 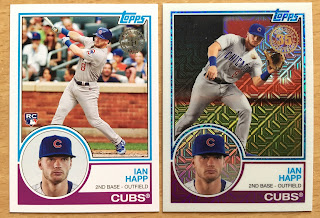 These are my first looks at the 1983 insert sets and I must admit that I like them very much. The one on the right mentions Tony Gwynn, Wade Boggs and Ryne Sandberg all having rookie cards in the 1983 set. 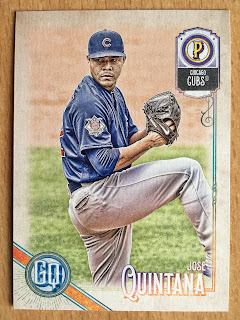 My first Gypsy Queen card of the year is none other than Jose Quintana. I wonder if Matt bought a spot in a player break hoping to snag a couple of variations on the cheap. That's totally something I would have done if The Vogelmonster was in GQ. 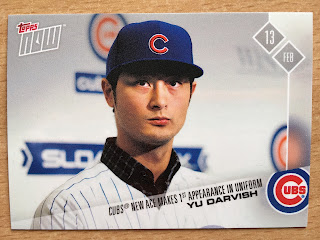 Yu Darvish is NOT pitching well. His face in that card kind of mirrors mine when I look at his stat line in the box score the morning after he pitches. Ugh.

Ryno!  This first one is from Panini Chronicles, which I though was a very unique concept for a set. 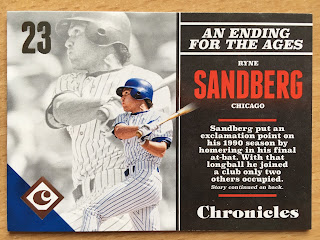 The next two are from this year's 2018 Donruss main set. 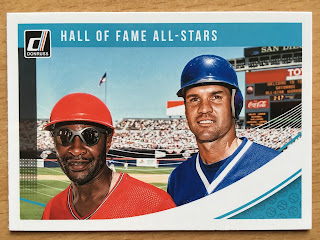 That big ol' white swoosh looks in need of some lettering. Very odd. Ozzie looks like a bug with those sun glasses on.  No matter... we're not here for Ozzie...  RYNO! RYNO! RYNO! 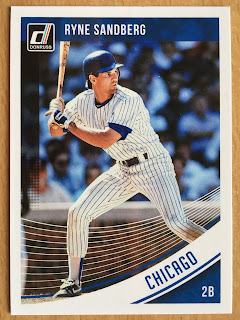 Last card of the PWEs sports another addition to my Sandberg player collection. Very nice.
I'm now up to 869 different Rynos. The 900 milestone is within reach if I want to pursue it.
We'll see though, because I have other ideas on how I'm going to spend all my card money this year. For example: I need to save some dough for when The Vogelmonster goes on his inevitable homerun tear and hitting streaks. Vogelbach will be the poster child for Topps NOW before the season is over. You heard it hear first!

Matt, thanks for the nice cardboard surprise in my mailbox last week. It was very much appreciated and I'll see what I can do about evening the score before too long.

Quick Update: I'm still not back to full blogging strength because school and my baseball coaching duties are demanding much of my time. Seniors graduate three weeks from today, which means the end of the school year isn't far behind. Baseball?  Well, I'm hoping that goes into late May and/or early June. We're on a nice little winning streak right now and gave an undefeated team their first loss of the season yesterday. It was a good day. Overall, our record is 15-2 at the halfway point of the regular season. I'm hoping the second half of the season and the playoffs go as well as the first half!