About seventh months ago, right when spring training was getting into full swing, I asked my readers to predict Dan Vogelbach's 2017 MLB OPS.

I was drinking heavy doses of the Vogelmonster Kool-Aid thinking he would amass a minimum of 200 plate appearances. Then reality came knocking.

Vogelbach was sent to AAA Tacoma to start the season, but he did receive the call to Seattle three separate times. He played in sixteen total games, starting six, and came to bat a grand total of thirty-one times during the season.

I decided to create a quick contest to stir up some excitement within our little community. Yeah, that back-fired. I was planning on blogging regular updates during the season to keep people up-to-date, but I couldn't bring myself to put a spotlight on the Vogelmonster's campaign when it was obvious he wasn't getting a serious look by the big club.

The contest was pretty easy, and I had around ten entries. The highest OPS prediction was 1.000... thanks Gavin! The lowest was arpsmith, he of ARPSmith's Sportscard Obsession:

Vogelbach started the year with an OPS of 0.650 and bottomed out at 0.395 on September 27th. He didn't see the field again until Game #162 and he entered in the 5th inning. He had his best game as a pro, as he went 2-for-2 including his first extra base hit. (Link to video.)  Crazy enough, he raised his OPS 145 points with two at-bats. Small sample size alert!

No matter how you slice, arpsmith is the winner here. Vogelbach ended with a 2017 OPS of 0.540.
Adam, which blast would you like for your prize? Let me know! 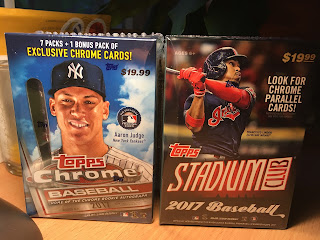 I thought about doing a Zippy Zappy like breakdown of the Vogelmonster's season, but instead let me just throw some other numbers at you:
I guess what I'm saying is not everyone can be a Cody Bellinger or Aaron Judge right out of the gate. Actually, after further inspection, Judge had an OPS of 0.608 over his 95 plate appearances in 2016. So yeah, there's that.

Yonder Alonso and Danny Valencia, the two veterans blocking Vogelbach's playing time in 2017, are both free agents this winter.  The book is certainly not closed on The VOGELMONSTER! Stay tuned!
Posted by P-town Tom at 10/02/2017 08:20:00 PM