I was a set builder back in the late 80s and early 90s. Nothing in the world of cardboard back then gave me more joy than ripping wax packs and chasing down those last few cards. It's been nearly two years since I built a set from packs, 2015 Bowman Draft, and I don't know if I can officially call myself a set builder if I take such a hiatus between sets.

I've had my eye on the lookout for a set similar to the Topps Fire Insert set in 2016 Update. Then I heard whispers back in April about Topps making a full set in this mold. I was granted my wish when I saw the details released on Cardboard Connection. The set supposedly dropped last week at Target retail stores, but I couldn't find any until yesterday. 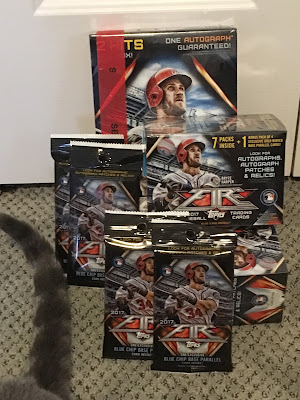 The set is 200 cards deep, there are all kinds of numbered parallels and there is an autographed and relic checklist as well. I've got my eye on the Bryant/Trout/Harper triple auto card... dare to dream!  In all, it looks like a fun rip, but I've only had time to open one Fat Pack since my initial purchase of the cards above.

The best thing for this collector is that the Cubs have 17 cards in the 200 card set and The Vogelmonster is also represent!  I'm pretty pumped about that!

So, let's take a look at the twelve-card Fat Pack I purchased. 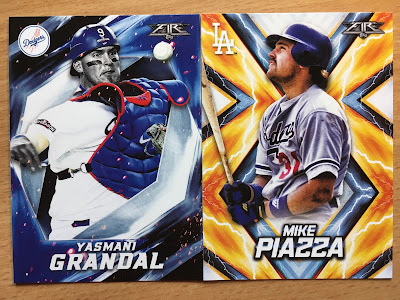 The checklist has some retired players mixed in with today's current stars and rookies. I guess the retired guys get a logo from the past, which is why these Yasmani Grandal and Mike Piazza cards have different Dodgers logos. 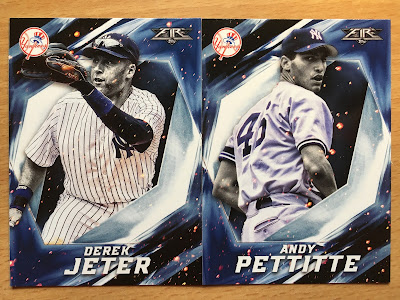 Two more retired guys. I'm trying to figure out the coloring schemes. Three of the four cards so far seem to have colorless faces.  Are these the base cards? Are these parallels? 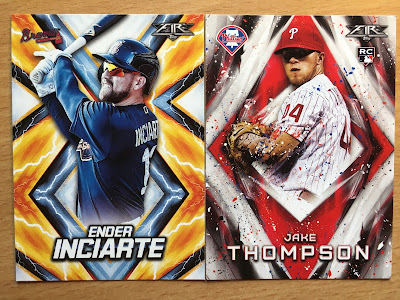 The Ender Inciarte card is on the same design as the Piazza card. One's a current player and one is retired. Throw in Jake Thomspson, a rookie, on a different design, and now I'm really confused. 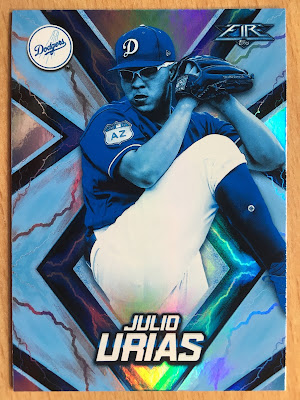 The Fat Packs boast one blue chip base parallel in each pack. Finally, some clarity! Man, this is turning into a Dodgers hot pack! 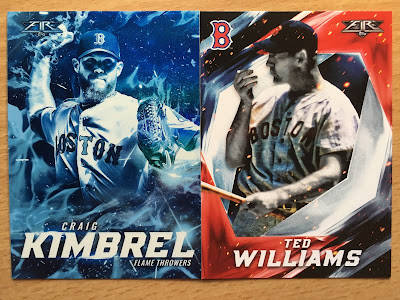 A pair of Red Sox to add to the mix. Flame Throwers is a neat insert set, and I'll show the back off in a little bit. I love that Ted Williams picture! 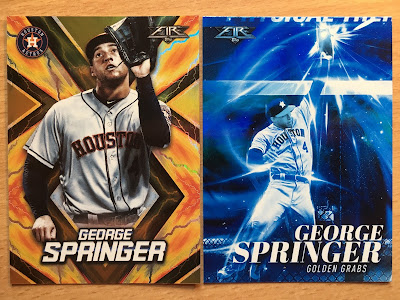 George Springer Hot Pack!  One in five packs has an orange parallel numbered to 299 in it. The Golden Grabs insert set is done up nicely by the graphic department. 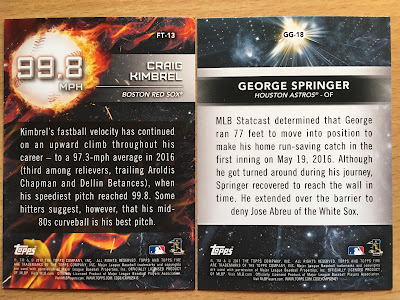 Here are the backs of the two insert cards.  Nothing too crazy here, but I dig the big 99.8 MPH on the Flame Throwers card.  Oh, and MLB's beloved Statcast makes an appearance! 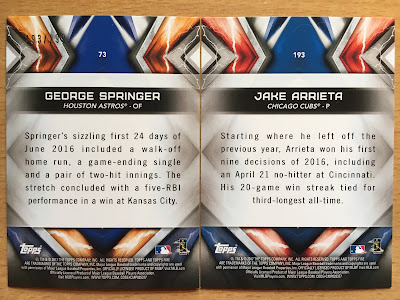 Here are your other backs. All of the base cards are blue and red, like the Arrieta card on the right. The Springer card replaces the red with orange, I'm guessing because it's an orange parallel.

I guess I kind of spoiled the last card of the pack.  It's not a hit or anything crazy, but it made this Cub fan happy. 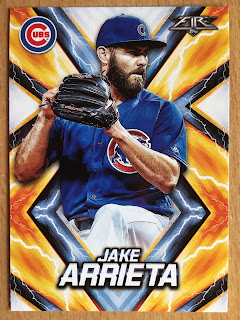 Arrieta will be declared a free agent in November. I'm hoping he pitches well enough to earn himself a nice fat contract. The Cubs won't be able to resign him if he does, but that means he may have helped the Cubs play into early November again. I'll take that!

I'll be ripping more of this product in the next week. Hopefully, I'll be able to get a want list together and make a decision as to whether I should visit my Target again before all the packs sell out. I'm crossing my fingers for good collation!

At some point I make a post with trade bait. I won't be chasing the parallels, but maybe some inserts... we'll see what happens. If you're interested in any of my base duplicates let me know. I'd be happy to swing a trade, especially with those of you who don't have access to a nearby Target.

Lastly, my Target had eight blasters ($20), about ten Fat Packs ($5 I think), and three boxes ($70) left on shelves as of yesterday. The prices on Ebay are kind of outrageous right now. If you're interested in some of this product I'd be happy to secure you some if you'll pay for the cards and shipping. Plus, that gives me an excuse to buy some more for myself while I'm at the store again. Just let me know!
Posted by P-town Tom at 10/07/2017 12:09:00 PM