I logged 955 posts under the "Waiting 'til Next Year..." heading, and this is my first post about cards as the new Eamus Catuli!  Thank you to all for the positive feedback about the name change, but it still feels really weird.

David, from Alaska, sent me a PWE out of the blue the other day . . . and it was simply fantastic.

There is little more I love in this cardboard collecting world than adding a shiny, new Cubs card to one of my player collections. 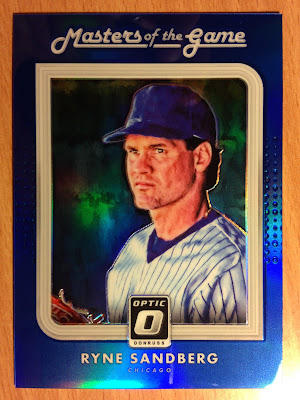 The card you see above is a 2016 Donruss Optic Masters of the Game card of Ryne Sandberg numbered 005/149. It's the 818th different card of Ryno I've been able to add to my collection, and what a fine addition it is!

Next up is a custom card from David that made me a little sad. 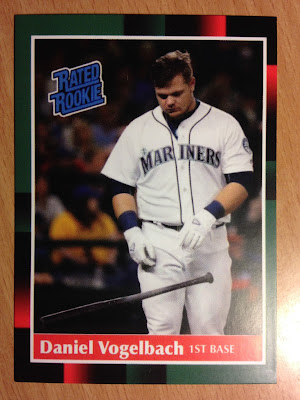 See what I mean? 😢 Doesn't the Vogelmonster look sad in that picture? Could it be because he's no longer in the Cubs organization?  Or maybe it's because he didn't fair so well in his first taste of the big leagues?  I should be happy, because this is my first card of the Vogelmonster in a Mariners uniform, and Dan gets a fair shot at a legitimate career with the change of scenery, but instead it's very bittersweet.

Why bittersweet? The VOGELMONSTER was/is my guy!  But then the Cubs traded Vogelbach to Seattle for Mike Montgomery, who earned his first career save by sercuring the final out of the World Series. It was well documented during in late October how Joe Maddon lost faith in all bullpen arms except those attached to Aroldis Chapman, Carl Edwards Jr. and Mike Montgomery.

Montgomery seems like a guy who might catch on with the Cubs for the long haul as either a high leverage arm out of the bullpen OR as the #5 starter. I think he'll take Travis Wood's spot in the pen in 2017 and spot start from time-to-time, but we'll have to wait and see. 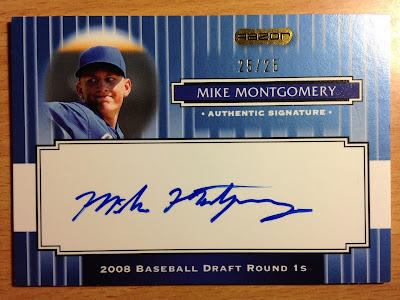 I picked up this 2008 Razor auto, numbered 25/25, of Mike Montgomery from Ebay for about $7 shipped. That's not a bad price considering what Cubs stuff is going for these days. I like it because it doesn't mention the Royals or Kansas City anywhere on the card, and with all the blue it might as well be a Cubs card. For the record, I'm not starting a Montgomery PC, but it is a nice addition to my Cubs box.