Changing the Name of the Blog

I guess I'm a little slow getting around to the name change thing:

"Waiting 'til Next Year..." is something I've been doing since I became a baseball fan, which makes this a tough transition.

Honestly, I didn't think the Cubs would ever tip the scales during the lifetime of my blog. When I started blogging in 2011 they had already logged more than a century's worth of futility. I chose a blog name that I thought had tremendous staying power, but I couldn't be happier to say I was wrong.

It's taken some time, but I think I finally came up with something that I'll enjoy writing on notes of trade packages to my fellow bloggers.

On Sheffield Avenue, behind the right field bleachers of Wrigley Field is the Lakeview Baseball Club building. For the last twenty years the facade of the building has sported the "Eamus Catuli!" sign with numbers.

"Eamus Catuli!" can loosely be translated to "Let's Go Cubs!" This is obviously a saying that I can get behind.

The "AC" stands for "Anno Catulorum," which again is another Latin translation for "Year of the Cubs."

The numbers to the right should really be separated somehow, because they are pretty confusing otherwise. The first two show how long it has been since the Cubs won a division crown. The second pair of numbers reflect the quantity of years since the Cubs captured the pennant, and the last three in the photo above... well... I think you get the idea. 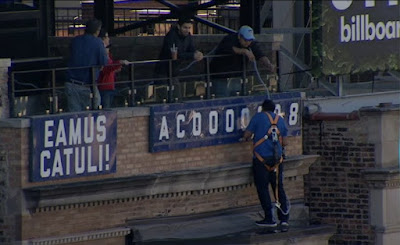 The sign gets changed after every season and now shows nothing but zeros. Very nice! 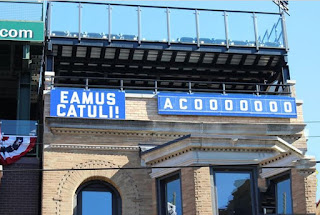 After the 2008 season the sign had to be expanded to allow for a 100 to fit on the far right, which upped the total to seven places for numbers. Rumor has it the sign has been shortened back down to six numerical place holders again, but I can't find photo evidence. I guess the owners figure if it takes another century to win the World Series that it won't be their problem to fix the sign!

So, there you go. New name, but the same blog with baseball cards, and the same intermittently random material sprinkled in for good measure.

Thanks for stopping by and for pushing me to make a change. It was needed and it still makes me smile.