Welcome back! Last post I showed off the oddballs and food promotion cards my dad gifted me recently. This evening we'll take a look at the players he was chasing during the Junk Wax Era.

Back when my sister and I were really into cardboard, Peoria had three card shops that I can remember and it seems like there was a card show within driving distance every weekend. My dad would drive us to a show and let us run loose up and down the aisles. My sister would always be on the hunt for Andre Dawson cards and I would eventually spend much of my paper route money on Ryne Sandberg cards. My father was super patient with us and I never felt rushed while at a show. I'm guessing that's because he was out doing his own shopping!

I thought I knew of all the players my dad enjoyed collecting, but I found a couple in the box of goodies I was unaware of, including Steve Avery. 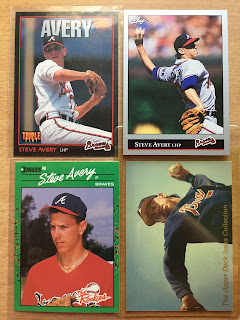 Avery was so hyped when he came up and his helping the Braves to a number of post season appearances certainly did nothing to quiet the excitement. The Ioos Collection card on the bottom right is easily my favorite. 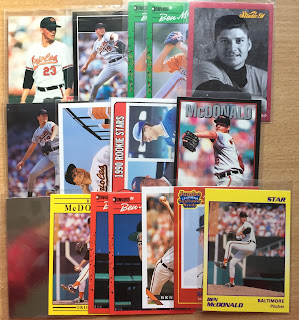 McDonald was a former #1 draft pick who was supposed to be a stud for the Orioles for years to come. McDonald pitched nine years in Major League Baseball and finished with a record of 78-70 and a 3.91 ERA.

Joe Magrane. I knew about my Dad's fondness for Joe Magrane . . . a Cardinal . . . but I never understood it. 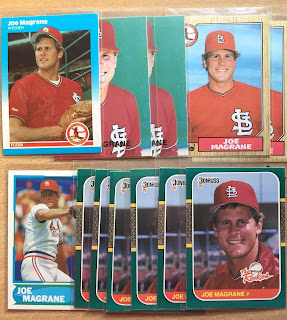 That's a lot of Magrane rookie cards! I turned them over and was wowed by Magrane's minor league numbers. Now I see what my dad saw in Joe Magrane!

Greg Olson, the Braves catcher, had only two G's in his first name. I collected Greg Olson back then, too, but I didn't seek out his cards. If I pulled them from a pack, then they went into the binder. Three of these were new for me: the '93 Topps, the Black Gold Leaf and the Score Select. 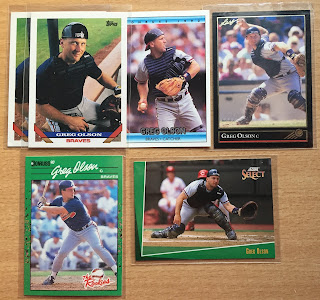 For the record, not many players in baseball history have had the last name of Olson, which is our family name, up until we started collecting. Then Greg Olson and Gregg Olson came along! 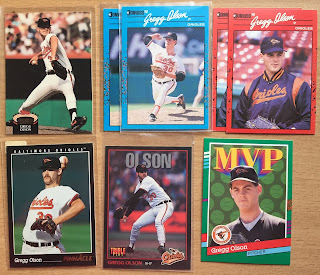 Gregg (three G's) Olson was the better player of the two. He was the AL Rookie of the Year award in 1989, an All-Star in 1990, and he finished his fourteen year career with 200+ saves. 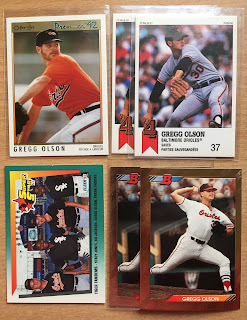 Most of what you see here was new to my collection. I think my favorite are those two Bowman gold parallels. Those are sharp looking! 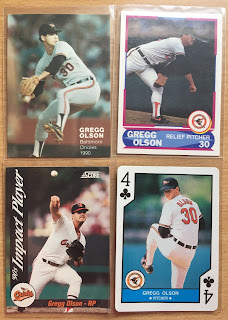 1990 Holsum Bread food discs! I've never seen these before and my dad had three of them!  Go figure! 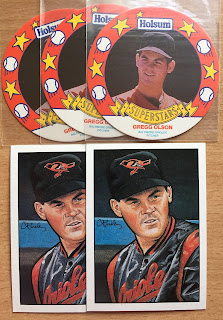 Before Greg and Gregg made it the Majors, Karl Olson was the only other Olson worthy of being printed on cardboard. I didn't start collecting Karl until recently, and these cards just helped to pad my collection, which I've palced in pages for my future viewing pleasure.

1952 Topps. That's about as vintagey as cardboard can get! Check out that old Red Sox logo by the name plate. 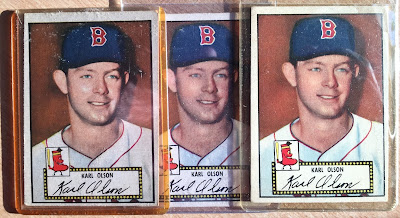 1954 Topps. Karl has a nice two-handed follow through on his swing. 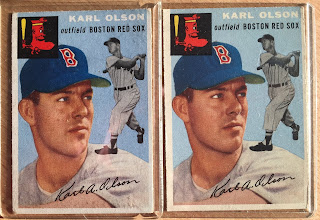 1955 Topps. How about that signature? You can actually read it! 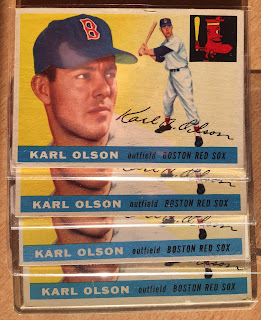 1956 Topps. Karl switches teams to the Washington Senators and is given a sweet sliding action shot on this card. Most stellar! 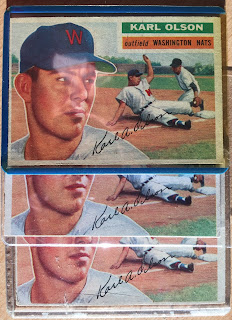 1957 Topps. A nice head shot finishes out the lot. 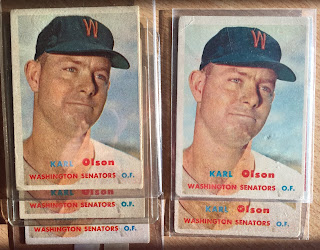 I don't know what these ran for back in the day, but I've been snagging them anytime I can find them in the $2 and $3 range at shows. When I was a kid I wasn't going to spend my hard earned cash on an old player I didn't know anything about. But now, they are some of my most treasured cards in my collection. It's funny how that works.

Thanks for stopping by and reading!