There were two packs hidden away in the box of goodies my dad gifted me. They were already opened, but they were new to me and perfect for another edition of Pack Wars.

In one corner we have 1994 Topps Series 2, boasting twelve picture cards. In the opposite corner is 1996 Topps Series 1, which also has twelve cards, which may or may not contain pictures. 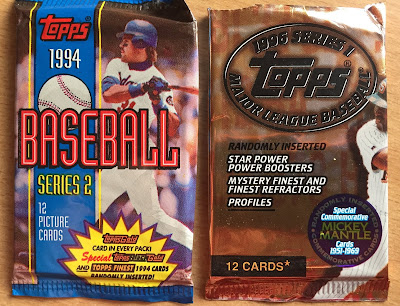 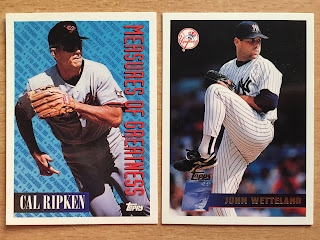 1994 Topps comes out swinging with a Cal Ripken subset card. John Wettleland is a Yankee and if this were Gint-a-Cuffs he would represent -2 points. This makes it an easy win for '94 Topps. 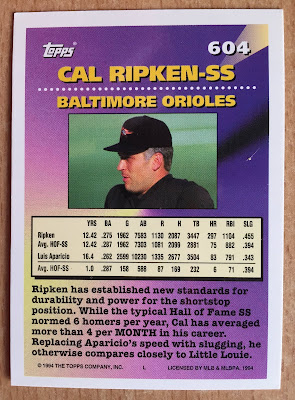 I don't know if I'd compare Ripken to Luis Aparicio. I suppose if you ignore the speed and slugging categories most players who lasted 12+ years would look fairly similar. No? 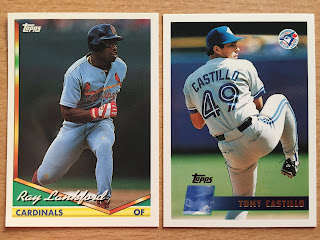 Round 2 allows us a look at the 1994 base design, but it's of a Cardinal. Ack. Tony Castillo? Who? Doesn't matter. Cardinals should be worth -2 points and not the Yankees. 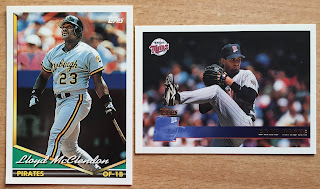 Lloyd McClendon is a former Cub, but I'll go with the horizontal Brad Radke card in this match-up. I feel the Radke card should be centered better or zoomed in, but I still like it enough for the win. 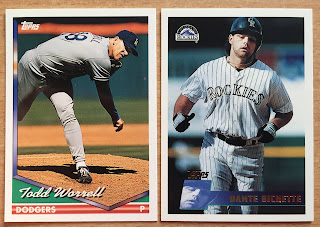 Todd Worrell had some good years as the closer for the Cardinals, so there's a strike against the '94 Topps offering. Dante Bichette, along with Larry Walker, Vinny Castilla and Andres Galarraga made Colorado a fun team to follow when I was growing up. 1996 Topps takes a commanding 3-1 lead! 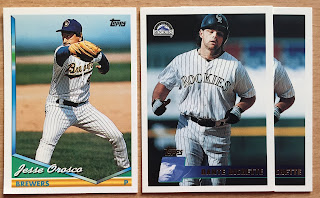 Dante Bichette tries to double up, but he is denied by Jesse Orosco, who is the all-time leader in games pitched. '94 Topps narrows the gap.  Collation issues. #SMH 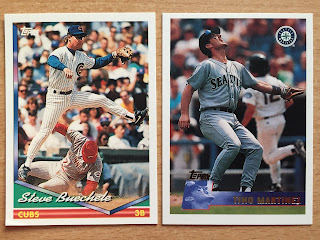 Ohhhh! An action-packed photo of Steve Buechele, a Cub, versus blogger favorite Tino Martinez. This is quiet the match-up, but I'll side with Tino and give a shout out to The Lost Collector in the process! 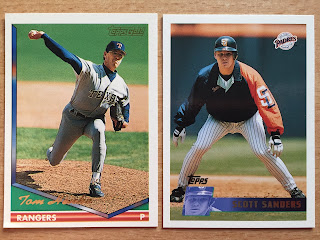 A gold parallel of Tom Henke versus a pitcher on the bases wearing his warm-up jacket. I'm not the biggest fan of parallels anymore. I think chasing all the 2017 Vogelmonster parallels kind of killed them for me. 1996 Topps seems to have my number as it garners another point, this time for uniqueness on cardboard. 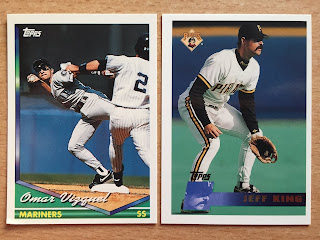 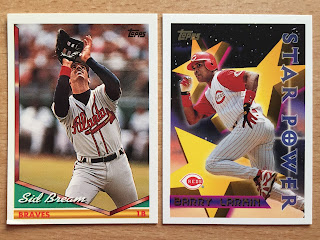 1994 Topps offers it's own unique photograph, with Sid Bream focusing on a pop-up. But, it's pretty hard to ignore cards of Hall of Fame players. Mathematically speaking, 1996 Topps has secured at least a tie in this match-up. 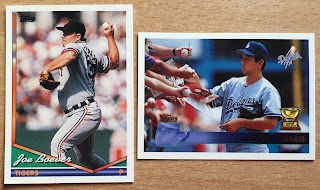 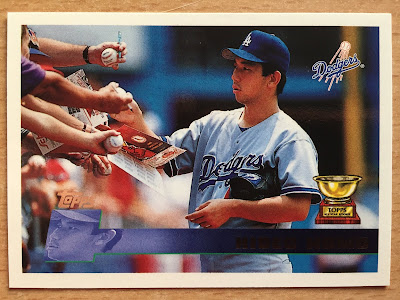 This card is a keeper and will be going in a binder.  1996 Topps locks up the victory with two rounds to go. 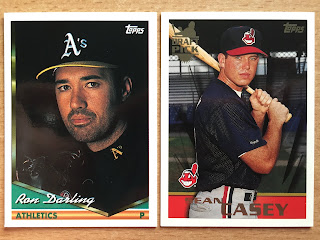 1996 Topps keep bringing the goods. I didn't know Sean Casey was drafted by the Indians until now. Ron Darling is an analyst, and I respect that he's still hanging around the baseball world, but I've always had a soft spot in my collection for The Mayor. 1996 Topps is running away with this battle! 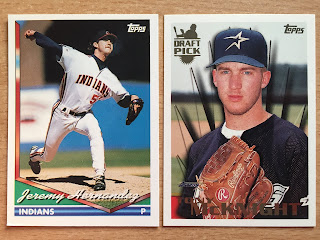 Jeremy Hernandez verus Tony McKnight. Talk about anti-climatic.
I couldn't decide between these two, but after further research I found Hernandez made his MLB debut against the Cubs and threw a shutout inning. Meanwhile, McKnight took the loss against the Cubs in his last MLB game. With McKnight being an easier punching bag for my Cubs, I'll have to side with 1996 Topps one last time.

For the record, if this contest finished all knotted up at 6 victories apiece I was going to side with 1994 Topps, because I think it has a better design. Outside of the minor collation issues, the card selection from the 1996 pack was stout and quite deserving of the win.