My school district always gives us a five day "fall vacation" centered around the Thanksgiving holiday. It couldn't have been timed much better as I was running on fumes and needed a respite to recharge my battery.

How did I spend my time? Well, on Wednesday I hit up the bowling alley and got three practice games in. I'm in a couples league that bowls every other Sunday and this is my second year in the league. Last year I used an alley ball and bowled a straight ball. During the off-season I bought my own ball and have experimented with a hook. 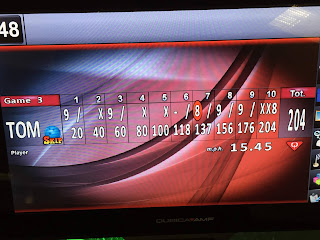 The practice is paying off. I will still roll an errant gutter ball from time-to-time, like I did in the 6th frame, but I'm connecting for more strikes and less splits. I've raised my average about twenty pins since last season and this game marks the first time I didn't have an open frame in a game since I can remember. It was a nice way to start the break!

On Thursday, Laura and I hosted Thanksgiving at our house. My parents tend to host more often than not, but both of them have had joint replacement surgeries in the last two months. For what it's worth, I'm super proud of the way they have stuck with their physical therapy and have bounced back. I'll also say that I continue to me impressed by wife of 15+ years. She invited one of her patients, who didn't have anywhere else to go, to our family Thanksgiving dinner. It was such a kind gesture and one I think the older gentleman truly appreciated.

Laura and I opted for a quick two-day getaway to St. Louis on Friday and Saturday. We had lunch at one of my favorite restaurants in the area, Pi Pizzeria. I'm a math teacher and I love pizza... it's an easy win. Except, there was drama! 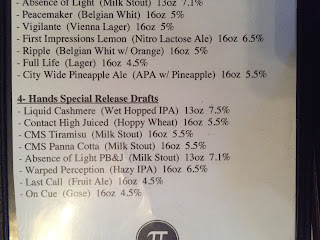 I wanted to sample 4-Hands CMS Tiramisu milk stouty, but they were all out. During the winter months I tend to favor the stouts, so I tried again and went with their CMS Panna Cotta milk stout instead.

Here's proof that such a beer does exist: 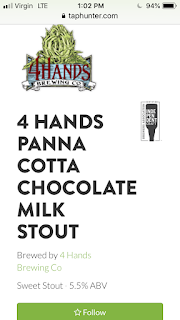 But, this is what arrived: 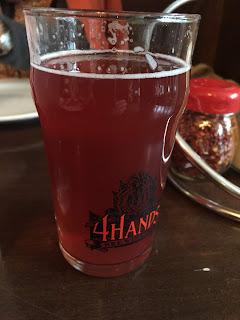 That doesn't look like any stout that I have ever tasted. Plus, it was super fruity.  I asked the waiter if he was sure this was the stout I ordered and he replied, "Yes, it's pretty unique for a stout."

If by unique he meant, "Not a stout," then he would be correct. 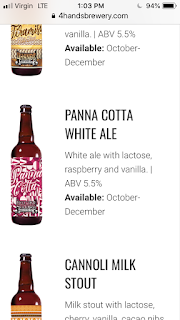 Above is a list of the beers that 4-Hands is currently producing. There was no Panna Cotta stout listed, just the white ale with raspberry and vanilla, which was what I was tasting. Argh.  For the record, if you need a nice summer ale after mowing the yard, then I would suggest the Panna Cotta White Ale. But hear me now . . . IT. IS. NOT. A. STOUT.  Obviously, the restaurant misprinted the beer list and their poor, misguided waiters were spewing nonsense. 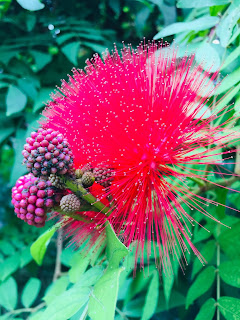 Boom! How about the colors in that picture! Laura and I visited the St. Louis Conservatory and I found this flowering tree in their Climatron. Striking!
Oh, and Laura purchased two more house plants at their gift store, which puts her collection somewhere in the whereabouts of 63 house plants. I'm still surprised our cats leave them all alone.

Here's Laura at lunch before we headed back home on Saturday. She's about ready to enjoy some Arabic coffee from a fancy tea set. 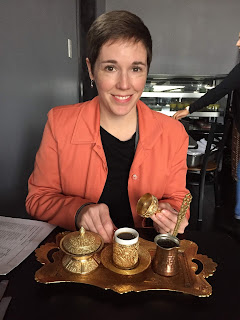 I think it's a great picture of my better half. Don't tell her, but she could fit 163 plants in our house and I wouldn't say a peep.

When we returned home I found this awaiting me in the mailbox: 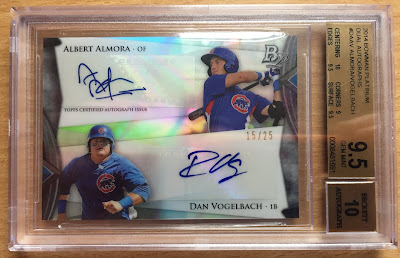 Overall, it was a vacation of family, food, and travel that was exactly what I needed.