As a Cub fan, this is one of my favorite pages as Dawson and Santo both make appearances. There's also a couple of guys (Alomar and Larkin) who I can remember playing during the length of nearly their entire career. Good stuff overall, and it'll look much better once I take the time to track down the missing card in the lower-right corner. 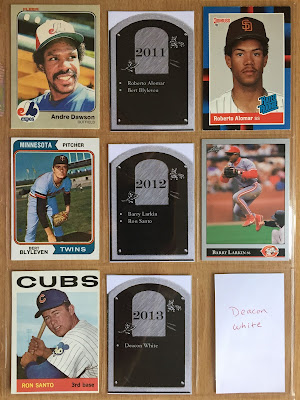 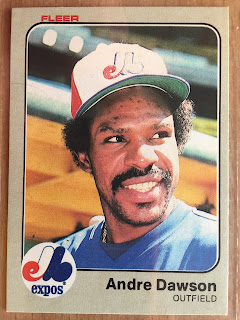 Andre Dawson had some bum knees. There are stories out there about him icing after every game and how the turf in Olympic Stadium was going to ruin his career. At age 32 Dawson signed a very team friendly contract to play in Chicago in 1987 to get away from the turf, and that season he hit 49 homers and won the MVP award for a last place Cubs team. He won over the hearts of Cubs fans that summer. During his twenty-one year career he spent eleven season with the Expos and only six with Chicago, but he'll always be a Cub in my book! Dawson was a 20-20 guy five times with Montreal and finished his career with 438 round trippers, 304 stolen bases and 0.277 average. 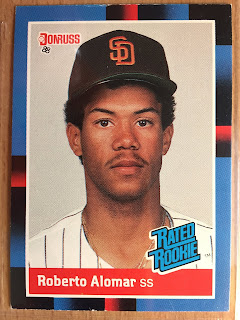 Roberto Alomar was a special talent. He was a 0.300 switch-hitter who could take a walk (0.371 OBP), steal a base (474 SBs), and knock in runs (200+ HR and 500+ doubles). Alomar was elected to twelve All-Star games, he won ten Gold Gloves, and he was also a Silver Slugger four times. This '88 piece of Donruss junk wax is a bit dinged up, but it works for this project. Plus, I'm sure I get bonus points for the Rated Rookie logo! 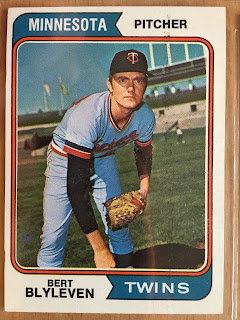 I pulled a lot of Bert Blyleven cards during the late 1980s and I didn't really think much of it. He never seemed like Hall of Fame material in my eyes, but here he is on Page 35. Blyleven pitched for 22 years and accumulated 287 wins, he punched out more than 3,000 hitters, and he recorded an ERA of 3.31. Blyleven was an All-Star in 1973 and again in 1985, and he won two World Series titles during his career. What I find interesting about Blyleven's career is that he was drafted out of high school in 1969 and he was a fixture in Minnesota's rotation less than a year later. That doesn't happen anymore! 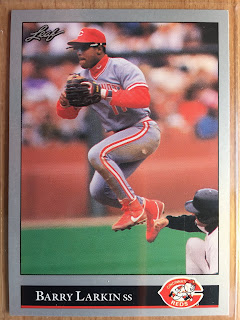 Barry Larkin was one of those shortstops who helped bridge the old school mindset of (all field, no hit) to the current do-it-all shortstop we have in today's game. Larkin was a career 0.295 hitter who cracked 198 homers during his nineteen year career and is a member of the 30-30 club. He had trouble staying healthy from time-to-time, but when he was at full strength he was capturing Silver Sluggers (9), Gold Gloves (3), and All-Star appearances (12). 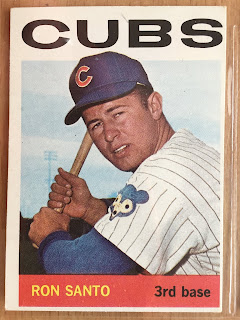 Ron Santo's posthumous election to the Hall of Fame in 2012 was bittersweet for many Cubs fans. Santo retired a handful of years before I was born, so I never got to see him play. Yet, I knew a good deal about Santo from reading about the 1969 Cubs, watching This Old Cub and listening to Cubs broadcasts. The man wore his heart on his sleeve during radio broadcasts, which as a fan I truly loved. Santo was the best third baseman during the decade of the 60's in the NL. During his career he was a nine time All-Star, he won five Gold Gloves and he slugged 342 homers while batting 0.277. 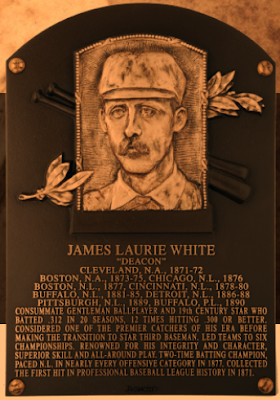 No Card -- Deacon White
I think the HOF plaque sums up his career quite nicely, but I would like to add that Deacon White didn't play more than 100 games in a season until his 13th season. During his first two years in Major League Baseball he played in only 49 games total, which was EVERY game Cleveland played. He finished his career with 2,067 hits, but if he played a 162 game schedule for 20 years his career spanned, then he would have racked up 4,000+ hits. I understand that is a big "what if," but I think it should be noted White was an exceptional hitter.

I'm not sure why I didn't start doing this earlier on, but substituting a picture of the player's plaque when I don't have a card should have been a no-brainer. Sometimes I'm a little slow I guess. For what it's worth, Deacon White has a card in the 2012 Goodwin Champions set, which I'll certainly pick up next time I make a Sportlots.com order.

My favorite card from this batch: the 1983 Andre Dawson is fantastic. The '83 design is a little bland, but Andre is rockin' the Expos hat and that smile is contagious. Great photograph for a great man!