Maybe you recognize the town of Dyersville and maybe you don't. For the uninitiated, Dyersville is home to the Field of Dreams movie site. I believe this was the 4th annual "Team of Dreams" event and the local card collecting community has jumped on board by scheduling a show the morning of the main event. 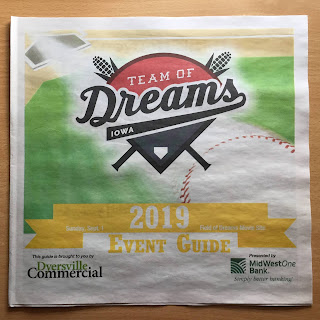 This year the event was able to secure a few notable baseball names plus some cast members from A League of Their Own and The Sandlot to speak, sign autographs (very pricey!) and play in a celebrity softball game.

About two weeks ago I asked my buddy Jim (far left) if he'd like to go on a baseball themed road trip on the first day of September. He responded with an enthusiastic, "Yes!" 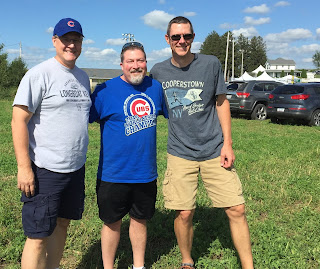 Oddly enough, when we arrived we parked right next to another one of our friends, Craig (center), who was enjoying a similar trip with his girlfriend. We had no idea he was going to be there, but it was really great to hang with him for a bit!  If you look above the cars in the picture you'll see the farm house from the movie.

Here's a better shot of it: 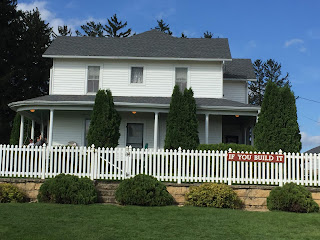 The field was in top form. I was afraid the grass would be brown, because of the dry weather we've had most of the summer. The corn was at optimal height, which was also a concern because of the really wet spring we experienced. 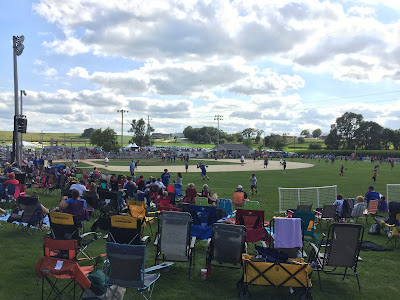 Bleachers were brought in, but many people brought their own lawn chair. All kinds of people were enjoying a "catch" on the field before the festivities began.

At 4:30 a Q&A session was held with Mike Boddicker (an Iowa native) and David Ross. I ponied up for the good seats near one of the dugouts so we would have a good view of the interview and the celebrity softball game. Ross talked quite a bit about the 2016 team, the World Series, his role as an announcer for Sunday Night Baseball and his time on Dancing with the Stars. Boddicker did a nice job, too, although I was pretty unfamiliar with him until this time. 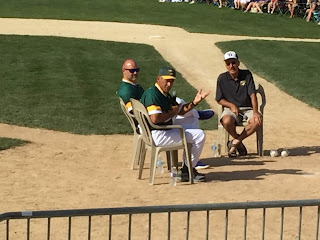 Earlier in the day there were autograph opportunities, a silent auction, and couple of sports vendors selling their wares. I picked up this Josh Gibson bobblehead from the same dealer Henry visited at The National. 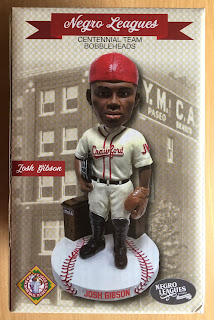 The vendor was very friendly and was impressed how Jim knew about how Hank Aaron used to bat with his right hand below his left. For what it's worth, Jim purchased the Hank Aaron bobblehead featuring this awkward bat grip.

After the Q&A session the grounds crew got the field ready for a game of slow-pitch softball. There were quite a few local players, sponsored by local businesses, who filled the last innings of the game after the celebrities exited.

But, here were the main attractions for each team. 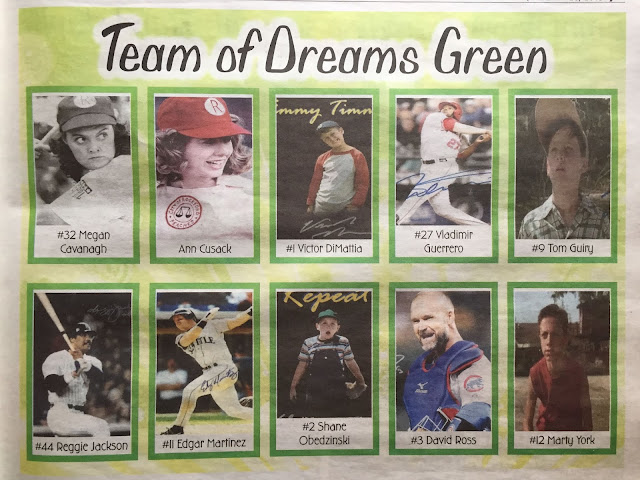 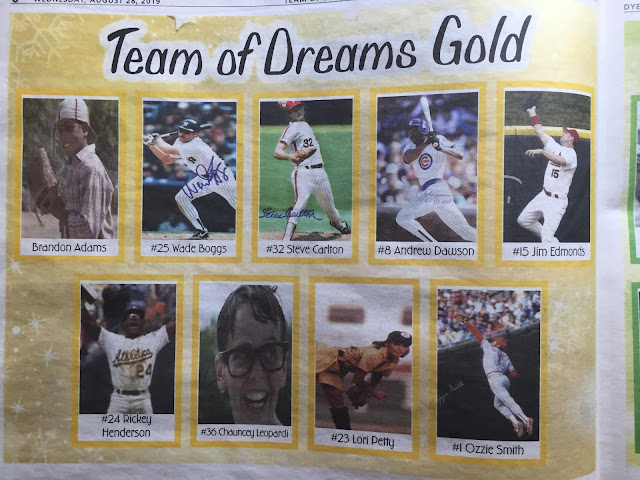 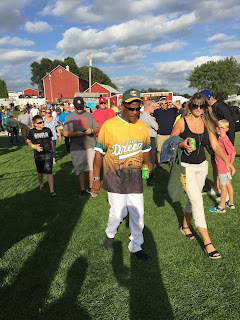 Here's a quick picture of David Ross getting ready to bat. This was before he and Boddicker were mic'd up to add further entertainment to the evening. 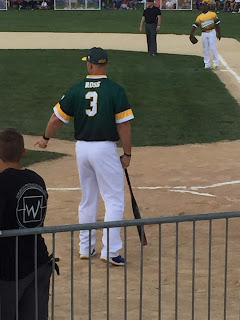 I think my favorite part was after a couple of the actors from The Sandlot combined for three errors in the same inning and David Ross questioned, "How did you guys ever beat that other team in The Sandlot!?!" That got a huge laugh out of the crowd.

Here's a picture of the event from a drone that was flying overhead. Very cool!

Earlier that morning Jim and I spent a couple of hours at the card show. I bought eighteen cards in all, but only seven were for myself. The other eleven are eventually going out in trade packages. There weren't any dime boxes, but there was plenty of discounted vintage and oddballs to look through, which accounted for much of what I purchased.

My mom gave me one of these Cubs glasses on Saturday. It was given to her by her cousin and had been sitting in a cabinet for many years. I found it's mate on Sunday (the very next day) for three bucks and couldn't pass it up! How 'bout that! 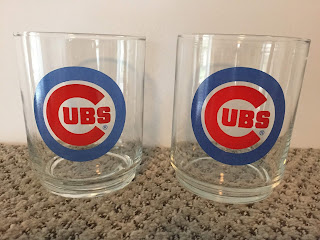 On to the pictures of grown men on little pieces of cardboard! 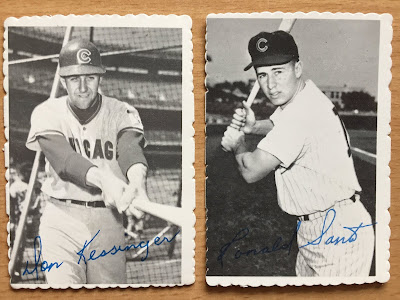 I found this Bryant die-cut to be too good of a deal to pass up. 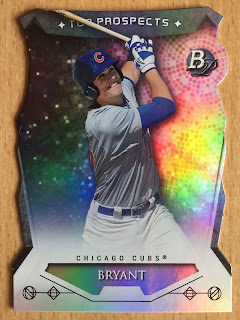 I am now ONE card away from completing the master set of 2018 Topps Big League. 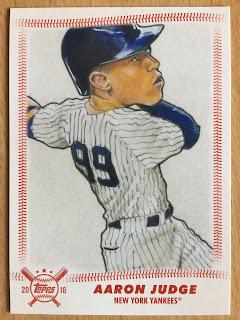 Has anyone seen the Bryce Harper from the Caricatures insert set?

How about some discounted vintage to upgrade my Hall of Fame binder?  The Rabbit Maranville is from 1961 Fleer and the Larry Doby is NOT from 2019 Topps Archives. 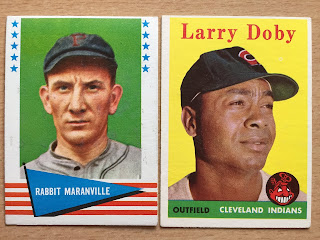 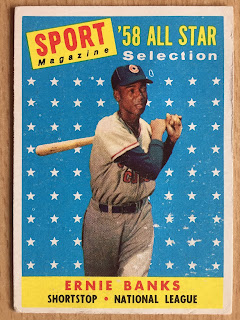 I don't usually buy vintage Cubs unless I find a great deal, and this one could be called just that. Plus, that design!  Oh, my!

Jim and I spent about six hours in the car, but the time flew as we talked baseball most of the way to Dyersville and back. The card show was the best one I have been to this year, but that's only because I haven't made it up to Orland Park yet this year. The event at the movie site was very unique, and the weather was near perfect, but I don't know that I'll ever make the trip again. It was well done, but kind of one of those things you do once to check off your bucket list.

I hope you had a fun Labor Day weekend, too!