Here. We. Go.  An entire page of guys we all remember from their playing days. And even better yet, two entire classes (with markers) fit perfectly within one 9-card page. Wonderful! 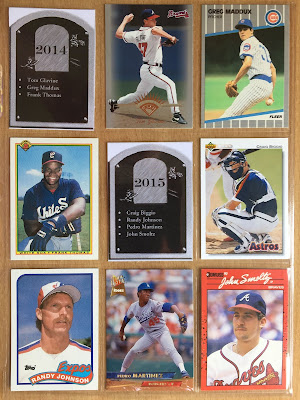 I think I'll try something a little different this week. I'll give you a brief rehash of the players' careers and throw a random stat at you as well. 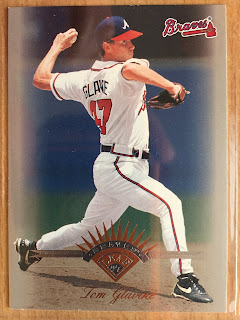 Tom Glavine will forever in my mind be remembered as the guy who was given four extra inches off the outside corner of the plate. And boy, would he ever pound that part of the strike zone! Glavine lead the league in wins five years and finished with a record of 305-203. His career ERA comes in at 3.54, and would look much better if you removed a couple of seasons at the beginning and end of his career. Glavine won two Cy Young awards, four Silver Sluggers and was elected to ten All-Star games. He won the World Series MVP in 1995 when the Braves captured the crown.
Did NOT Realize Stat: For as much as most people make of Glavine's control the numbers are kind of to the contrary. His career BB/9 mark is 3.6, which isn't bad, but not what I assumed. Also, his 5.9 K/9 mark is certainly atypical of most pitchers today. Perhaps not working deep into counts allowed him to top the 200+ inning mark fourteen times! To put that in perspective, only thirteen pitchers tallied 200+ innings in the 2018 season. 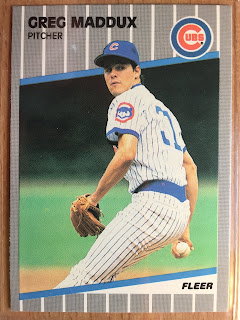 Greg Maddux was once a Peoria Chief, but unfortunately he played in Ptown before I started attending games. During his career he won four Cy Young awards, four ERA titles (twice under 1.70) and was elected to eight All-Star games. Maddux is tenth all-time in strikeouts and he finished with a career ERA of 3.16 and a win-loss record of 355-227 over twenty-three seasons. Oh yeah, I'd me remiss if I didn't mention the eighteen Gold Gloves.
Freaky Control Stat: During Maddux' most dominant stretch, 1992-1998, Maddux wasn't letting anyone take him deep or earn a free base. He averaged 237 innings pitched, 37 walks and only nine home runs allowed. Wow. 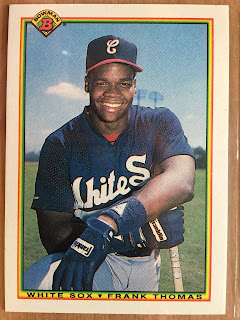 Frank Thomas was my introduction into prospecting. I missed the Ken Griffey, Jr. experience by this much, but it opened my eyes to the next big thing. At 6'5" and 240 pounds, he was rather big! Thomas was that perfect combination of average (0.301 AVG), power (521 HR), and patience (0.419 OBP). Thomas won two MVP awards, one batting title, four Silver Slugger awards and was elected to five All-Star games. The stat lines Thomas put up during the first eight years of his big league career were Gehrig-esque.
Eye Opening Stat: Thomas had 106 runs, 101 RBIs, and 109 walks, with 73 extra base hits and a 0.353 batting average in his second MVP season. That may not be as impressive as it sounds until one realizes this was the strike shortened 1994 season and he played in only 113 games. 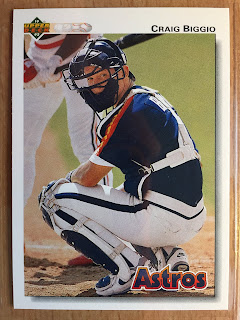 Craig Biggio was my favorite of all the Killer B's in Houston. During his career he was an absolute menace. Biggio was in the lineup everyday, he could steal a base (5 seasons of more than 30) and he had extra base power (11 seasons with 50+). Biggio was a seven time All-Star, he won four Gold Gloves and was awarded five Silver Slugger awards. In all, he played twenty seasons, all with the Astros, and he finished his career with a 0.281 batting average and 291 homers.
Lesser Known & Painful Stat: Biggio lead the league in hit-by-pitches five times and is second all-time in the category, behind fellow Hall of Fame member Hughie Jennings. 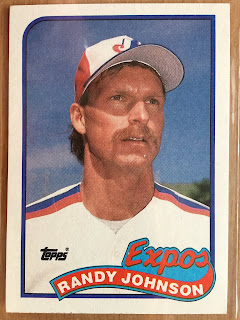 Randy Johnson may be my favorite pitcher ever. He was a thrower who figured it out and learned how to pitch. Throw in his genetic make-up and you have one heckuva Hall of Fame pitcher. The Big Unit won five Cy Youngs, the pitching Triple Crown, four ERA titles, was a World Series MVP with the Diamondbacks in 2001 and he was elected to ten All-Star games. Johnson finished his 22 year career with 303 wins and 166 losses, a 3.29 ERA, and he is second all-time in strikeouts with 4,875.
Aging Like a Fine Wine Stat: Johnson won four of his five Cy Young awards consecutively during his age 35-38 seasons. During that stretch he averaged 19 wins, 257 innings, 361 strikeouts and a 2.54 ERA. Zoinks! 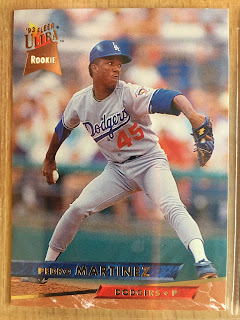 Pedro Martinez was about a foot shorter than Randy Johnson, but he was no less dynamic. Pedro won three Cy Youngs, a pitching Triple Crown, was elected to eight All-Star games, and won five ERA titles. During his career, he pitched for eighteen years and he boasts a career win-loss mark of 219-100, an ERA of 2.93. Martinez is also 13th on the all-time list of strikeouts with 3,154.
Winning Stat: Pedro has the third highest winning percentage (0.687) of any HOF pitcher behind Al Spalding (0.795) and Whitey Ford (0.690). 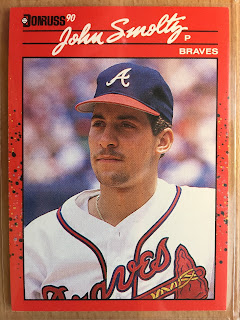 John Smoltz was more of a power pitcher than his craftier Braves counterparts. He lead the league in wins in 1996 and 2006, but was a closer for four seasons in between and recorded 154 saves during that span. Smoltz was an eight time All-Star and the winner of a Cy Young, Silver Slugger and Rolaids Reliefs award. He finished his career with a record 215-155 and 3.33 ERA.
Digging Deeper Fact: During his career, Smoltz was the winner of Roberto Clemente Award, the Lou Gehrig Award and the Branch Rickey Award.

Oh, this page makes me smile. Overall, there's just a bunch of great baseball talent I remember from my youth. How cool is it that Glavine, Maddux and Smoltz all made it onto the same page? I'm really glad that worked out the way it did.

Most of the cards are from early in the player's career, save the Glavine offering. Perhaps I'll go back into my trade box and see if I have any junk wax to fill the slot. Although, the Leaf card is shiny and I've always had a soft spot in my heart for shiny.

The Craig Biggio card is my favorite on this page for a number of reasons. First, it's a reminder of his versatility and how adept he was at three different positions up the middle. Second, what a unique picture! It reminds me of my catchers looking into the dugout when I'm calling pitches during a game. Very cool!
I'll give a hat tip to the Frank Thomas Bowman card. It just screams, "Welcome to spring!" Plus, it's difficult to bypass the Big Hurt's infectious smile.

That concludes this stellar page and there's only a few left.