Some of the biggest names in cardboard from the last 30+ years are on this page. I think one of the reasons people love baseball so much is the history of the game. You have all of these numbers which helps one compare the greatness of Johnny Bench versus Pudge Rodriguez. I'm not sure which camp I belong in there, but I do know Pudge has way more cardboard offerings than Bench ever had.

Let's dive into this week's page and see which cards I chose to represent some of our more recent inductees into Cooperstown. 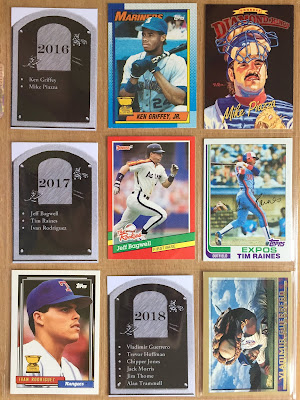 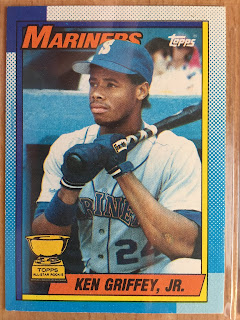 Ken Griffey, Jr. is noted for having the sweetest swing of his generation. He was a tremendously gifted athlete and known for robbing sluggers of potential home runs. Griffey was elected to thirteen All-Star games, and he collected ten Gold Gloves and seven Silver Sluggers during his career. He won the AL MVP in 1995 when he helped carry Seattle to the post season for the first time in franchise history. The Kid finished his career with 630 homers, 2,781 hits and a 0.284 batting average. If he could have stayed healthy during the latter part of his career Griffey would have easily topped 3,000 hits and 700 round trippers. 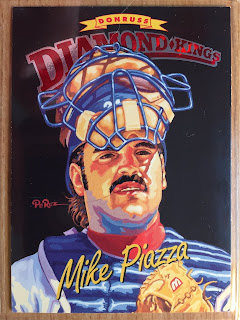 Mike Piazza might be known as the best slugging catcher of all-time. 396 of Piazza's career 427 home runs came as a catcher, which rank him #1 at the position. Piazza put together a six year stretch during the beginning of his career where he averaged 33 homers and 100+ RBI while batting 0.335. Those are some ridiculous numbers coming from any position player, let alone a backstop. Piazza, the 1993 Rookie of the Year, was a twelve-time All-Star and he earned ten Silver Slugger awards. He finished his career with 2,127 hits, a 0.308 batting average and an OPS of 0.922 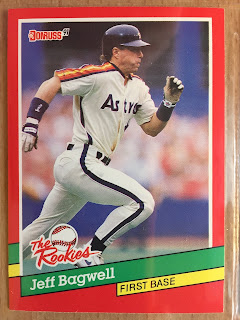 When I hear Jeff Bagwell's name the first thing that pops into my head is that weird crouch of a batting stance of his. It may have been different, but it provided results. Bagwell was the Rookie of the Year in 1991 and the MVP in 1994, when he had a slugging percentage of 0.750. He only played fifteen years, and if he would have stuck around a few more years his career home run total of 449 probably would have reached 500. Bagwell, part of the Killer B's in Houston, was twice a 30-30 performer and he finished his career with 202 steals and 0.297 batting average. 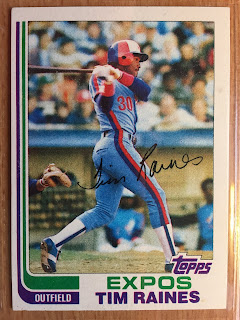 Tim Raines, for my money, was an underrated ball player during his prime. There have been only a few ball players who could boast such numbers during their career and Rock Raines just happened to be playing north of the border when Rickey Henderson was starring in the Big Apple. Everyone talks about Rickey, but Raines, during his first seven seasons was as dynamic as any offensive player in the game. The switch hitter hit 0.310 with a 0.396 OBP and averaged 72 steals during that seven year stretch. Overall, he was a seven-time All-Star, a Silver Slugger recipient and he won the NL batting title in 1986. Raines finished his career with 2,605 hits, 170 homers and a 0.294 batting average. 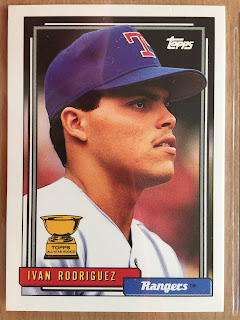 Ivan Rodriguez was a fourteen-time All-Star, an MVP in 1999, and he collected seven Silver Slugger awards. Pudge hit 311 homers and batted 0.296 for his career, but it was his defense that I remember best. He could block pitches, call a great game and handle a pitching staff . . . but that arm. Man, that arm. Rodriguez would send rockets down to any of the three bags, without warning, from his knees. In all, he threw out 46% of all would-be-base-stealers and he claimed thirteen Gold Gloves. He was truly a special talent. 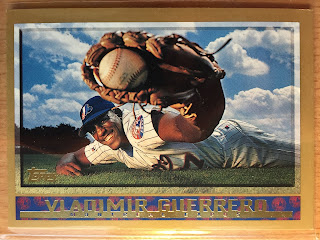 Vladimir Guerrero finished his career with 449 home runs and 0.318 batting average. Vlad was twice a 30-30 member, he won the AL MVP in 2004, he was elected to nine All-Star games and he was awarded eight Silver Slugger awards. Guerrero had a cannon for an arm in right field, but hitting was his calling card. He could hit anything thrown up to the plate from his nose to his toes. I always had a soft spot for Vlad the Impaler on my fantasy baseball rosters. Not only could the man rake, but he had an awesome nickname and seemed to be a fun loving dude.

My favorite card on the page this week is the 1997 Topps Vlad Guerrero. Sure, it's a posed shot, but it's so unique. Plus, a smiling Vlad for the win! Now, if I had an '89 UD Griffey, then that would surely be my favorite, but I've never broke down and bought one.

The '90 Topps Griffey and the '92 Topps Rodriguez both sport the Rookie Cup, which I'm partial to. Honestly, if I had nothing but Rookie Cup cards on any given page I think I would be okay with it.  The Donruss Bagwell serves as a nice nod to the many boxed sets from the '90s and I'm glad to finally add a Diamond King to the binder. Throw in a Tim Raines card where he's wearing the powder blue road Expos uniform and I think this page is truly a winner!