Only six cards this week as the markers for the election years take up a third of the page. I, for one, really like how the markers make it super easy to track down players and HOF induction classes. Thanks again to Wrigley Wax for making such a great contribution to my project. 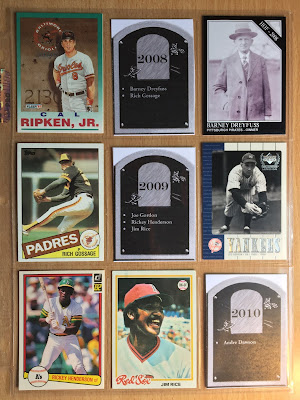 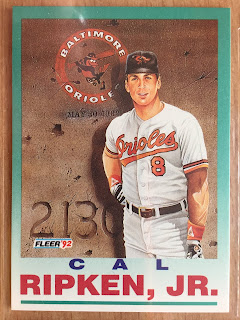 I figure most of you are familiar enough with Cal Ripken, Jr.  After the strike shortened season in 1994, Ripken's consecutive games played streak put baseball back on the map. Ripken debuted in 1981, won the Rookie of the Year award in 1982, and then was an All-Star for the next nineteen seasons until her retired. Sprinkle in two MVP awards, to All-Star MVPS, two Gold Gloves, eight Silver Sluggers, 3,000+ hits, 400+ homers and a World Series title in 1983 and you've got a player who did it all. 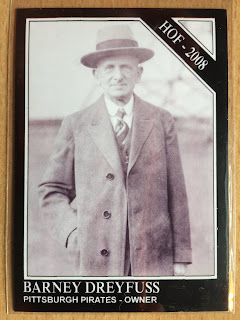 Hmmm... I don't think I meant include Barney Dreyfuss in my HOF (Players) Binder. There are a number of executives and other contributors enshrined in Cooperstown, and I guess if I had to accidentally include one of them, then Dreyfuss would certainly be worth the pick. He's credited as one of the "Founding Fathers" of the World Series and installing the first upper deck, at Forbes Field. 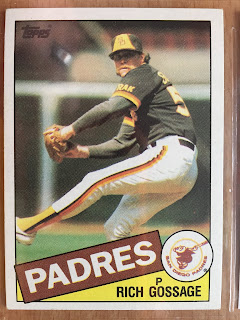 Goose Gossage was one of the great early closers in our game. He was a Rolaids Relief Man and he lead the league in saves twice on the way to earning 301 saves overall. Gossage played twenty-two years and pitched for nine different franchises. He was a nine time All-Star and helped the Yankees to a World Series title in 1978. If you think Gossage enjoyed life as a closer, then you should compare his 1976 stat line as a starter with the White Sox and to how effective he was a closer with the Pirates the very next year. Night and Day difference! 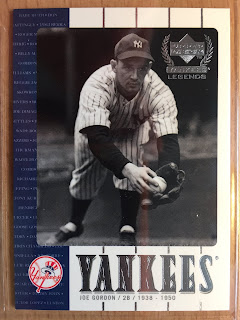 Joe Gordon won five World Series with the Yankees during his eleven year career. He missed two years in the middle of his prime playing days due to military service during World War II. Gordon was a power hitting second baseman (253 home runs) who was an All-Star selection nine times and the AL MVP in 1942. 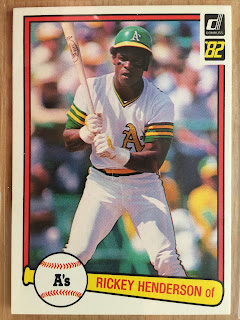 Has there ever been more of an explosive runner than Rickey Henderson? He is to stolen bases (1,406 career steals) as Nolan Ryan is to strikeouts. Both will own those records forever. Henderson was a career 0.279 hitter, and he offered pop (297 homers) and plenty of patience (0.401 OBP) to be perhaps the greatest lead-off hitter of all-time. He won a pair of World Series titles, an MVP in 1990 with the A's, a Gold Glove, three Silver Sluggers, and he was elected to ten All-Star games. Plus, he had oodles of personality! 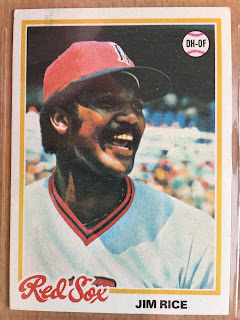 Jim Rice played all sixteen years of his career patrolling Fenway Park for the Red Sox. He was an All-Star in half of his seasons, led the league in home runs three time, and he won two Silver Sluggers and the MVP award in 1978. Rice hit 382 homers and batted 0.298 during his career.

Card of the page? That's an easy one for me . . . how about that 1978 Topps card of a laughing Jim Rice? Most excellent!  Although, the Ripken card is a close second.

Overall, it's a solid page, but I'm leaning toward taking Dreyfuss out, which would move The Hawk to the final card slot of this page. I wanted to keep the binder player focused, because they are what makes the game go. What do you think?