One Gesture, Two Made Days

Sometime back I learned that one of our maintenance guys at the high school I work at was once in professional baseball. I don't know him very well, but he knows I help coach the baseball team, and I respect the hell out of his work ethic. We always wave at each other or say 'Hi' when close proximity. He's such a jovial fellow I always leave with a smile on my face after seeing 'Berto.

Being the baseball minded individual that I am I had always wanted to type his name into baseballreference.com and take a gander at his career. I'm embarrassed to say I didn't learn 'Berto's last name until recently and I was too shy to ask up until that point. He did pretty well for himself, especially when he played with New Jersey! 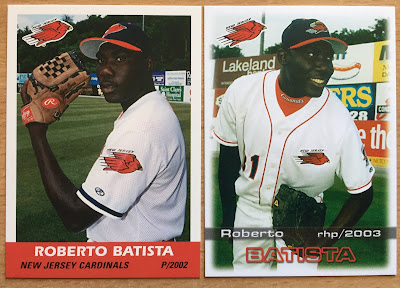 A couple of months ago I tracked down the two minor league cards you see above. I decided to sit on them for awhile, mostly because ... well... I wanted one signed but I was too embarrassed to ask. But also, what if this was a chapter of life he didn't want to talk about? Maybe he's bitter about his career ending before making it to the show? You just never know.

So, I decided to wait until today. Today was the last day before winter break. EVERYONE at a high school is in a good mood on a day like this. (Well, maybe not the students taking semester exams.) But, I figured why not?

I put the card on the left in a one-touch case and grabbed a sharpie for the other. If I was going to get one of the cards signed it would have to be the one of him smiling. He's always smiling!

At the end of my day and the beginning of his I tracked down 'Berto. He had his earbuds in while getting ready for work and he was talking to his wife. I motioned that I wanted to chat real quick and asked his wife to hold on for a second.

I explained that I collect baseball cards and signatures when I could get them and how honored I would be if he would sign his card for me.

He seemed completely shocked that anyone would ever possess his baseball card. His face immediately lit up and started talking to his wife again about how a guy at work has one of his cards and how he's asking for an autograph. He kept repeating how he couldn't believe it. 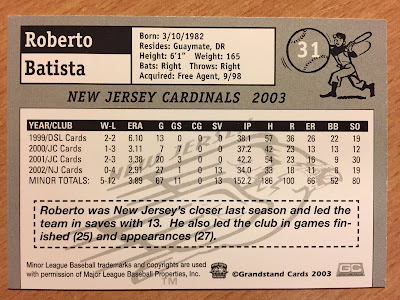 I think if another individual would have walked in at the point in time they would have thought we were two little kids having the times of our lives. Honestly, I think we both were.

I asked him when the last time he autographed something for a fan was and he replied he hadn't signed for anyone since 2006. He passed the card back to me but not before gently blowing on the ink to make sure it wouldn't get smudged.

I then told 'Berto how I hadn't been completely upfront with him and how I didn't have just one card. I had a second which I wanted to give to him. He was completely taken aback. He mentioned how this is only the second card he has from his playing days. The other one was given to him by his mother, who has since passed. He was genuinely touched and the smile, already ear-to-ear, grew even more.

I told him thank you for the autograph and I held out my hand. 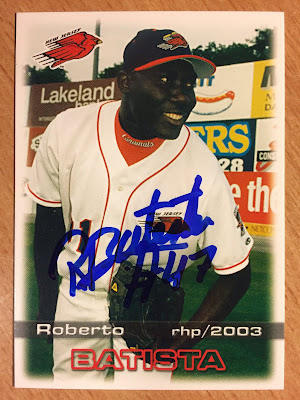 That wasn't going to do. 'Berto grabbed me by the shoulder and brought me in for a man hug.